About Container Ship blocked in the Suez Canal! 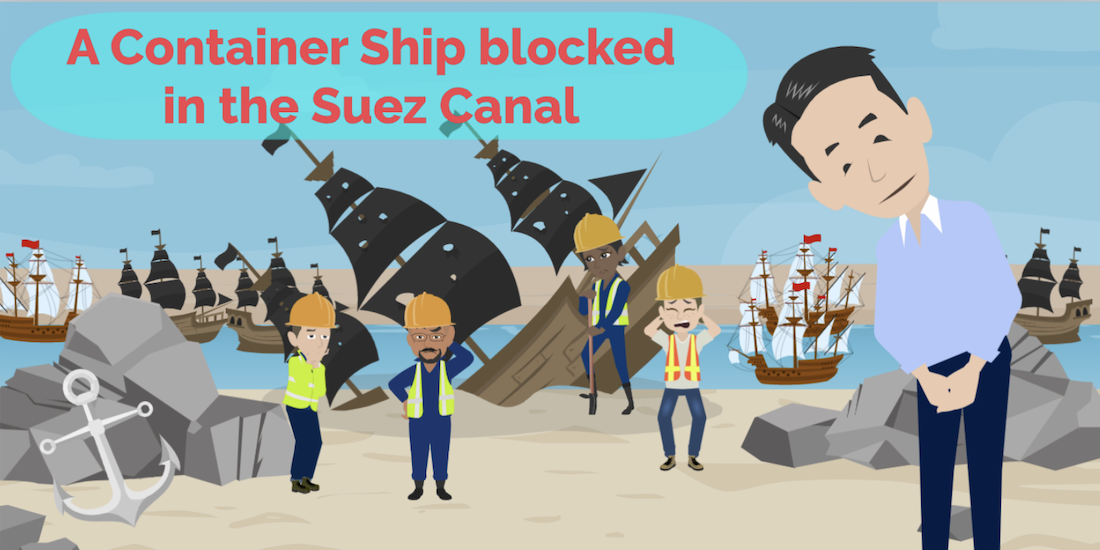 Today, I’d like to talk about the globally known topic, the ship stuck in the Suez Canal. 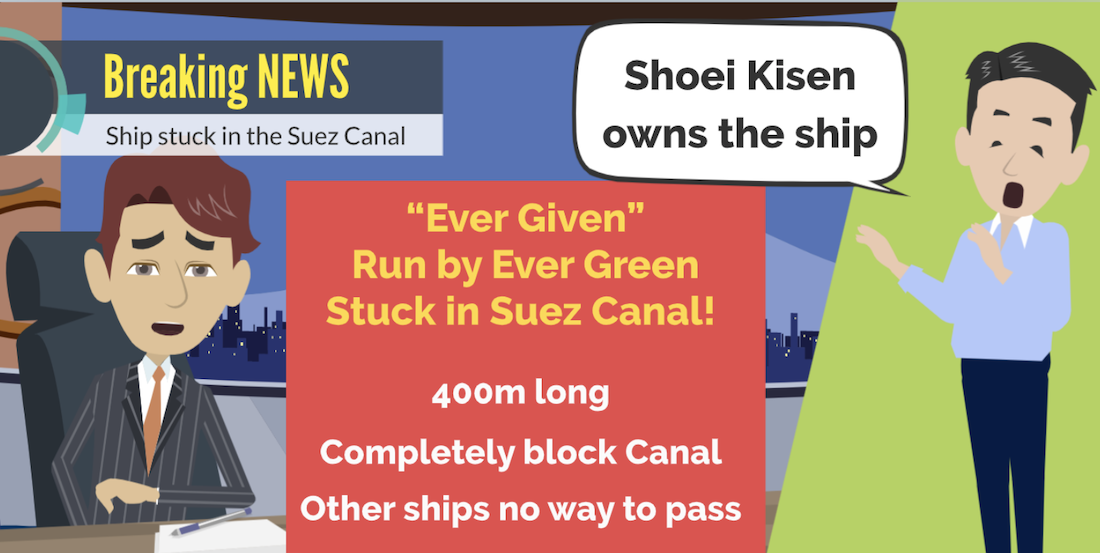 On the 23rd March, the news was broadcasted that, a container ship called “Ever Given” which is run by Ever Green got stuck in the Suez Canal.

The problem is, the Ever Given ship is 400m long, and is large enough to completely block the Suez Canal, which means the other ships have no way to pass through the canal.

By the way, the owner of this ship is a Japanese company called Shoei Kisen.

The Suez Canal is a water channel, linking the Mediterranean Sea to the Red Sea, connecting Asia and European countries in the shortest distance.

About 12% of global trade goes through this canal.

This canal is very important for global logistics, and is used by about 50 vessels a day, and about 19,000 vessels per year.

Why Vessel blocked the Seuz Canal

So, the reason that it got stuck is, the vessel had electrical troubles.

In addition, due to strong winds and a sand storm, visibility was very poor, which caused the ship to be grounded. 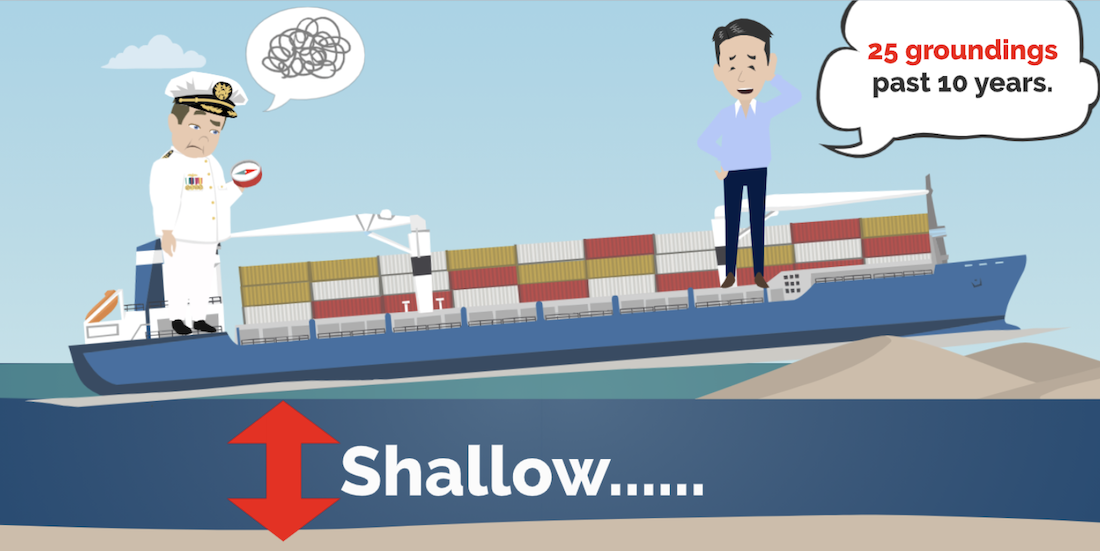 In many cases, the reason that a ship becomes grounded is caused by operating navigation error. The Suez Canal is relatively shallow, therefore this kind of accident tends to happen.

Actually, this ship being grounded is not the first, there were 25 groundings in the past 10 years.

At the moment, they are trying to dredge sand around the bow of the ship, and use tugs to pull and push the ship.

However, as of the 27th March, the recovery operation has not been successful, and there are now about 300 ships waiting near the Suez Canal. 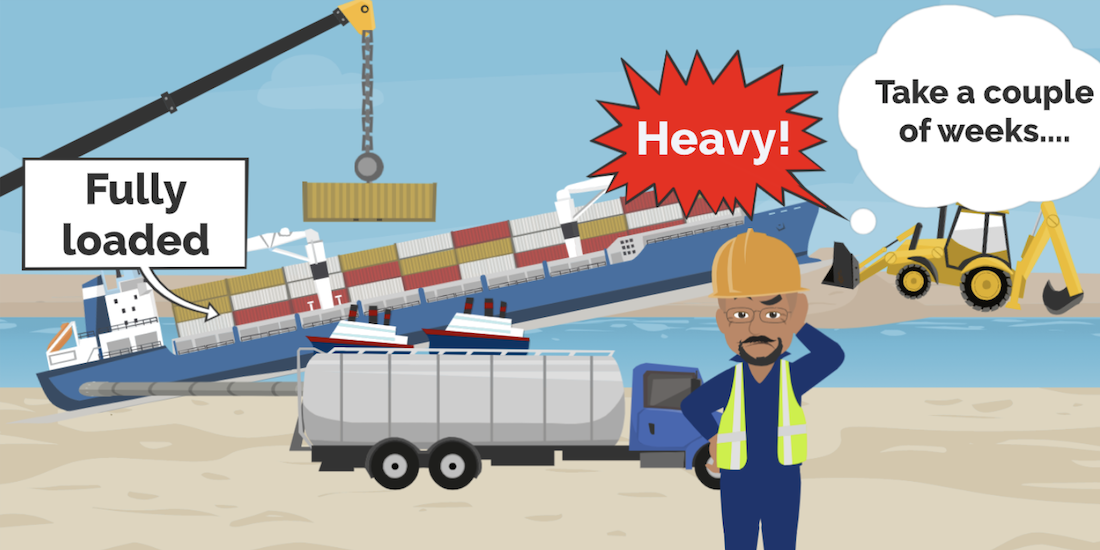 The grounded container ship is almost fully loaded. So, it is very heavy to move.

If the current salvage plan does not work, they will need to unload containers, and empty the fuel to reduce weight.

But, it is said, if these measures are taken, it will take a couple of weeks to move the ship.

What happens if Suez Canal cannot use 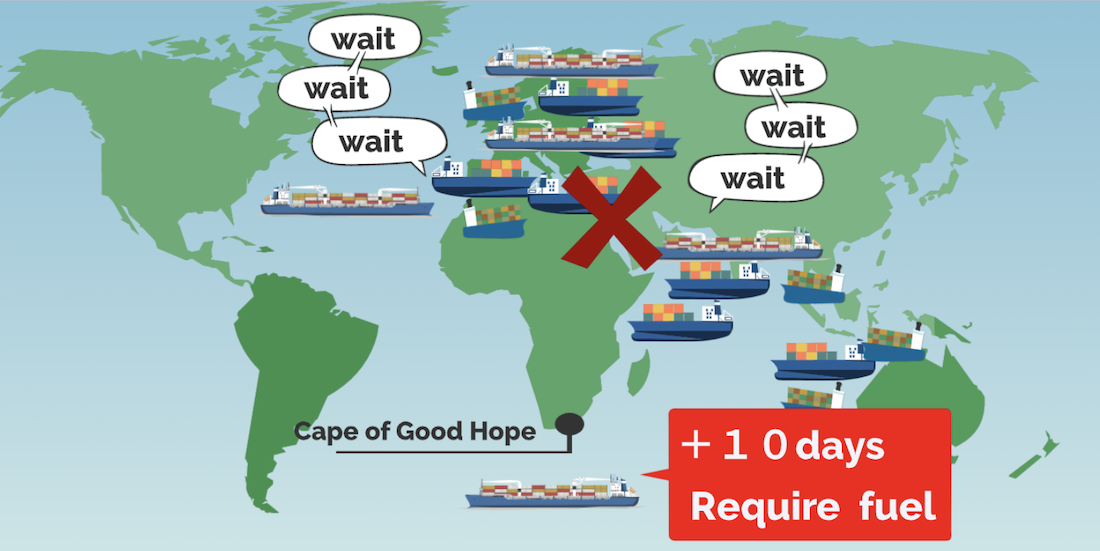 If we are unable to use the Suez Canal, vessels will need to re-routed around the Cape of Good Hope in South Africa.

This will take additional 10 or more days, and will require high volumes of fuel. Therefore, at the moment, 300 vessels have chosen to wait near the canal. 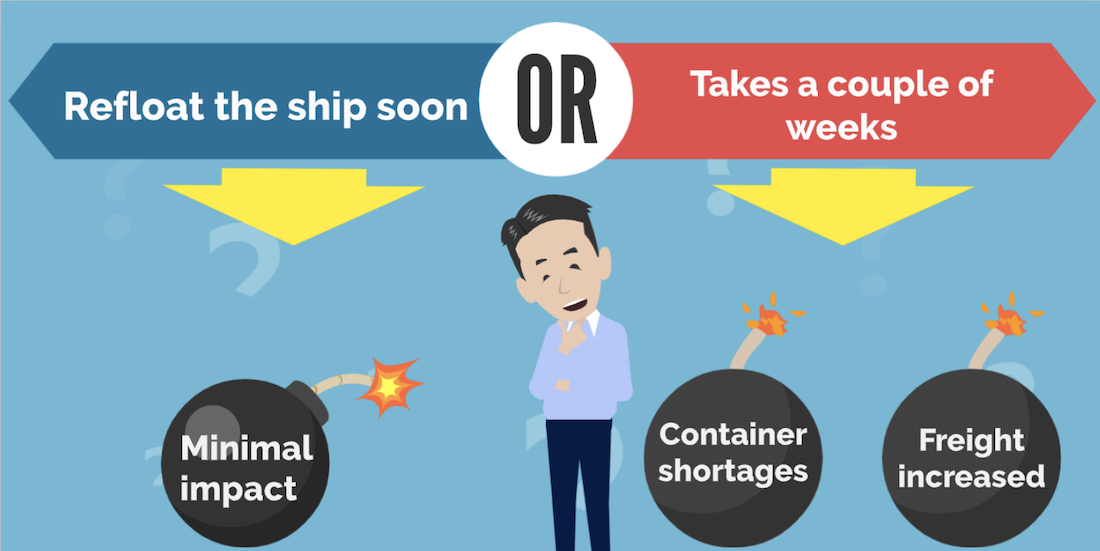 So, now you know the current situation. How will this problem impact us?

If they are able to refloat the ship soon, the impact will be minimal.

However, if it takes a couple of weeks to unload the containers, it will create an additional impact to the container shortages, and ocean freight will be increased.

As I previously explained, if they go around the Cape of Good Hope, it will take more than 10 days.

This additional 10 days impact is huge. It will take more time to transport containers, and will require extra fuel, resulting in shipping lines increasing prices to cover the costs. 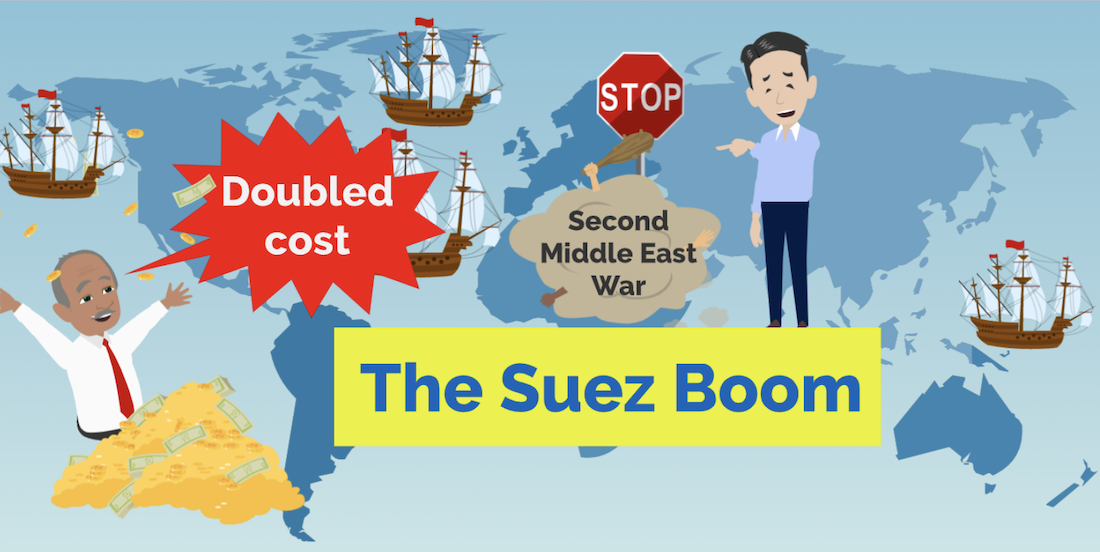 By the way, the Second Middle East War occurred in 1956, and the Suez Canal was closed for 1 year. At that time, vessels had to go around the Cape of Good Hope, and they had a shortage of vessels.

This was called “the Suez Boom”. 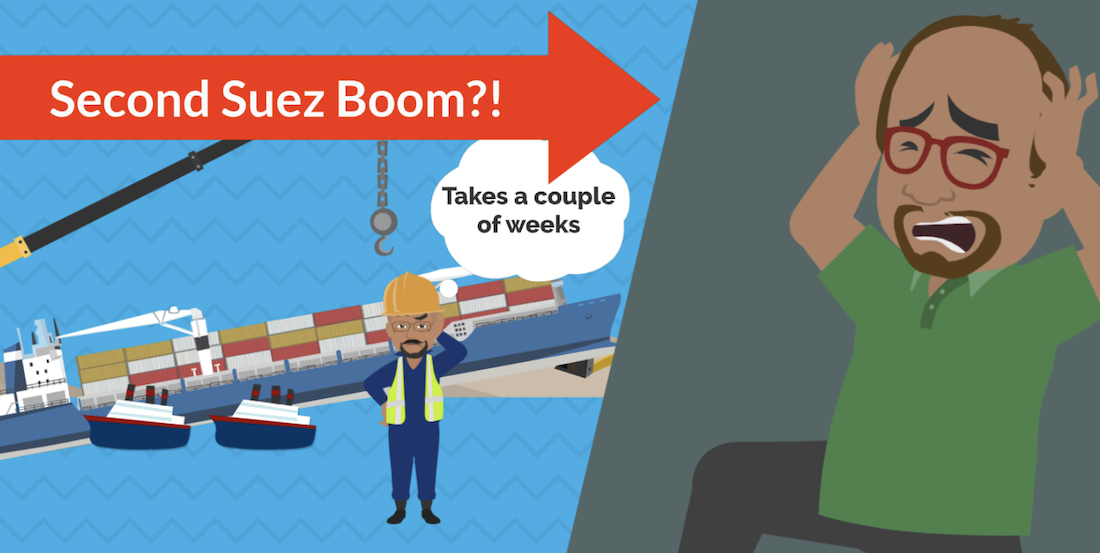 The current grounding will not continue for a year, but if salvation takes a couple of weeks, there may be another “Second Suez Boom”, which may affect the sea shipping industry.

This is no good for shippers, so let’s hope the issue will be solved very soon. 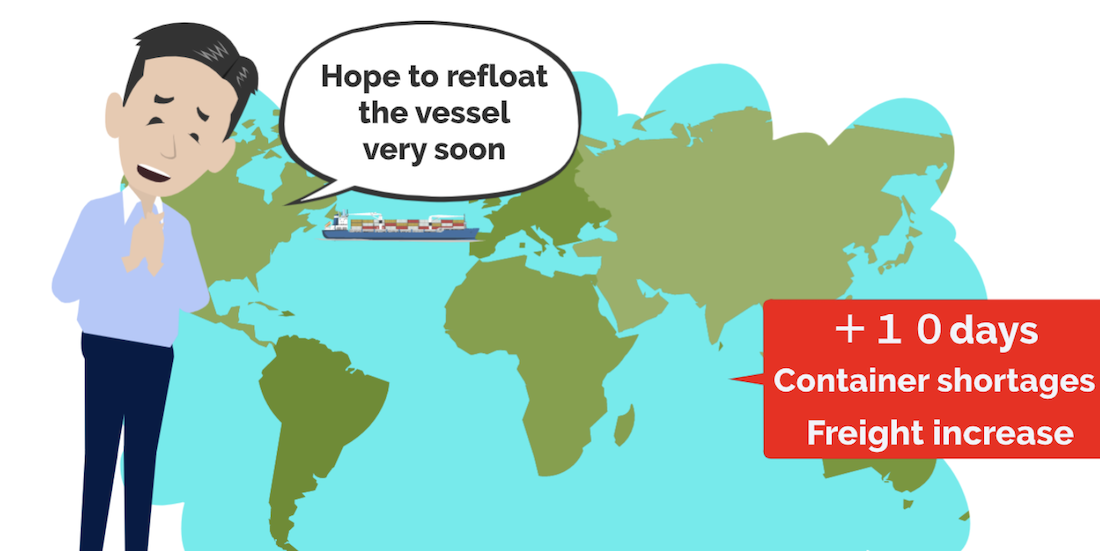 A large container ship with 20,000 TEU class, called Ever Given, owned by a company called Shoei Kisen got stuck in the Suez Canal, and blocked the route.

As of the 27th March, 300 vessels are waiting.The refloating process is not going well at the moment.

If they are unable to move the vessel, they will need to unload the full containers and empty the fuel to reduce weight. This process may take a couple of weeks, and during this period, we are unable to use the Suez Canal.

If so, vessels will need to go around the Cape of Good Hope in South Africa, which could take additional 10 or more days. This will cause a negative impact on the current container shortages. Ocean freight will temporarily increase.

I hope that they are able to refloat the vessel very soon. That’s all for today. Thank you.