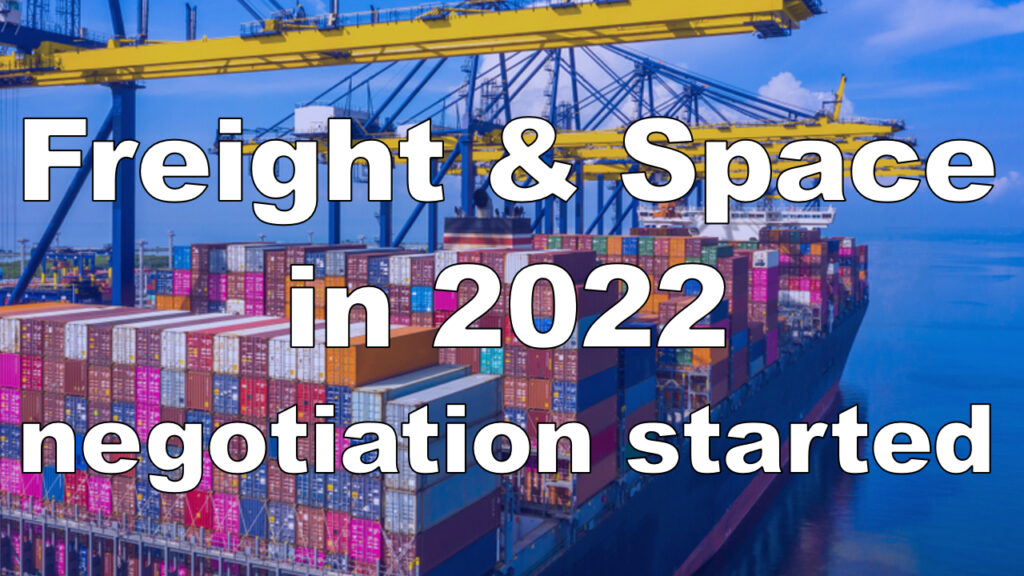 Hello, it’s IINO.
I would like to broadcast IINO san’s Logistics Radio today.

Today’s theme is about that the negotiation for ocean freight and space for the following year has started.

Normally, negotiations with shipping companies for space and freight rates for the following year in ocean transportation start in November or December.

However, it started in September this year, it is an unusually early start.

This is probably because there was a huge confusion of supply chain this year and it is expected to be the same next year as well.

Why contract negotiations are so fast

Mainly in contracts, major shippers and forwarders tell shipping companies how much booking volume they have for next year, and then negotiate ocean freight rates and space.

In 2022, it seems that space negotiations are taking precedence over ocean freight rates.

The current congestion of containers in ports and inland areas around the world is not going to be resolved any time soon.

In addition, in July 2022, the North American West Coast collective agreement will expire and renegotiations will begin.

It is very likely that space will continue to be tight for ocean shipments to North America next year as well.

I will explain the different types of ocean freight rates in negotiations with shipping companies. There are two types of these, one is Named Account and the other is FAK rate.

On the other hand, FAK Rate stands for Fright All Kinds, and can be understood as a fixed rate for one to three months.

With the current state of affairs, it is not only difficult to fix the rate for three months, but FAK Rate itself may not be available in some cases.

If FAK Rate is not available or shippers who do not have Named Account, special rate named Premium Rate will be charged.

It is that if you pay even more than the normal ocean freight charges, you will get the space.

If we are able to use Premium Rate only, we will have to pay expensive freight cost in order to ensure a stable supply chain, so we make a firm contract the year before.

Possibility of oversupply after 2023

And it seems that some shippers have unexpectedly proposed “multi-year contracts” in this contract.

Currently, shipping companies are ordering a lot of containerships due to the recent economic boom.

As you can see, there is a possibility of oversupply after 2023, so multi-year contracts may be disadvantage for shippers.

However, I personally don’t think there will be an oversupply to that extent.

Lessons Learned from the Suez Boom

There was a time called Suez Boom around 1956, when was the biggest economic boom for shipping companies.

Suez Boom is that the Second Middle East War broke out over the ownership of the Suez Canal, and the Suez Canal was closed for a year.

Because of it, many ships were forced to go around the Cape of Good Hope in South Africa, which caused ocean freight rates to soar.

Shipping companies, which profited greatly from soaring ocean freight rates, invested in new ships. But when the Suez Canal reopened, there was an oversupply and the major recession has hit the shipping market.

There are concerns about such oversupply this time as well, but I personally believe that shipping companies, who learned from their past mistakes, would control the amount of supply to use shipping capacity responded to environmental protection.

Nevertheless, it seems that ocean freight rates are expected to remain high in 2022 and negotiations are underway including major shippers and forwarders.

So, it is expected disruptions in the supply chain next year.

I personally have to prepare for a continuous busy year next year as well.