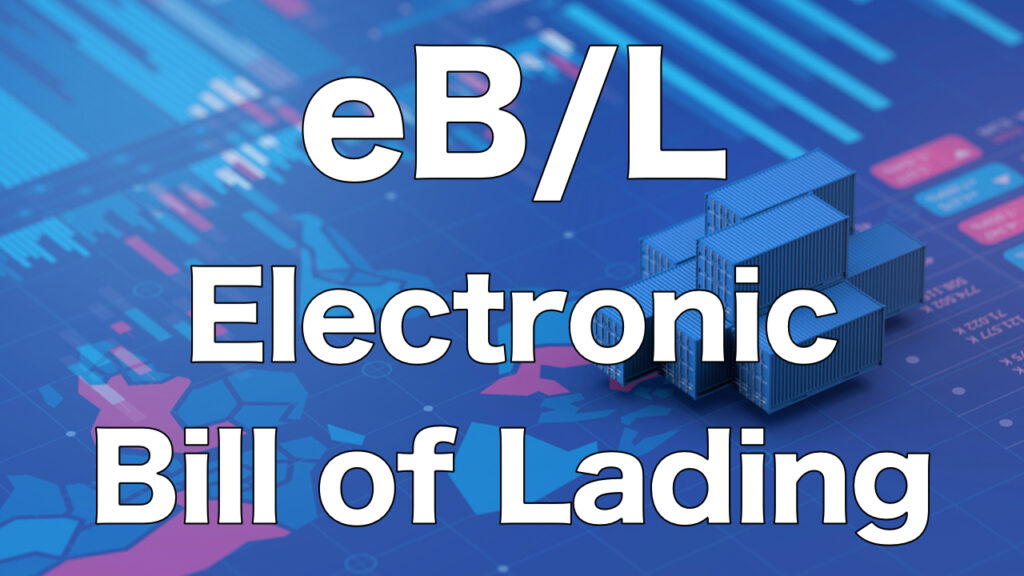 Hello, it’s IINO.
I would like to broadcast IINO san’s Logistics Radio.

In the middle of September, there was news that Hapag Lloyd, German shipping company, will start offering eB/L.

B/L has been paper-based for a long time, but now they are going electronic, so I looked into eB/L.

The process of digitizing B/L

eB/L uses blockchain technology to digitize data which cannot be rewritten, whose concept itself has been around since the 1990s.

However, it took so long to be introduced that it was not until September 2021 that shipping companies officially launched it.

Introduction of eAWB for Air Transportation

On the other hand, the introduction of electronic Air Waybill, eAWB, for air transportation was started by IATA in 2010. And its operation has become quite popular among airports, airlines, and forwarders around the world.

In the case of air cargo, the transportation time is much shorter than that of ships, so digitization was important for speedy delivery.

It could be one reason that Air Waybill in air freight is positioned waybill as the name suggests not securities, that’s why became popular quick.

The reason why it took so long to introduce eB/L

So why did it take so long to introduce electric bill of lading for ocean transport?

First of all, I think the reason is that there was no technology called blockchain and the original documents were considered important as securities.

The speed of ships has increased, and in some cases, the cargo can arrive in 2-3 days after the ship leaves the port. However, we have been dealing with this by using surrender B/L and Sea Waybill.

Nevertheless, with paper-based B/L, there has always been the risk of loss and delay in issuance.

As mentioned above, B/L is securities. For example, B/L issued for a container containing 1 million USD worth of cargo is a document needed to pick up the container at a port in another country.

In that sense, B/L is worth 1 million USD. If B/L is lost and falls into the hands of a third party, you can understand that it would be a big problem.

The Problem of Delayed in issuing B/L

Delay in issuing B/L does not only be able to pick up cargo on schedule, but also affects the issuance of certificates of origin.

Certificate of origin cannot be issued without B/L. You will not be able to receive preferential tariff treatment without it, which affects the price competitiveness of your products.

The process of B/L digitization by Corona

However, the global spread of Corona virus has put the spotlight on the digitization of B/L.

This is because it occurred that B/L is issued in paper form, but due to the corona infection, even though ships had left port, B/L has not been issued.

B/L is issued by a person, so, if the person in charge of B/L or the shipping company is infected by Corona, paper-based documents cannot be issued.

Regulation and response of related companies

As you can see, the transition from paper B/L to eB/L has begun. However, for taking place in earnest, it needs improvement of laws and regulations and action from companies involved.

In Japan, the Council for the Promotion of Regulatory Reform of the Cabinet Office issued a report on June 1st, 2021, on the digitization of bills of lading. I believe that the development of laws and regulations will continue to progress in the future and sure other countries as well.

If it becomes regular to issue eB/L, banks and insurance companies will have to adapt accordingly. Banks, in particular, used to buy the original B/L and issue L/C.

As eB/L becomes more common in the future, how they will issue L/C, perhaps new forms of L/C can be created.

I personally think that the shipping industry will undergo major changes in the 2020s. The current global theme of decarbonization, digitization mentioned this time and automation of ports are also major themes.

I will continue to update you with information on eB/L and other topics.