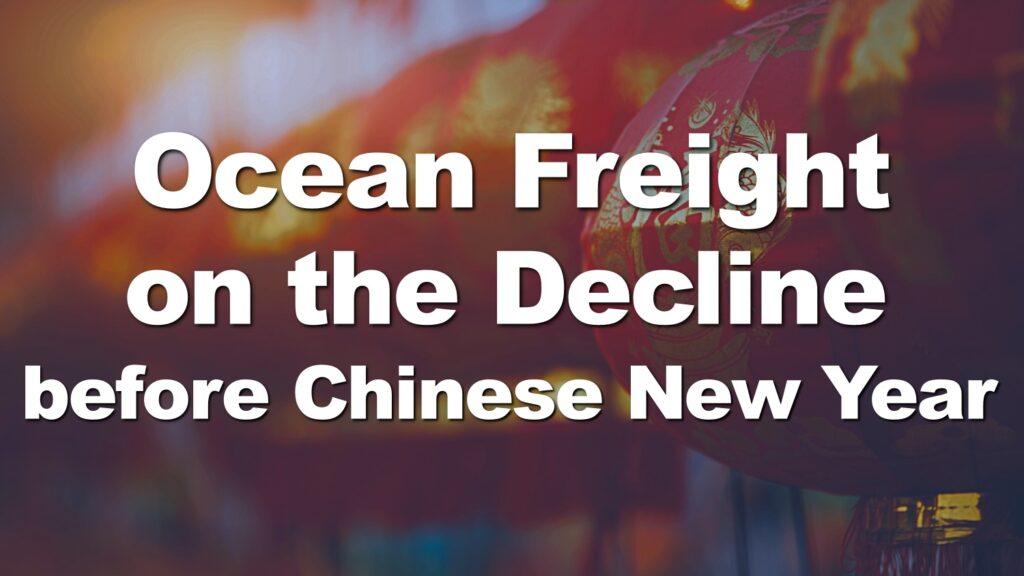 Today, I would like to talk about, “Container Freight Rates Stall Before Chinese New Year; Prices Fall for North America.”

Ocean Freight on the Decline

Yesterday I explained the situation at various ports in China before the Chinese New Year, and today I will explain about freight rates.

Ahead of the Chinese New Year, container freight rates, which had been on an upward trend, are now at a standstill.

From Shanghai to North America

Container freight rates from Shanghai to the West Coast of North America as of January 21 were USD7,976 per 40-foot container, down USD18 from the previous week.

This is the first time since mid-October 2021 that freight rates have fallen, albeit slightly.

Its of 40-foot container from Shanghai to the East Coast of North America was USD11,337, down about USD400 from the previous week.

This is the second consecutive week of price declines for East Coast North America.

The rate per 20-foot container from Shanghai to Northern Europe is USD7,783 and to the Mediterranean is USD7,522.

Although there has been some fluctuation since the end of December last year, the movements have been close to the same level.

In addition, rates to West Africa and South Africa were USD7,396 and USD6,278, respectively, both down slightly from the previous week.

There has also been an overall downward trend in rates here, but the amounts are slight and there is no sign of a sudden softening, according to the report.

The article concludes that in addition to the Chinese New Year vacations, the strict regulations implemented to prevent coronas in preparation for the Beijing Olympics may have contributed to the slowdown in shipments.

Congestion of Ports and Availability of Space on Ship

In yesterday’s radio, I reported that ports in Shenzhen, Ningbo, Shanghai are congested, and restriction for Return is placed to be more than 3-4 days before the ship’s berthing date.

The Shanghai Shipping Exchange index does not reflect this.

Port congestion due to ship delays and the availability of space on the ship may be another story.

Before last year’s National Day of China, there was a power shortage, so shipper cancelled at the last minute because they couldn’t finish production.

Therefore, freight rates plummeted as forwarders sold their space at a loss. The news will be updated again when the Chinese New Year comes.

This year, with the Chinese New Year, Corona, and the Beijing Olympics, there are a lot of events going on, and I don’t know how they will work, as this has never happened before.

I will keep you updated the information of China.