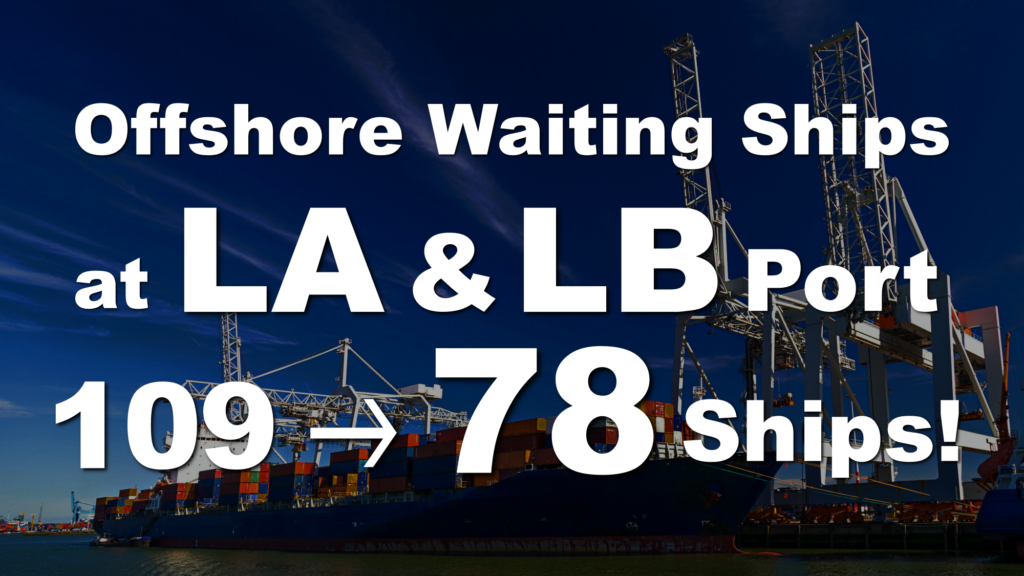 Today, I would like to talk about an article from the Wall Street Journal, “LA, LB Port Ship’s Offshore Waiting Improving.”

The current number of container ships inbound at the ports of LA and LB stood at 78 as of last Tuesday, down from a peak of 109 a month ago.

Port officials say, “it is unclear whether the decline before and after the December holidays is the beginning of a trend, or a temporary respite because of factory slowdowns in Asia for Chinese New Year holiday from Feb. 1st.”

The number of vessels waiting offshore is the least since November 11, but congestion is reported to be historically severe.

At the Port of LA, container ships are waiting an average of 18 days to unload. Before Corona, it was rare to have to wait for a ship to dock.

The CEO of Danish container shipping company, Maersk, said this week that he expects supply chain bottlenecks to persist through at least June.

But shipping industry officials point to a silver lining, as constraints on the movement of cargo are easing.

Omicron variant caused a spike in New Year’s absenteeism at the ports of LA and LB, but now more workers are returning to work.

Increased Containers out of Terminals

Containers are also being moved out of the ports faster.

At Yusen Terminals’ facility at the Port of Los Angeles, weekly throughput has increased by 55% in the past two weeks.

During Chinese New Year, the volume of arrivals at U.S. ports generally declines.

The article says, it is because that factories in Asia slash production and migrant workers return to their families for the vacation.

When Ship Backlog Will Be Cleared?

On the other hand, experts from Sea-Intelligence, a ship consulting firm based in Denmark, said, “based on previous ship backups, it could take eight or nine months to clear the ship backlog once operations were more efficient.”

Eight to nine months from now, it will be almost the end of the year. There is no clear sign of progress yet.

Too Early to Declare Resolve of Bottlenecks

A vice president at Sea Intelligence said, “At this point, we believe it is too early to say definitively that a significant bottleneck in the U.S. supply chain has been eliminated.”

The situation is getting better, but we don’t know yet.

However, at this stage, I don’t feel that the volume of offshore ships, and congestion of ports, and warehouses will increase further in the future, and prices may stabilize, albeit at a high level.

The Chinese New Year has not been over yet, but I will continue to keep you informed.