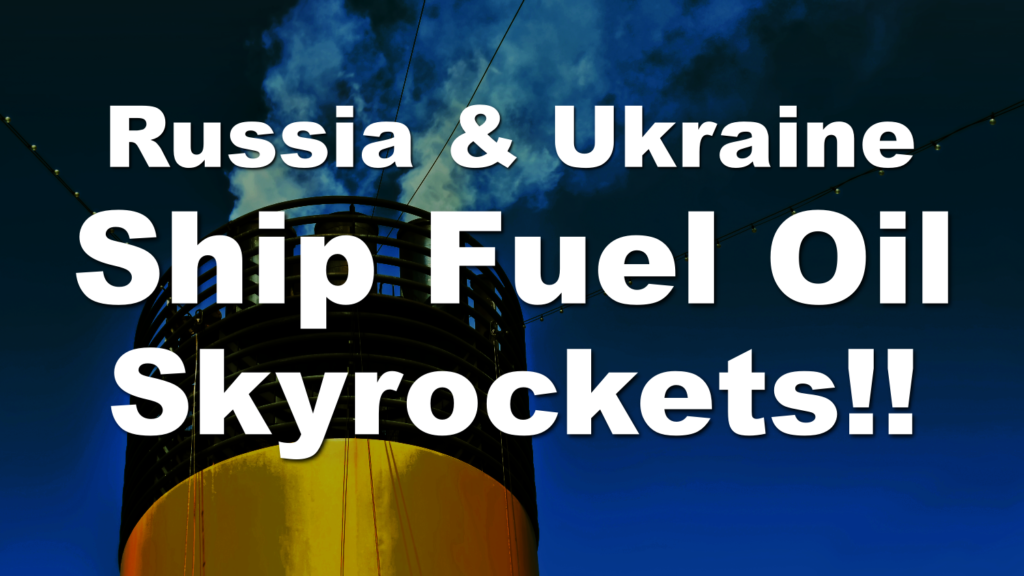 Today, I would like to talk about, “Ship Fuel Oil Price Surges to USD752, Approaches Record High on Tensions in Russia and Ukraine”.

The price of marine fuel oil has been rising sharply.

The price of VLSFO, Very Low Sulfur Fuel Oil, in the Singapore market on Feb. 14 hit USD752 per ton, up USD20 from the previous day.

This is approaching the all-time high recorded two years ago.

Uncertainty over energy supply and demand due to tensions in Ukraine is pushing up oil prices.

The price of low-sulfur fuel oil in Singapore has already increased by over USD130 compared to the beginning of this year.

It is approaching the all-time high of the high dollars 750s, which was recorded just after the start of SOx regulation in January 2020.

About A Fuel Oil

Therefore, SOx regulations require the use of heavy oil A, low sulfur heavy oil A.

Low sulfur heavy oil has a sulfur content of 0.5% and is less likely to produce PM2.5.

The low sulfur fuel oil I mentioned at the beginning of this article is like high-octane fuel oil, and its price has been rising.

Impact on the Management of Japanese Ships

The three Japanese shipping companies, NYK, MOL, and Kawasaki Kisen, have almost fixed the cost of bunker oil by the end of March.

And the impact on their earnings this fiscal year will be limited.

However, the article reports that if the price hike of bunker oil is prolonged, it may put pressure on their earnings in the next fiscal year and beyond.

Moreover, the yen is weak right now, and the Bank of Japan has decided to purchase unlimited amounts of 10-year JGBs at a yield of 0.25% in a “limit operation”.

It makes easy for the yen to weaken and the dollar to appreciate.

Therefore, I think it will affect the management of Japanese ships.

A and C Fuel Oil

The price of C fuel oil has also risen, up USD21 from the previous day to USD536 per ton.

Although C fuel oil is cheap, it is regulated and cannot be used as is.

In order to use C fuel oil, a scrubber, which is exhaust gas cleaning device, is required on the ship, which costs about USD870 thousand.

The average price difference last year was about USD120 per ton. The article said that scrubber-equipped ships that can use C fuel oil are becoming more competitive.

There are actually three types of heavy oil, which are explained in a simplified manner in this radio.

To explain briefly, both A and C fuel oil prices have risen, and in order to use the cheaper C fuel oil, scrubbers are required.

This means that shipping companies that use ships with scrubbers will have an advantage.

International Situation and Weakening of the Yen

If you are involved in trade or international logistics, I think it is good to watch the news from the perspective of the situation in Russia and Ukraine and the impact of the weak yen.