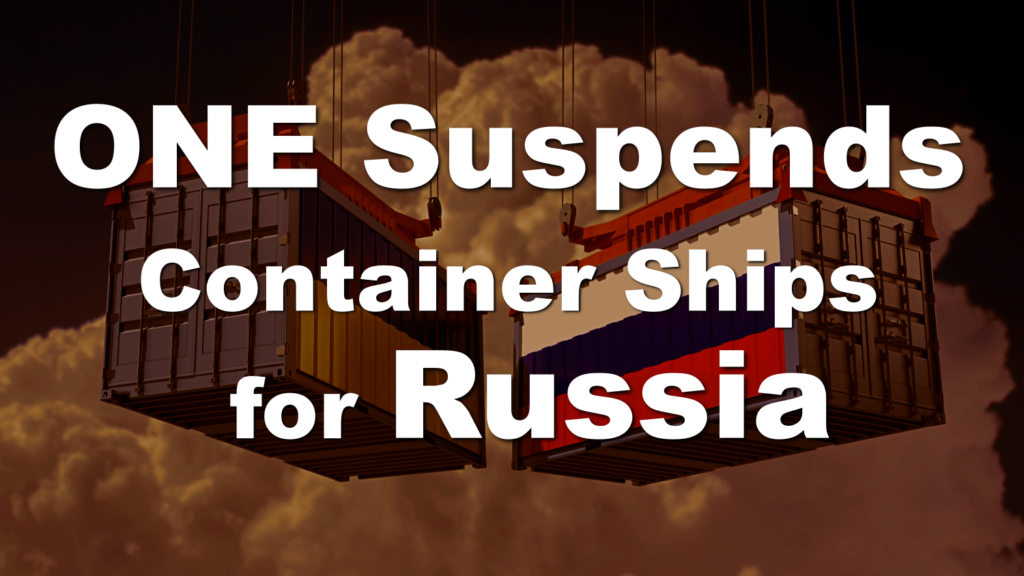 Today, I would like to talk about “the situation in Russia and Ukraine” by giving some articles.

ONE Suspended for Russia

The first article is about, “ONE suspends some shipments to Russia, while European shipping companies operate as usual.”

On February 25, Ocean Network Express (ONE) announced that it would stop booking container shipments to the port of St. Petersburg in Russia on the Baltic Sea side, in addition to Odessa port in Ukraine and Novorossiysk in Russia on the Black Sea coast.

This is because Russia’s military invasion of Ukraine will interfere with transportation to the region.

I believe that this was influenced by the fact that a Japanese bulker ship was hit by Russian artillery fire in the Black Sea on February 25.

In the past, there have been cases of damage to tankers during conflicts in the Middle East.

However, there has never been a case where multiple cargo ships were hit by military action in a short period of time.

This is a serious situation for Japanese Shipping Companies

The Black Sea has also been designated as an area for ship war insurance with a premium surcharge effective March 1st.

The area around the Black Sea has been “danger zone” for ship operations.

As of 3:00 PM, Japan time on the 28th, European shipping companies, such as Maersk and CMA-CGM, were providing services to Russia as usual.

However, according to the article, depending on the situation of sanctions against Russia by Japan, Europe and the United States, there is a possibility that the companies will move to suspend services to Russia.

The State of Russia’s Railways

The next article is about “Russian railroads operate normally with transit cargo. There are some restrictions to and from Ukraine”.

Some shipping companies have stopped accepting cargoes bound for Russia.

On the other hand, operators transporting cargoes on the Trans-Siberian Railway have announced that “rail services are operating as usual, including transit cargo transport through Russia” as of the 28th.

Russia’s largest freight railroad company, Transcontainer, says that “we provide transit transportation through the China-Mongolia border and the Belarus-Poland border as usual.”

However, it restricts cargo acceptance to and from Ukraine.

The Siberian Land Bridge, an international multimodal transport service from Asia to Europe, is currently operating as usual.

Due to the problem of insufficient space on container ships, cargo bound for Europe is transported using Russia’s Trans-Siberian Railway.

If rail is not available, there will be another major clog in the supply chain. Ocean freight rates to Europe will certainly go up.

Congestion Concerns at Hub Ports in the Middle East

Since the Black Sea region has become a danger zone, there is a possibility that containers will be held up at hub ports in the Middle East, such as Dubai, Jeddah, etc.

If the war is prolonged, it will lead to disruptions in the entire global supply chain.

I will continue to update you with market information as it becomes available.