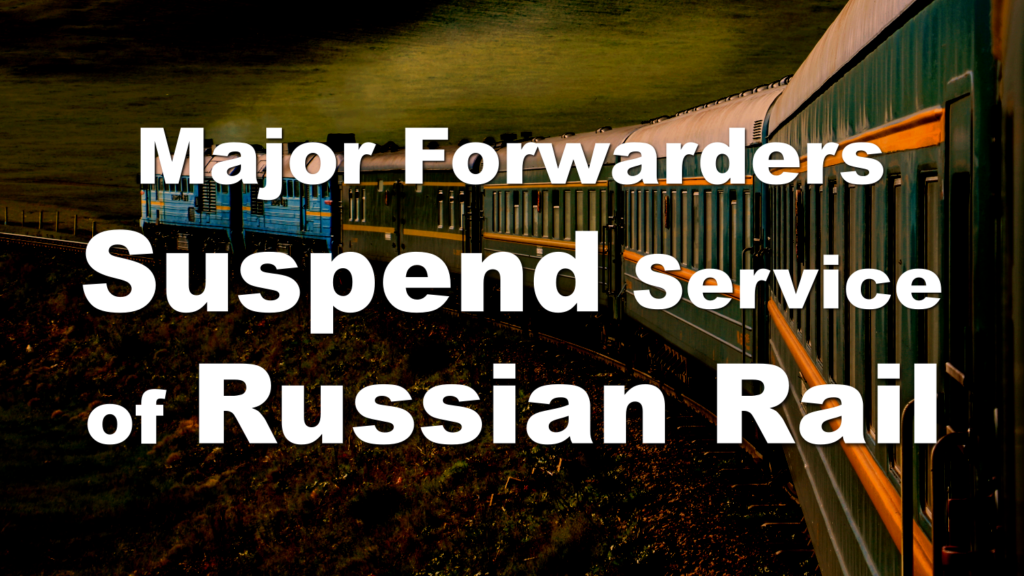 Today I would like to talk about, “To Russia, Major Forwarder Moves” from an article in the Wall Street Journal.

As I reported earlier that shipping companies have suspended their services to Russia, I would like to introduce an article from a major forwarder’s point of view.

First, among shipping lines, Maersk, MSC, and CMA CGM have suspended cargo services to and from Russia, except for foodstuffs, medical supplies, and humanitarian aid, effective March 1.

Then forwarders Kuehne + Nagel of Switzerland and DB Schenker of Germany announced in an advisory to their customers that they will stop deliveries to and from Russia by air, land, and sea.

DSV of Denmark and Geodis of France said they are also suspending deliveries to Belarus, a Russian ally.

DSV tells us that, “the decision to suspend shipments to Russia and Belarus will further disrupt the supply chain and add to the complexity of transportation.”

The company continued that, “However, it is a maximum effort to mitigate adverse effects.”

Soaring of Oil and Transportation Costs

The oil price spike has been reported in all media outlets. As for transportation costs, I reported in yesterday’s radio that air freight rates have more than doubled on a spot basis.

Diversions of ocean freight shipments to other ports “are already piling up at ports in Europe and elsewhere, possibly causing congestion and increasing freight rates on these routes,” Freightos said.

French forwarder Geodis has announced that it will also stop booking freight rail service between Asia and Europe.

Here are the points of interest mentioned in the article.

This overland service is one that has become increasingly popular in the past two years with Corona, as shippers and freight forwarders have shifted away from ocean freight to avoid port congestion caused by Corona.

According to Freightos, Online Freight Market Place, the equivalent of about 10,000 containers of cargo are shipped by rail from Asia to Europe each week.

Shift from Rail to Sea

The company said, “If concerns about sanctions and disruption cause a significant number of containers to shift from rail to sea, this new demand will also put upward pressure on freight rates between Asia and Europe as more shippers compete for capacity that is already in short supply.”

A satellite photo of a Trans-Siberian Railway station was published in the news on March 6, 2022.

Comparing photos taken before the invasion of Ukraine on Feb 2 and after it on Mar 1, the satellite photo analysis reported that the number of freight vehicles had decreased.

The report stated that there may have been an anomaly in logistics during this period.

As I reported yesterday, air cargo has already been affected, and the next point of interest is what will happen to transportation using the Trans-Siberian Railway.

This is the third time I have reported on this radio about the suspension of services by forwarders using the Trans-Siberian Railway.

As I mentioned at the beginning, Kuehne + Nagel and DB Schenker suspended overland deliveries to and from Russia, and by Geodis, bookings for Asia-Europe freight rail service.

European customs have decided not to let cargo to and from Russia through, and freight service on the Trans-Siberian Railway is effectively at a standstill.

This would mean a shift from rail to ocean transportation, which could have a strong impact on ocean freight rates.