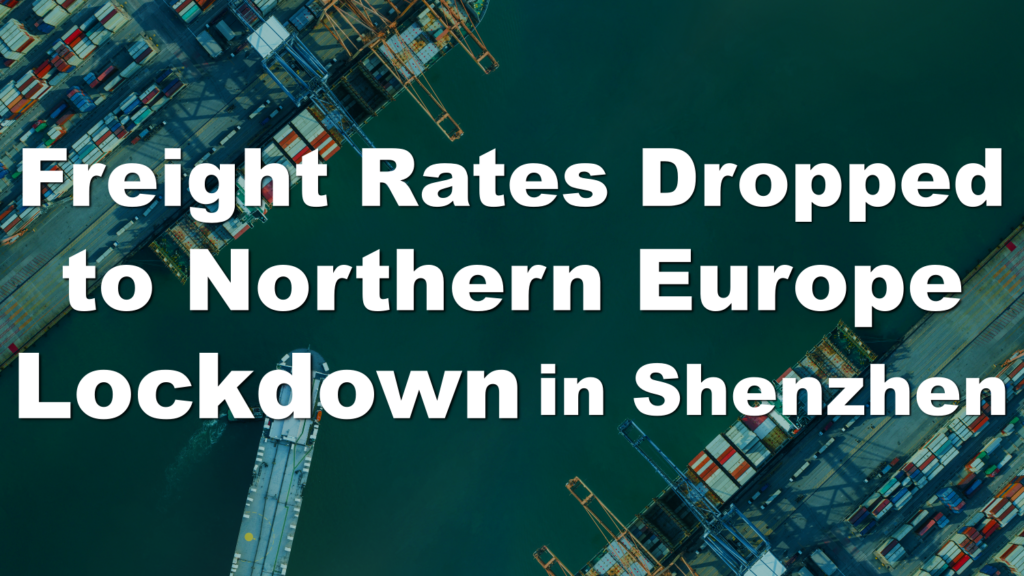 Today, I would like to talk about, “Container freight rates to Europe softened. Impact of Russia-Ukraine Issues?”

Container freight rates from Shanghai to Northern Europe for March 11, compiled by the Shanghai Shipping Exchange, were $7,019 per 20-foot container, down just under $700 from the previous week.

This is the seventh consecutive week that prices to Northern Europe have fallen, and this time the drop was quite large.

One possible cause is Russia’s military invasion of Ukraine.

Western countries have implemented economic sanctions, and in response, container shipping companies have simultaneously stopped accepting cargoes to and from Russia.

Therefore, this may have been affected to some extent by the halt of shipments of cargoes from Asia to Europe bound for Russia and Ukraine.

Rates to Northern Europe peaked at the end of January and gradually became cheaper, with the speed of decline quickening in March. Freight rates to the Mediterranean are also softening in line with the same trend.

A shipping company official said, “Bookings from Asia have become easier to obtain in the last week or so, compared to the past week.”

Impact of Blockade of the Trans-Siberian Railway

Containerized cargo volume from Asia to Europe in 2021 is approximately 17 million TEU. Of this total, cargo to Russia and Ukraine is 800,000 TEU, or about 5%.

In this radio, I reported that ocean freight rates may rise due to the effective blockade of the Trans-Siberian Railway.

However, at present, freight rates are softening because there is no more cargo to be transported to Russia and Ukraine.

While I am glad that rates are down and space is easier to get, I have mixed feelings because the war is still going on.

Whether rates will continue to drop remains to be seen.

Another article today reported a lockdown in Shenzhen, China from March 14 to 20.

The figure is 3,000 in mainland China, not just in Shenzhen, which shows the severity of China’s zero-corona policy.

During this period, factories will also be shut down in Shenzhen.

While it remains to be seen how far this will affect the situation, there are concerns about labor shortages in port logistics due to quarantine tightening.

It is also quite possible that the shortage of workers could cause delays in the vessel.

We are not sure what is going to happen anymore, and we are not at all sure what the future holds.

As of March 11, container freight rate to the West Coast of North America were priced at $8,105 per 40-foot container, down $5 from the previous week.

Prices to the East Coast of North America were $16,034, down $44, softening slightly but remaining essentially unchanged.

Offshore Waiting on the West Coast of North America

The number of offshore vessels was 50 as of March 11, a significant decrease from around 100 at the end and beginning of the year.

This is a considerable improvement, and if nothing goes wrong at this point, the offshore gap may disappear in another two months or so.

We feel that the logistics congestion in North America will be unclogged, and freight rates may settle down a bit until July.

I will update the information as needed.