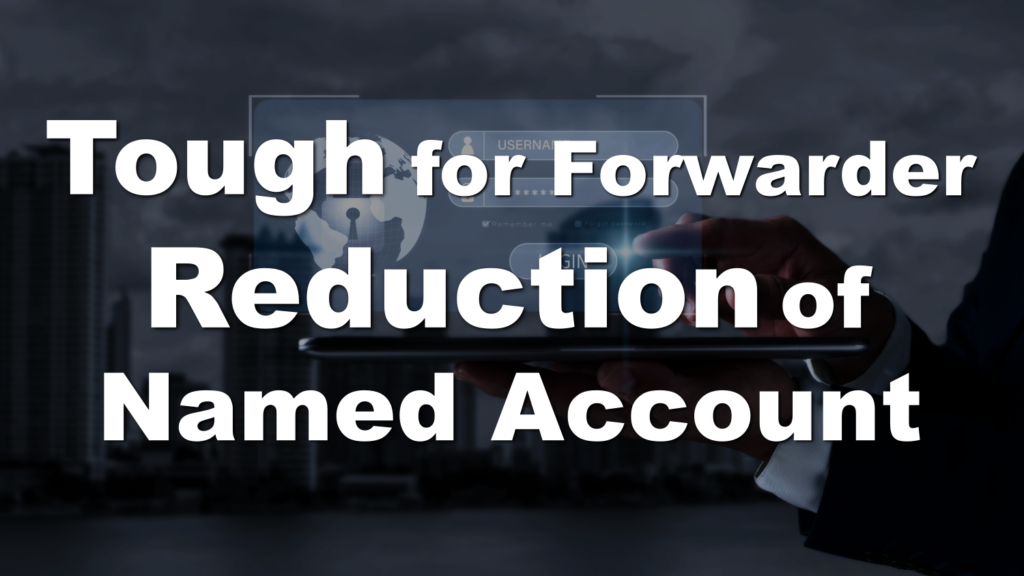 Today, I would like to talk about, “Container Freight Rate Negotiations with Forwarders, Named Accounts Shrink.”

Negotiations on container freight rates for 2022 in the Japanese market are in the final stages for actual shippers, and will now begin in earnest for forwarders.

Under the current circumstances, the shipping companies are more clearly focusing on actual shippers, and forwarders are becoming increasingly wary of the situation.

What used to be a way for forwarders to obtain discounted prices in the form of “how much is the freight rate for company A” will gradually disappear.

Furthermore, some shipping companies are consolidating their freight rates to forwarders into a single FAK, which is revised monthly.

Named Accounts are cheaper than FAK, and shipping companies can expect a certain volume of cargo and the convenience of being able to outsource detailed coordination with shippers to forwarders.

However, a shipping company official commented, “In the case of Named Accounts for North America, even though the forwarder is the original receiver, the shipping company actually arranges trucks and performs door-to-door delivery.”

“If that is the case, it is better for the shipping company to contract directly with the actual shipper.”

In the past, there was a sense that shipping lines dared to offer Named Account freight rates to forwarders to fill space on their vessels.

However, now, space is tight and there is no need to make an effort to fill space. Shipping companies do not have to offer Named Account freight rates and are moving to reduce them.

Last year, some shipping companies reduced the number of Named Accounts as well.

This year, several carriers have stopped offering Named Account fares to forwarders, especially on North American routes where space is in short supply.

However, FAK appears to be very strict for deliver to the railroad ramp not to warehouse, and free time on Tarif Street.

It is expected to be generally tougher for forwarders because they will have fewer options for freight purchasing.

This will make it easier for other forwarders to take them.

Some forwarders, on the contrary, see this as an opportunity to expand their business by leveraging their purchasing power and networks outside of the ocean.

I am not sure if there is a concept of “Named Account” in Thailand, but we have not received any Named Account and have been competing based on the monthly revised FAK rate.

This time it is mainly from Japan to North America, but my impression is that if this kind of thing spreads globally, it will become even easier to attack from a local standpoint like ours.

It is a tough situation for some forwarders who have Named Accounts.

As I mentioned yesterday, the situation from a forwarder’s standpoint is changing, including digitalization.

What I personally think is important is for forwarders to cooperate with each other and utilize each other’s strengths.

I think the timing is right for the industry to change, and large companies may be able to go their own way. However, small and medium-sized companies like ours especially need to cooperate with each other.