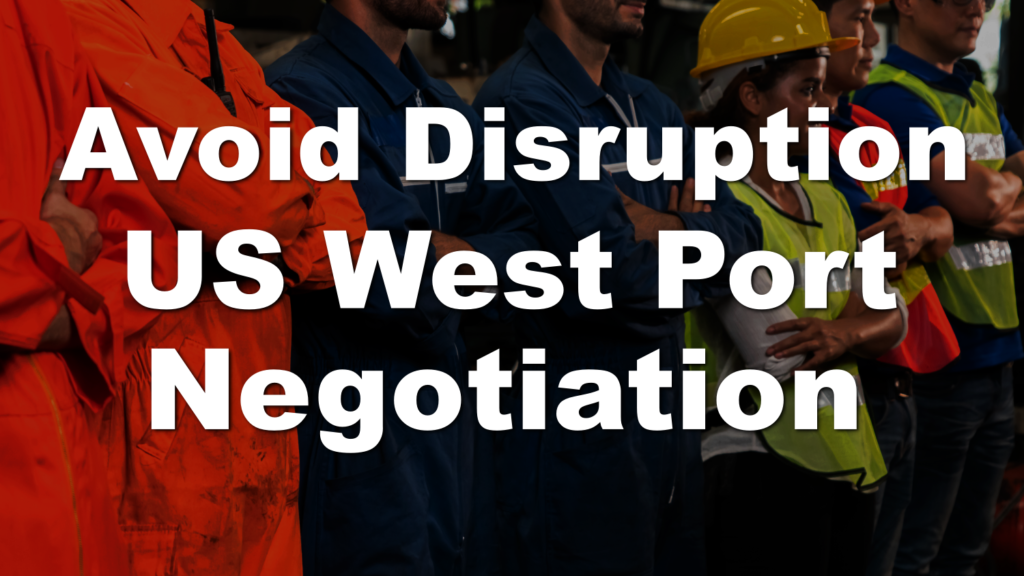 Today I would like to talk about an article from Wall Street Journal, “North American importers are restructuring their supply chains in preparation for a North American labor agreement in July”.

In July of this year, the labor agreement for the West Coast of North America will expire and renegotiations will begin.

In the meantime, there will be strikes by labors at ports on the West Coast of North America.

The previous strike in the 2014 negotiations was also quite prolonged, and there was a move to use the East Coast as the West Coast ports were unable to function.

Since there will be strike and the supply chain has not yet been unclogged, shippers are trying to prepare for the strike anyway.

Some shippers are trying to move up orders for this year’s holiday season and divert cargo from the West Coast to the East Coast and Gulf Coast.

Nevertheless, “many companies still prefer to receive cargo via the ports of LA and LB because of limited options,” said the president of third-party logistics company.

Labor Negotiation on the West Coast This Time

The West Coast labor negotiation covers 22,400 dockworkers in 29 ports from Washington State, where Seattle is located, to Southern California, where LA and LB ports are located.

This year’s negotiations will take place with dozens of vessels waiting offshore due to supply chain congestion.

In order to avoid congestion on the West Coast, there is a waiting list from the Port of Houston to the Port of Savannah, Georgia, and the Port of Charleston, South Carolina.

Negotiations will be conducted with offshore waiting occurring at each port in North America.

Personally, the union side of the negotiations has the advantage. I feel that they will proceed with, “If you want this situation to be resolved quickly, then give us what we want.”

The president of one logistics company stated that some shippers agreed to contracts earlier than usual in order to secure space.

It is the same feeling as in Japan, and anyway, they are space priority oriented.

He remarks, “Ports LA and LB handle nearly 40% of the U.S. container imports, and it would be difficult for other ports to handle much of the cargo from LA and LB.”

Major retailers understand that there is a limit to the capacity they can secure on the East Coast and that if they slow down too much, space for the East Coast may be filled.

Smaller importers can’t get long-term contracts and can only make last-minute bookings.

Even though they have a contingency plan, they will have to wait and see how much disruption there will be.

Increase in Container Handling Volume on the East Coast

Now, there is a change in the volume handled on the East Coast.

In recent months, container volumes through East Coast ports have increased more rapidly than those through the West Coast.

It is not yet clear whether this is simply due to congestion at the ports of LA and LB, which has resulted in lower cargo volumes being diverted to East Coast ports.

The talks will cover a wide range of issues, including work rules, automation, and benefits on the West Coast.

PMA said it was ready to begin negotiations immediately on March 16, while ILWU said it would not be ready until May.

For ILWU, there is no reason to do this immediately, as the more disorganized the market is, the more favorable the negotiations will be.

The vice president of supply chain for the Retail Federation said, “Many shippers don’t expect negotiations to be finalized before the end of June, when their contracts expire.”

“However, are ILWU and PMA also doing everything in their power to prevent further disruption? It does not appear that way at all,” he stated.

The situation is so favorable to the union side that automation of the port, the subject of this issue, may not pass.

Negotiations are likely to take much longer. I will update you as soon as we have more information.