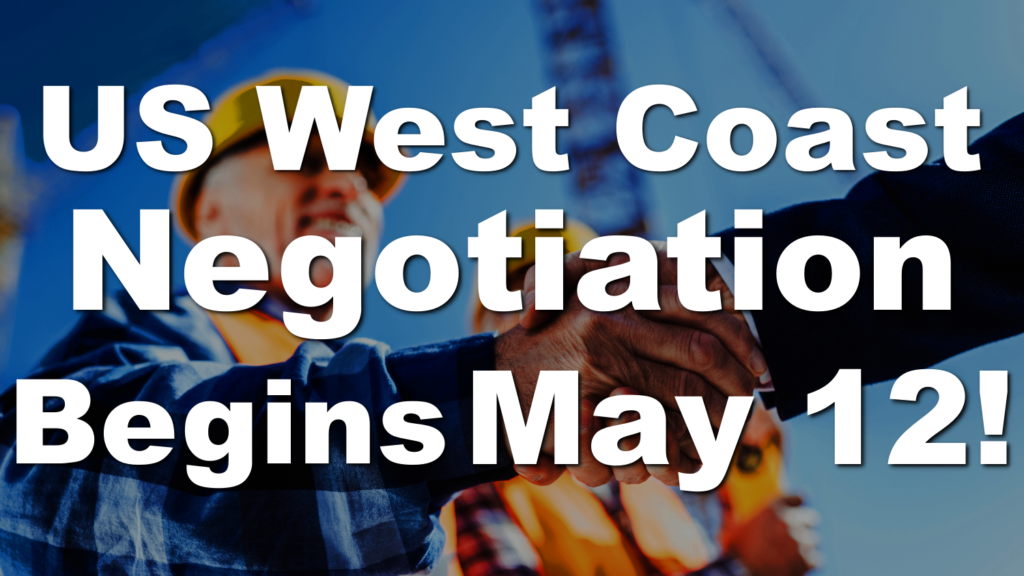 Today I would like to talk about, “North American West Coast Contract Negotiations to Begin May 12” from Joc.com news.

Negotiation for Labor Agreement will Begin

On July 1 of this year, the contract for West Coast dockworkers will expire.

The negotiation between the labor organization, ILWU, and the port employers’ association, PMA will begin on May 12.

Negotiations are about to begin in an environment where the transportation supply chain is already under stress and cannot tolerate further disruption.

Shippers are concerned that these negotiations will create further disruption in the marketplace because it will be in a position they cannot afford.

Some shippers have already begun shifting shipments to the East Coast and Gulf Coast to avoid the delays that are quite likely to occur.

The capital city of Washington is also being watched more closely than it has in years, the article reports.

On February 24, the National Retail Federation asked PMA and ILWU to begin bargaining earlier this year than in previous years.

However, this start date of May 12 is not particularly early, in the past, the negotiations have generally started in April or May.

The U.S. Secretary of Labor, in a speech at an American Association of Ports and Harbors, AAPA event, urged stakeholders and interested observers to remain calm.

He stated that the last time negotiations were quite protracted in 2014, but that does not mean that its of 2022 will be quite as bad.

Nevertheless, officials believe that the negotiations may be more problematic than they actually are this time around.

Automation is likely to be a key issue in these negotiations.

Neither ILWU nor PMA has said publicly what issues are important in this year’s negotiations.

In recent years, however, labor unions have openly opposed the spread of automation on the West Coast.

Unemployment in the Past

In 2002, there was a negotiation the computerization of documents, which resulted in the loss of employment for some ship’s clerks.

Also, in 2008, the unions lost the jobs of thousands of general dockworkers when an agreement was reached to automate cargo handling machinery.

Electronic and mechanization have resulted in the loss of jobs to date.

On the other hand, PMA point out that some West Coast terminals will have to automate in order to continue handling record cargo volumes each year at ports that cannot expand.

Automation would nearly double the amount of cargo that could be handled on the same site area, they said.

Claims of ILWU and PMA

ILWU, labor union side, is expected to seek contractual assurances that new jobs created by automation will be under the jurisdiction of ILWU.

ILWU may also ask PMA, employers’ association, for a “give-back” to make it easier to block future automation projects.

On the other hand, PMA points out that labor union has secured significant increases in pensions and benefits by agreeing to automation clauses in previous contracts.

In other words, the unions have agreed and are already getting benefits.

Average annual salary for dockworkers in 2021:

Because they are earning this level of annual income, workers do not want to lose their jobs to automation. Negotiations may be protracted in order to secure this annual salary.

Since negotiations will begin on May 12, the pace of port work will slow down in May or so, and there is a possibility that offshore waiting will increase again.

Negotiations will start in a little over a month.

There is a high possibility that the market will be disrupted, so we would appreciate it if you could prepare as much as possible.