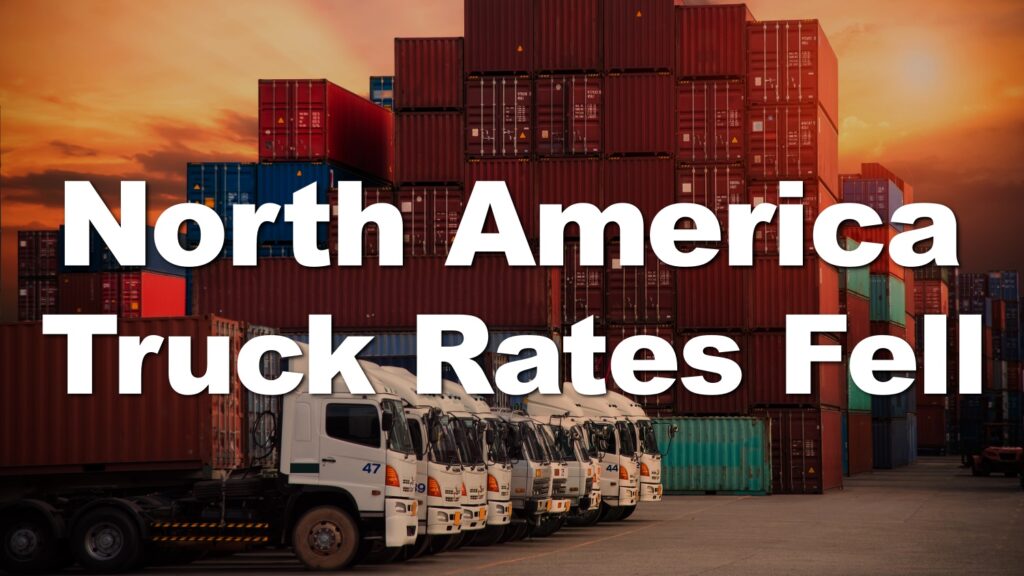 Today, I would like to talk about “Decreased demand for trucking, due to sluggish demand for freight transportation”.

Decline in Demand for Trucks in North America

Spot freight rates for trucking are falling and market analysts are lowering their valuations.

There was a slowdown in growth in the index of domestic transportation demand in March, up 0.6% from the previous month.

At the same time, freight rates are being lowered from recent historically high levels.

Freight rates are coming down as the volume of transportation demand and truckload capacity are becoming more balanced.

Excluding fuel surcharges, truck spot freight rates have fallen 37% since December, according to analysts at Bank of America Corp.

In the past month, they are down 27%, and have dropped considerably more recently.

Freight Rates Have Passed Their Peak

A trucking analyst stated that, “It is safe to say that the days when we can expect higher freight rates are over.”

U.S. broker representative also stated that, “Shippers who currently have expensive contracts due to lack of capacity in transportation are also breaking those contracts in search of lower rates as the market changes.”

There are, in fact, lower freight rates out there.

According to him, while there is still high demand for transportation from large trucking companies, “I don’t think we’re going to see the same kind of boost that we’ve seen in the last couple of years.”

The peak in freight rates seems to have passed.

One LCL carrier stated that the consumer trade, which makes up the bulk of trucking, is shrinking due to inflation.

Inflation is currently quite high in North America. CPI, Consumer Price Index, rose 8.5% year on year in March, which is quite high, while price increases of about 2% are considered ideal.

The core index, which excludes the more volatile energy and food items, rose 6.5% year on year, while month-over-month CPI rose 1.2% and the core index rose 0.3%.

Rise in Energy due to the Situation in Ukraine

Energy and food prices have risen considerably in North America.

In food products, demand for eggs is increasing ahead of the Easter festival on April 17, and the avian flu outbreak has been confirmed in various states, causing egg product prices to rise.

Transportation analysts note that headwinds from inflation and the impact of the Russian-Ukrainian war pose challenges at the end of a strong growth period, the article concludes.

In addition, the invasion of Ukraine caused energy prices to soar, which raised prices in North America considerably.

If gasoline, electricity, and food prices rise, I suspect that people will be more reluctant to buy. In fact, there was a slowdown in the growth of the core index, which may suppress demand a bit.

The Fed will raise interest rates seven times this year.

The rate hikes will have a lot to do with it, but if the cost of living rises, as it is now, and people are reluctant to buy houses and cars that they purchase with loans, and demand falls, cargo movements will also fall.

Then, the logistics bottleneck will begin to dissipate.

As for Japan, if inflation in the U.S. settles down and interest rate hikes are small, the yen may not be significantly weakened.

As it is, imports are becoming more and more expensive in Japan due to the weak yen, making life as well as the economy more difficult.

Prices are rising due to the high cost of raw materials while salaries are not rising, which is called “stagflation.”

The economy is connected in many ways, and I will continue to keep you informed.