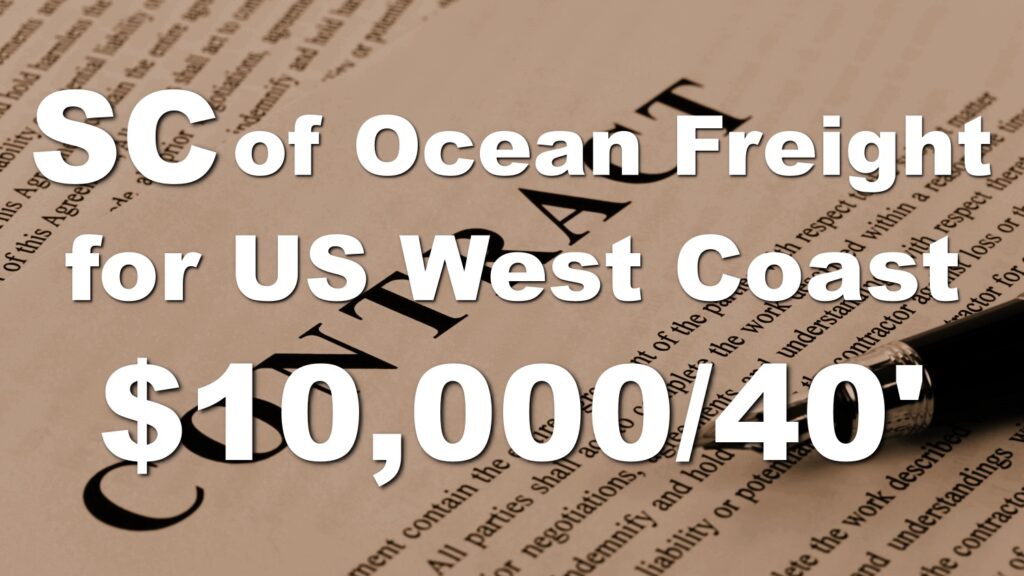 Today, I would like to talk about, “Negotiations on Service Contract freight rates to North America have been settled at more than double the previous year’s levels.”

Daily Logistics Radio by IINO san in 9th May 2022

SC for North America with Shippers

Negotiations on freight rates for the 2022 service contract for the Japan-North America route are almost complete.

The contracted freight rates negotiated by major container carriers and Japanese actual shippers, BCO, including forwarders appear to be around $10,000 per 40-foot container to the West Coast of North America.

Therefore, this year, FY2022 is 2-3 times higher than the previous year.

Increased Use of Spot Freight Rates in 2021

This is because in FY2021, a number of shippers were unable to ship at service contract’s freight rates due to schedule disruptions caused by port congestion and a string of flight cancellations.

This resulted in a sharp increase in the use of spot freight rates.

As vessels were stuck in the West Coast of North America, they were unable to return.

Furthermore, because Japanese freight rates were low, they were outbid by China, and vessels were not calling at Japan.

Therefore, this year, shippers are demanding contracts that allow for more reliable shipments, and the contracted freight rates are at record levels.

The article said that freight rates in Japan were generally at this level or slightly higher than in China. I think there will be less buying and losing this year.

Note that these fares include peak season and BAF, fuel surcharge, for both West Coast and East Coast destinations.

The peak season for North American destinations has been only during the summer months of July-September, but supply chain disruptions have resulted in the chronic application of peak season fares.

The approximately $10,000 for the West Coast of North America, which was decided on in the service contract, is about the same price as spot fares.

The article states, “Shippers are very eager to have a contract that ensures they can get space even if supply and demand are tight in FY2022. It appears that both sides have agreed on detailed arrangements for handling flight cancellations and other matters.”

SC for North America with Forwarders

In negotiations for forwarders, there was a clear increase in the number of shipping companies that do not offer named account freight rates on behalf of specific shippers.

There was also a move to consolidate rates to forwarders to monthly revised rates, called FAK rates.

However, some carriers continue to offer named freight rates to forwarders on an annual basis.

This also confirms the overall increase in freight rates this year.

Since service contract fares are about $10,000 to the West Coast of North America, what will spot rates be this year?

There have been some articles suggesting that freight rates will soften later this year, but not basically below the service contract.

If freight rates soften, I think it means that they will stabilize at a higher level.

For small and medium forwarders like us, spot rates are quite important.

I will update you with another information from the practical side to see if the freight rates will be even higher than last year because of the confirmed bottoming out of freight rates, or if we will not be able to get space at all.