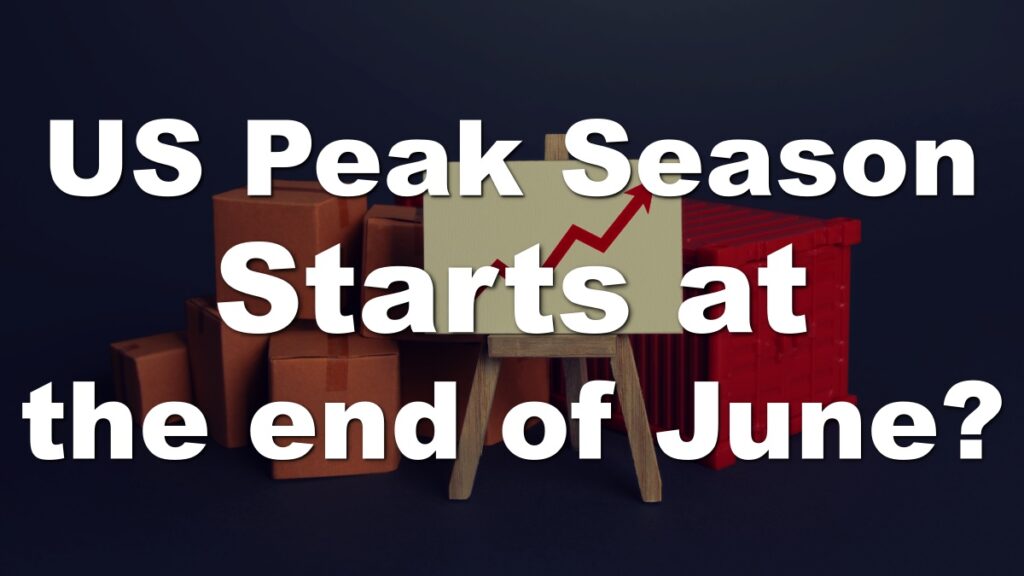 Today I would like to talk about “Preparing for an Earlier Peak in Shipping at U.S. Ports”.

Daily Logistics Radio by IINO san in 26th May 2022

North America is about to experience a seasonal import rush ahead of the fall and year-end vacations.

As importers try to avoid the risk of delays, this year’s peak season is expected to begin a few weeks earlier than usual, at the end of June.

Normally, the peak season is from July through September.

Last year, there was a major container ship offshore and goods did not arrive.

This year, the article reports, the arrival of goods will be a big gamble in an economy that is unstable due to inflation and other factors.

The shipping backlog that has been at the heart of congestion in the U.S. supply chain is dissipating in some places.

However, it has reappeared at East Coast ports and elsewhere, and other problems that have spilled over into the logistics network remain intact.

Warehouses are now full, trucking and railroad companies are short of employees and equipment.

And the container yards at the ports are crammed with hundreds of thousands of empty containers.

There are still problems with trucks and warehouses as well as ports.

Responding to Congestion on the West Coast of North America

However, U.S. port officials say that after more than a year of dealing with clogged docks, ships waiting offshore, and record import volumes, they are ready to handle the coming import surge.

Port officials say they have revised their operations to better handle congestion before it gets out of hand.

They have extended operating hours to handle more containers and have set up pop-up container yards to store overflowing containers.

Nevertheless, importers are wary and bracing for more delays.

About This Year’s Peak Season

In a survey conducted by the company Container x Change, three-quarters of shipping industry experts said that this year’s peak season will be as bad as or worse than last year’s.

Executives at retail giant Target said on a recent earnings call that they expect freight rates to be $1 billion higher than expected this year due to higher fuel and shipping costs, and that supply chain pressures will not abate until after 2023.

Some Say Demand is Softening

However, there are also signs of a softening in transportation demand.

Retailers such as Target and Wal-Mart are holding back on some orders as consumer spending shifts from goods to services.

Analysts at JP Morgan said in a recent report that they expect slower replenishment, especially in areas where demand has slowed, such as home furnishings and electronics, and a slowdown in imports could give port congestion some breathing room.

Container shipping company ONE recently increased its onboard space allocation by 15%, suggesting that there is room on board.

Perhaps because of this, a vice president of a major North American forwarder said, “We don’t see a big peak season.”

These views are part of the picture, and not everyone sees the situation as serious.

Nevertheless, on an actual basis, first-quarter imports at major U.S. ports were up 6.6% year over year, marking the start of a record year.

And now, despite the Shanghai lockdown, which has led to lower production and lower imports at China’s largest manufacturing hub, dozens of container vessels are currently waiting to unload at ports on the West Coast, Gulf Coast, and East Coast.

Some research firms estimate that the equivalent of 26 container ships’ worth of goods were not shipped from China in April alone.

The current offshore waiting in LA and LB ports dropped to 28 vessels this past Monday, a considerable improvement from January’s all-time high of 109 vessels.

The small-scale offshore waiting is spreading to other ports as U.S. shippers look for ways to avoid LA and LB congestion.

Offshore Waiting on the East Coast of North America

Offshore waiting at the Port of New York and New Jersey has reached a record high since the Corona pandemic.

Port officials are watching for a surge in imports once Chinese factories resume production.

Gulf and East Coast ports are also bracing for increased cargo volumes as shippers divert cargo from the West Coast.

Last year during the Christmas season, goods were not delivered, so they are preparing for the same thing to happen.

Then, once the Shanghai lockdown is lifted, shipping volume will surge.

On the other hand, inflation is also causing a decline in purchasing power.

New home sales in the U.S. in April fell 16.6% from the previous month to the lowest level in two years, causing prices to rise and interest rates to spike.

The key point to watch is how much demand will fall in North America.

Some news recently reported that demand appears to be falling.

We don’t have an answer yet, but for me personally, I expect supply chain disruptions to continue throughout this year.

I hope today’s information is helpful.