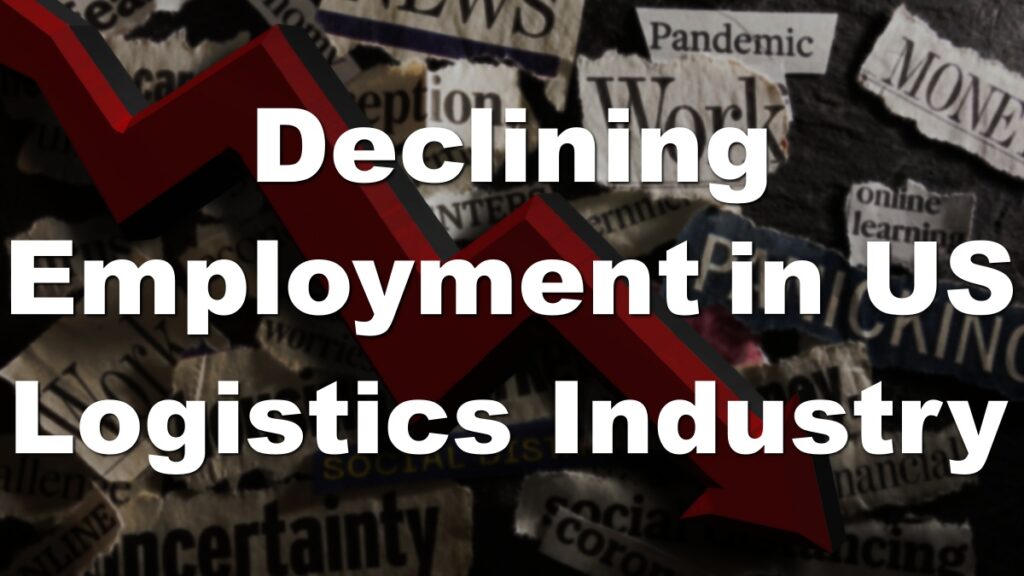 Today, I would like to talk about, “May 2022, employment in the logistics industry in North America decreased.”

Since the Corona pandemic in North America, there are signs that demand is waning and consumer spending is shifting from goods to services.

Companies on the front lines of the supply chain pulled back employment in May.

According to last Friday’s preliminary U.S. jobs report, trucking, warehousing, and courier companies added a combined 32,900 jobs in May, down from 44,700 in April.

Employment in the transportation industry has been declining.

Even though the U.S. as a whole added 390,000 jobs in May, employment in the transportation industry declined.

In the 2021 Corona pandemic, trucking and warehousing saw employment growth.

With demand growing and warehouse operators raising wages and competing for workers, trucking companies have added over 70,000 jobs in the past year.

Trucking companies were so successful in their hiring practices, such as raising starting wages and offering contract bonuses.

It made some independent truck drivers work for large trucking companies.

And warehouse-related companies have added 176,700 jobs over the past year, despite rapidly rising wages and a tightly competitive labor market for hiring and retaining workers.

Over the past year, employment in the logistics industry has increased anyway.

But logistics giant, Amazon.com, which has driven much of the competition for jobs and workers in the logistics market, recently announced that it is suspending the aggressive expansion of its network of distribution centers and shipping operations.

With moves like these, economists are watching for signs that the wave may be changing as record employment continues in the United States.

According to one set of data, courier and messenger companies, which include package carriers that deliver e-commerce orders to homes and businesses, added about 15,000 jobs in April, but only 1,900 in May.

More recently, consumers appear to be returning to stores, and major retailers, including Amazon, have reported that online sales growth has receded from historically high levels.

However, the director of economic research for North America at Indeed.com, a job site, said the change has not significantly altered employment in the logistics industry, and “transportation and warehousing continue to be strong.”

Employment data show that logistics industry hiring fell in May, and Amazon is also holding off on hiring.

With Corona also dawning and people returning to stores, trucking hiring may be calming down.

However, there is a logistics bottleneck in inland North America.

They are trying to get containers out of the ports as quickly as possible, but there are reports that they have just moved inland and there is still congestion inland.

Is it safe to add more truck and warehouse personnel when the inland logistics have not yet been resolved?

There is also a shortage of parts for trucks, and the production of trucks themselves is declining.

Demand for goods in North America may be calming down, partly due to inflation, rising interest rates, and a reluctance to buy homes.

But even though there is still a congestion, will it be resolved without more trucks and warehouse personnel?

Has that much consumption moved into services?

Compared to last year, human resources have increased, but is the labor force sufficient at this point?

I will continue to keep a close eye on the truck and warehouse labor force in North America.