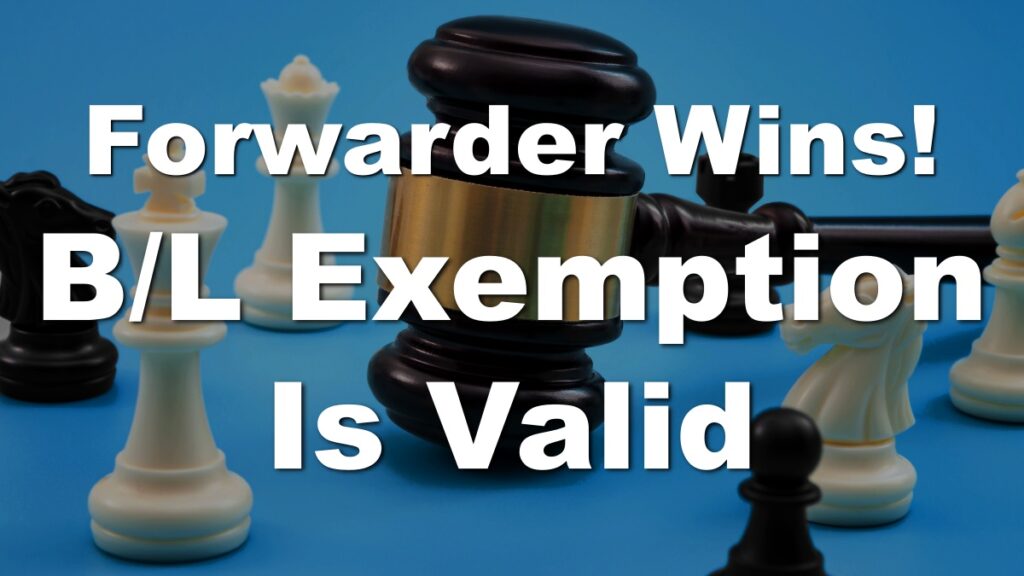 Today, I would like to talk about, “Compensation for Water Damage in Containerized Cargo, Exemption from B/L Clauses Valid. Forwarder prevails in Supreme Court.”

There was a trial in which an insurance company sued a forwarder for compensation for water damage to a cargo in an ocean container in transit.

In May, the Supreme Court rejected the insurance company’s motion to accept the appeal, and the forwarder won the case.

The subject cargoes were 20-foot containers transported from Bangkok, Thailand to Yokohama, Japan, and consisted of automobile-related goods cargoes worth several thousand dollars in total.

When arriving at Yokohama, water damage was discovered when the container was opened.

This cargo was a shipper’s pack container, which is packed in vans at the shipper’s responsibility.

Loading cargo into containers is called vanning, and in the case of FCL, shippers generally load the cargo themselves.

In the case of LCL, it is called carrier’s pack, and the shipping company or forwarder vans the cargo in vans.

In this case, the key point is that the shipper vans the cargo in a shipper’s pack.

Because of water damage to a cargo, the shipper used its insurance to obtain compensation for the damage, and the insurance company demanded that the forwarder pay the compensation costs.

When the insurance company pays, it bills the company responsible for the problem for the amount it paid, and if it doesn’t pay, it sues.

From my forwarder’s perspective, I am a bit surprised. How can they sue us for this? I thought frankly.

The following three points were disputed in the trial.

For your information, B/L is in the format of JIFFA, Japan International Freight Forwarders Association, and the terms and conditions of B/L are the promises made during transportation.

Hagel Rules are an international treaty that stipulates in detail the rights and obligations of carriers in contracts of carriage by sea.

It stipulates the liability of the carrier in the event of an accident, and is also the basis for pursuing the carrier’s liability.

In addition to Hague Rules, there are also Hamburg Rules and Rotterdam Rules, but Japan has ratified the Hague Rules.

The case involved a major property and casualty insurance company, which was the plaintiff, suing a forwarder in Osaka, Japan.

The point is the interpretation of Hague Rules.

The insurance company argued that “the carrier’s immunity from liability for cargo damage during ocean transportation is prohibited by the Act.”

It means that if there is cargo damage during ocean transportation, the carrier should take proper responsibility for the damage, not be exempted from liability.

And the terms and conditions of B/L on JIFFA form contained a provision for the carrier’s exemption from liability in shipper’s pack containers.

Furthermore, Hague Rules “prohibits disclaimer clauses between receipt and delivery of the cargo,” while allowing pre-shipment and post-unloading covenants.

In other words, while it states that the carrier should take responsibility for cargo damage between receipt and delivery of the cargo, there is a special clause before shipping at the terminal and after unloading, where the carrier is exempt from liability.

Arguments from Both Sides

While the court found that the water damage occurred on the contractual transportation section, it ruled that the occurrence itself occurred either before or after the shipment, and therefore, the indemnity clause was valid.

It also argued that this violated Hague Rules prohibition against indemnification clauses, but the court rejected this argument.

In other words, the court ruled that the forwarder was exempt from liability for damage caused by problems that occurred at the terminal and did not have to assume responsibility.

Furthermore, the insurers also took up and argued for other treaties that are slightly stricter than Hamburg Rules and Rotterdam Rules, but none of these were accepted, stating that Japan had ratified Hague Rules.

Model Cases for the Future

Nevertheless, the court stated that it cannot be said that the interpretation of the contents of shipping and unloading under the Carriage of Goods by International Sea Act is immediately settled.

This decision has given a powerful countermeasure to forwarders who are carriers, and the precedent is likely to serve as a model case for similar cases in the future.

As for cargo damage and compensation, the law is involved and it is best to ask an expert for more details.

I did a lot of research on my own and found this news to be very informative, so I thought I would share it with you.