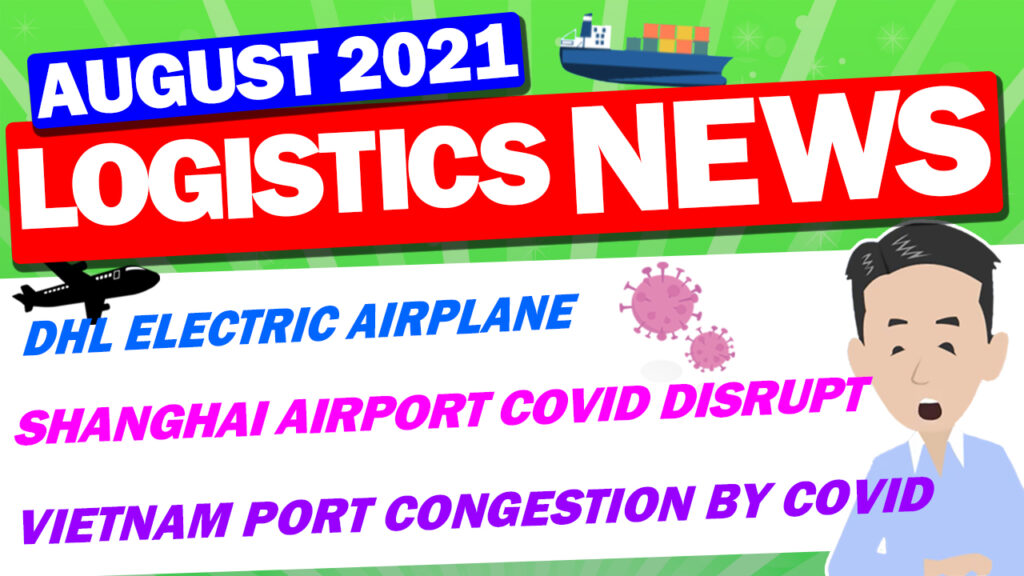 This time, I would like to present you with the logistics news for August 2021. Please enjoy the useful information I selected for those who want to know about “the newest logistics”.

Outbreak of infected people at Ningbo Port, China. Impact for logistics due to some container terminal blocked

One person infected with the new coronavirus was confirmed at the Port of Ningbo in China on 11th August.

Because of it, Meishan Island Container Terminal at Ningbo Port where the infected person occurred was closed on the same day.

Ningbo Port is the second largest port in China in terms of container handling volume and is an important hub for container logistics in East China along with Shanghai Port.

Therefore, there are concerns about port congestion and logistics disruptions which is similar to those at Yantian Port where a corona outbreak occurred at the end of May this year.

As of the 17th August, the only container terminal closed in Ningbo Port is Meishan Island while other major terminals are operating as usual.

So, the impact on international logistics is limited at this point, but if it continues for a long time, it will lead to major problems.

According to a document, released by Ocean Network Express (ONE) on 13th, “The impact of the shutdown of the Meishan Island Container Terminal is not significant at this time. However, some of the vessels that were scheduled to call at Meishan Island will now call at other terminals, so there will be some impact in the future”. 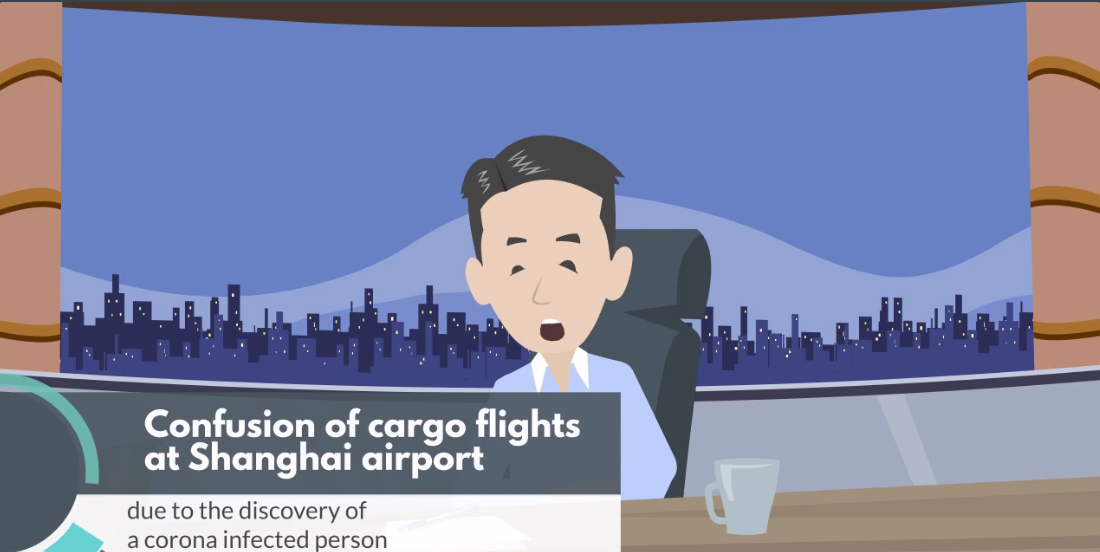 The chaos at Pudong Airport in Shanghai, China, has become more serious.

As a new corona infected person was confirmed on 21th, and the air cargo handling function was effectively suspended from the morning of that day. 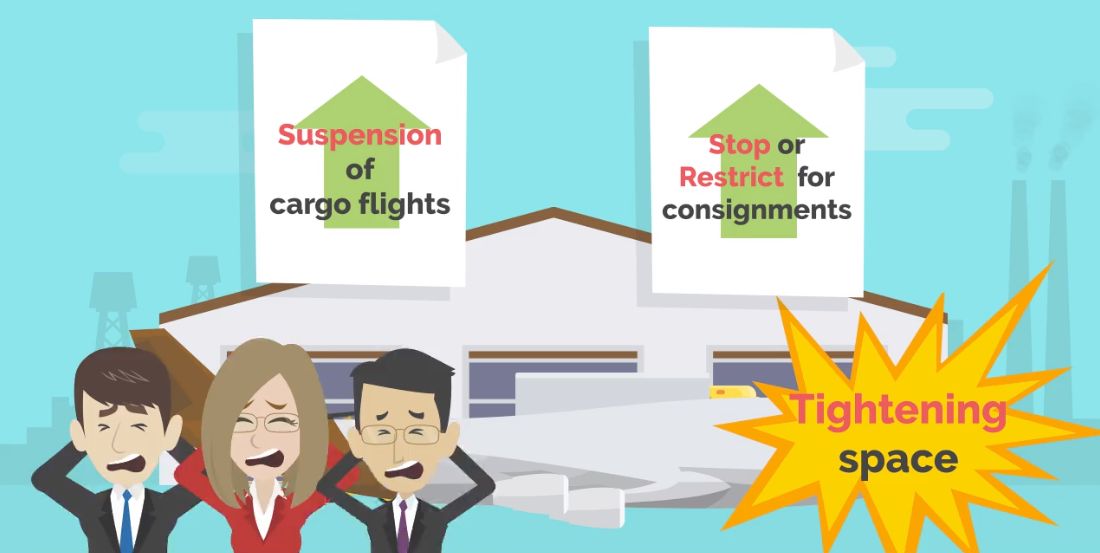 Although some shed operations resumed on 23rd, suspension of cargo flights and stop or restriction of consignments have been expanding.

Space for passenger belly and cargo flights in operation is also tightening and airfares are rising. In the worst case, the disruptions are expected to last for several weeks.

Usually, cargo movement for the Christmas shopping season in Europe and U.S. starts in September, so if the disruptions are prolonged, the impact of the problem will be significant.

The ports of Los Angeles and Long Beach have seen 37 container ships docked in recent days, which is the highest number since February.

This is partly due to U.S. year-end sales and inventory replenishment and shippers are bringing forward imports for the holiday season.

At major hubs in the Midwest, containers are piling up so much that they limit shipments from the West Coast to Chicago. 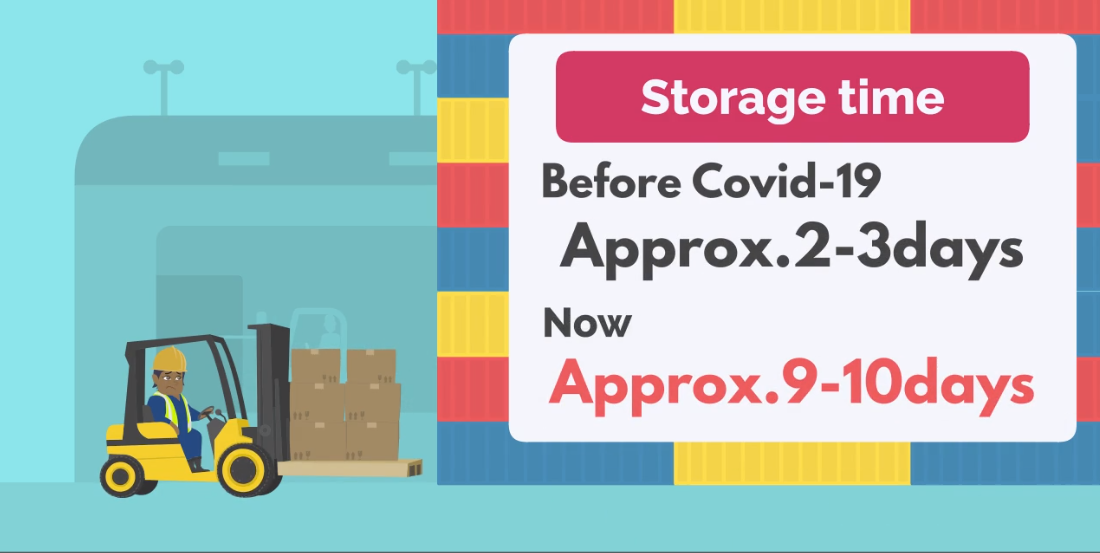 Also at the terminals containers pile up, since record volumes are straining the capacity of trucks and railroads.

As a result, the storage time for containers before moving inland has worsened from an average of two to three days before Corona to it of nine to ten days now.

In Vietnam where the new coronavirus infection is spreading again, a lockdown has been implemented in major cities since late July, and it affects logistics. 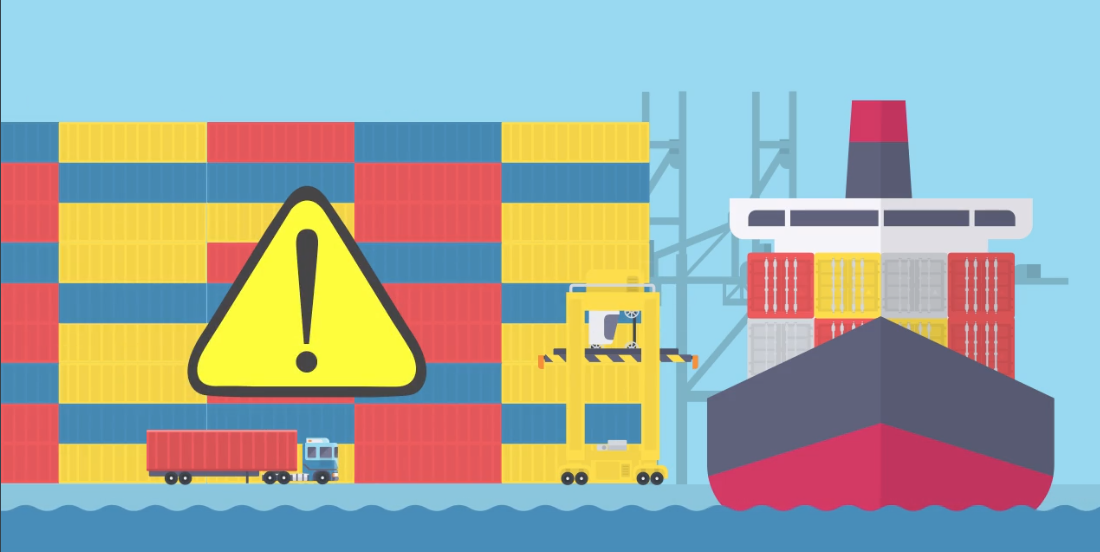 It has been congested due to the increase in logistics since last year at ports in Vietnam. In addition, it has become difficult to secure workers due to restrictions on movement caused by the lockdown.

Moreover, due to the shutdown of factories, import containers have not been picked up, which causing serious congestion at the ports of containers piled up.

Saigon Newport which operates Catrai port near Ho Chi Minh City in the south has suspended the pickup of large cargoes. And it issued a notice requesting early pickup of imported cargo and calling for an end to congestion.

A local representative of a Japanese logistics company said, “If the shutdown of factories continues for a long time, imports of parts and materials will slow down and the congestion may be alleviated. However, basically exports are strong. Unless the concentration of Catrai port is corrected such as by using other inland depots to pick up empty containers, cargo handling may be suspended”. 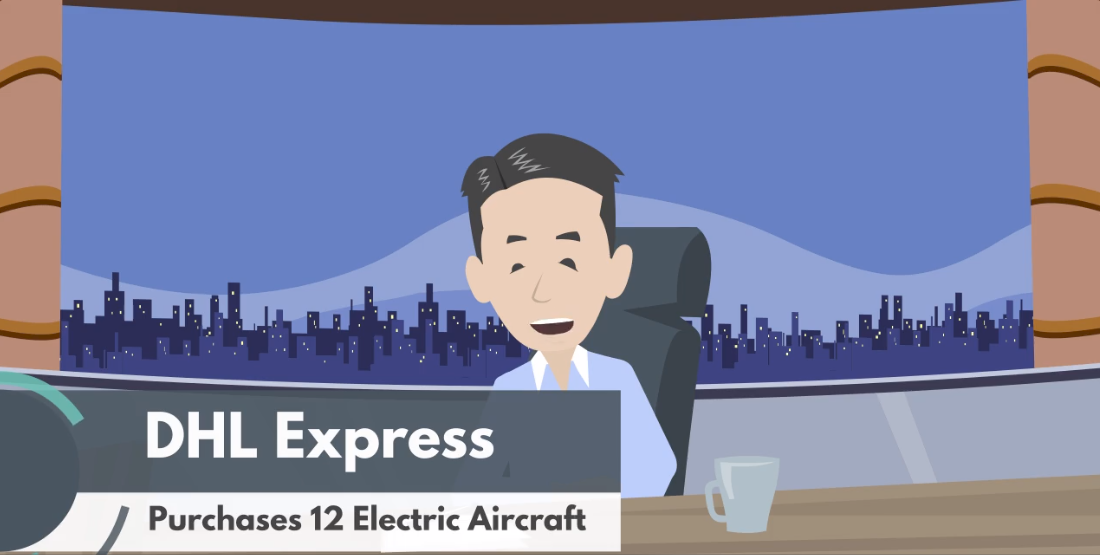 On 3rd August, DHL announced that it has purchased 12 electric aircraft from Eviation to operate on all of its routes.

In a statement, the company said, “To achieve clean logistics, electrification of all modes of transportation will contribute to the goal of zero emissions.”

The Alice eCargo plane, electric aircraft, has a payload of about 1,800 kg, a range of 815 km, and can be recharged in flight in less than 30 minutes. 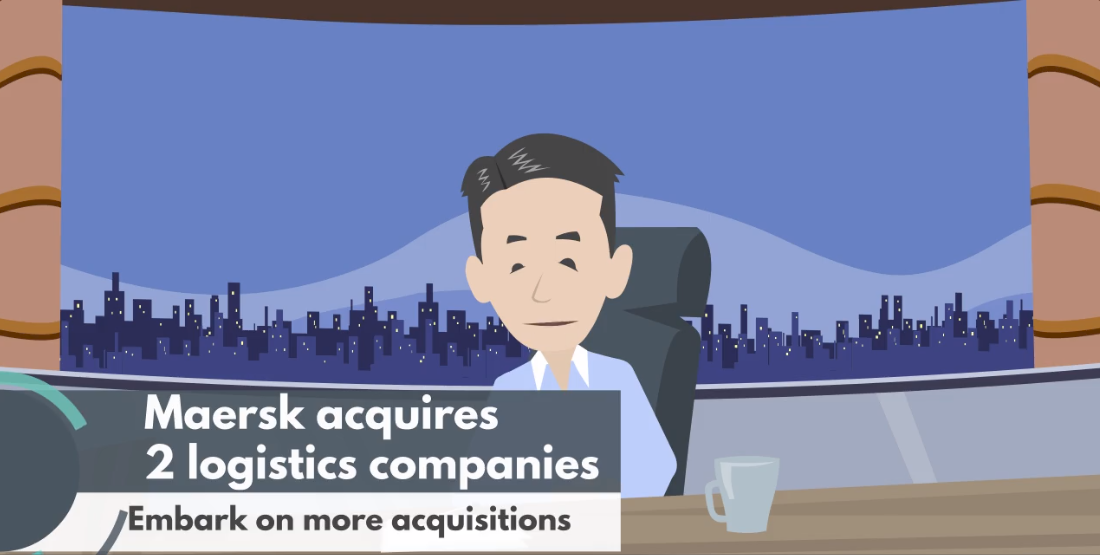 Maersk, the world’s largest shipping company, has made acquisitions worth about USD1 billion.

The two acquisitions are, Visible Supply Chain Management LLC based in Salt Lake City, U.S., and B2C Europe based in the Netherlands.

Those involve acquisitions and investments in the field of warehousing, customs brokerage, and trucking technology, so it represents Maersk will expand the business not only ocean freight but also inland logistics. 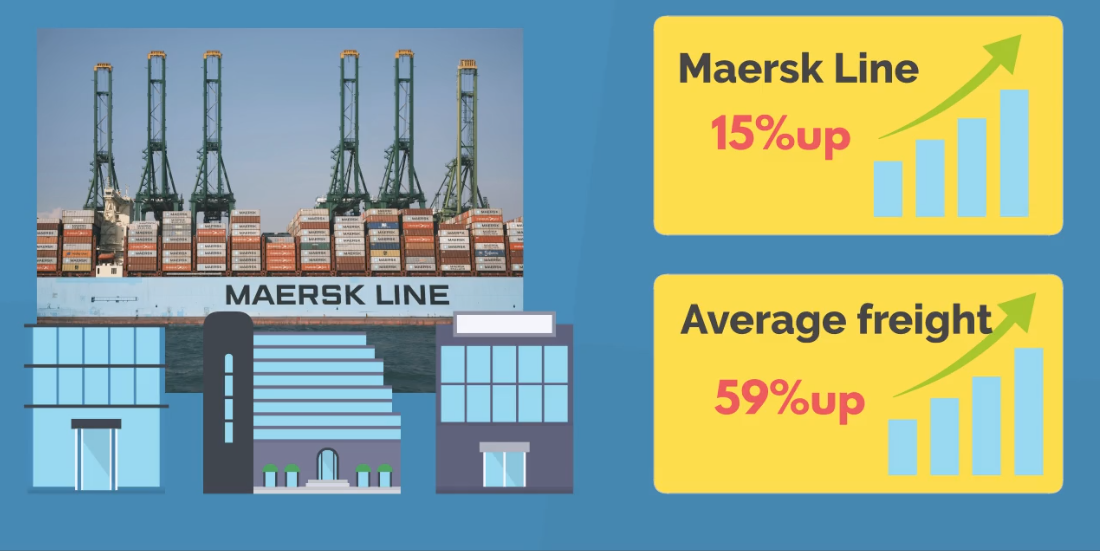 Maersk reported solid earnings partly due to booming of the global shipping market.

The strong performance also suggests at the possibility of further larger acquisitions.

DSV Panalpina completes acquisition of Agility business and becomes No. 3 in the world 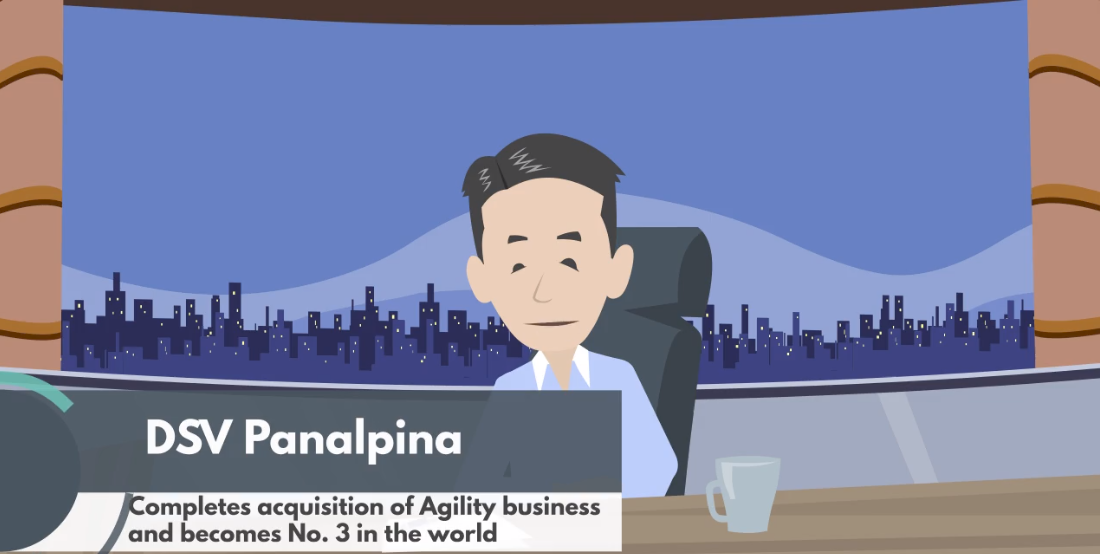 DSV Panalpina, a major international logistics company, announced on 16th that it has completed the acquisition of Global Integrated Logistics (GIL), the general cargo division of Agility which is a major logistics company in the Middle East.

The company will become the third largest in the industry worldwide after Deutsche Post DHL and Kühne+Nagel with the acquisition of this business.

DSV Panalpina is expected to expand its forwarding business and its operations in the Middle East and Asia Pacific regions.

It will also utilize approximately 1.4 million square meters of warehouses owned by Agility to strengthen its land transportation in Europe and the Middle East.

Now let’s get to the news commentary section.

In August, I had the impression that there were many problems to lead to logistical confusion, especially in China.

The shutdowns at the Ningbo Port and Shanghai Airport in China have actually had a major impact on the supply chain.

Ningbo Port is a huge port with the third largest container handling volume in the world. If this port becomes congested, ships will omit Ningbo Port and load and unload in Shanghai or other ports to avoid congestion.

If this happens, Shanghai port may become congested. In case of it, it causes that it is difficult to secure space for main vessels at Shanghai port and leads to higher ocean freight rates. 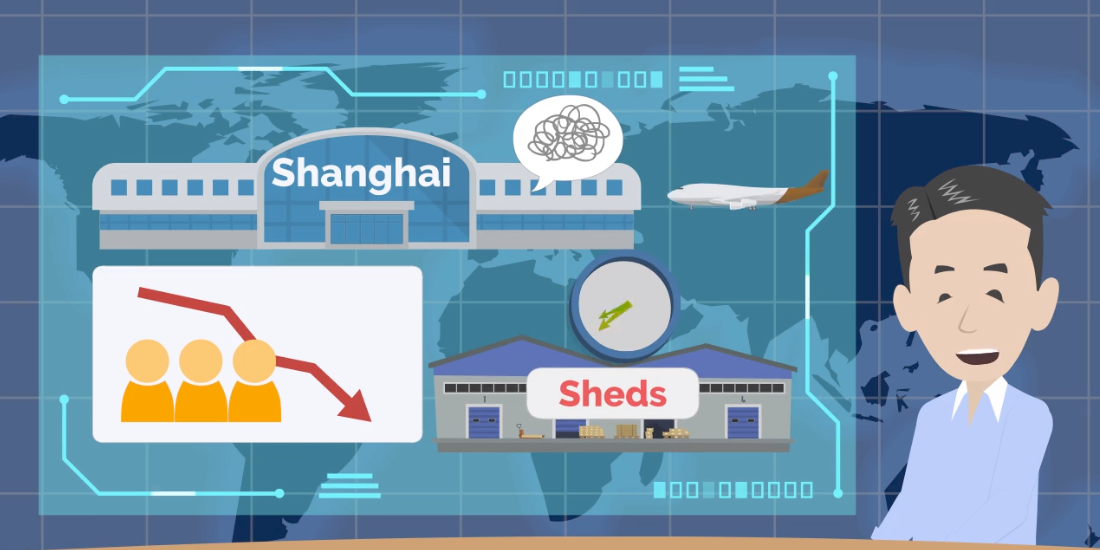 And Shanghai airport is beginning to get confused as well.

There is a shortage of labors to handle the luggage in the sheds and the work that normally takes 2-3 hours to complete is now taking 6-10 hours, and more and more people are leaving their jobs.

Because the work at the shed is taking so long, there are some passenger planes flying without cargo for exports, and in case of imports, some planes are heading to the next airport with cargo on board, so it’s very confusing.

Air freight have actually gone up by about USD 1.5-3/kg for North America and USD 0.7-1.5/kg for Europe. Attention should be paid to the future development.

And the congestion at U.S. ports has been reappearing since August.

Normally, cargo demand for the Christmas sales season in North America starts in September, but due to the recent supply chain disruptions, it has been moved up to August.

It is really difficult to secure space for container transportation to North America and we have received many inquiries about shipments from Thailand to Long Beach and New York.

Fortunately, there are many cases that we can book the space, but it seems that some shippers are losing money just by sending the goods due to high ocean freight rates.

It will probably be after October when China’s National Day begins that the congestion and prices start to settle down.

Furthermore, the lockdown in Vietnam is also affecting logistics.

I talked to a forwarder in Vietnam online the other day and he said that the factories are starting to operate, but production is lower than usual and work is down.

Anyway, all I can do is pray for the vaccine to be distributed and for a recovery as early as possible. 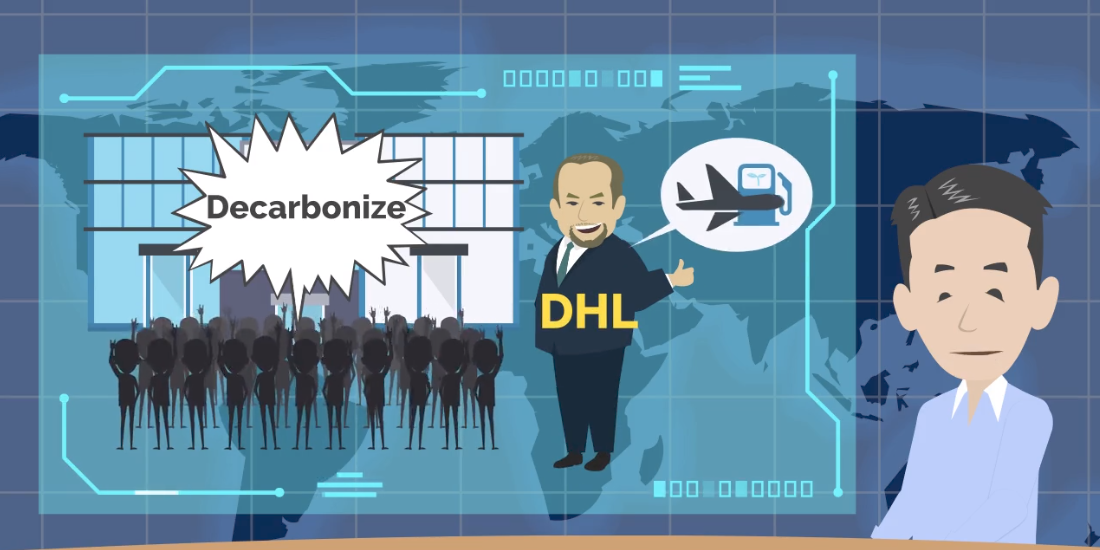 Logistics is congestion at the moment, but major companies are starting to take action to decarbonize the international environmental theme.

I was surprised the news of DHL’s electric aircraft.

I had no idea that it has already been the era that cargo planes can fly by electric, so I thought I should pay attention to news like this.

Since this electric aircraft looks very futuristic and cool, so I hope that young people will become more interested in logistics. 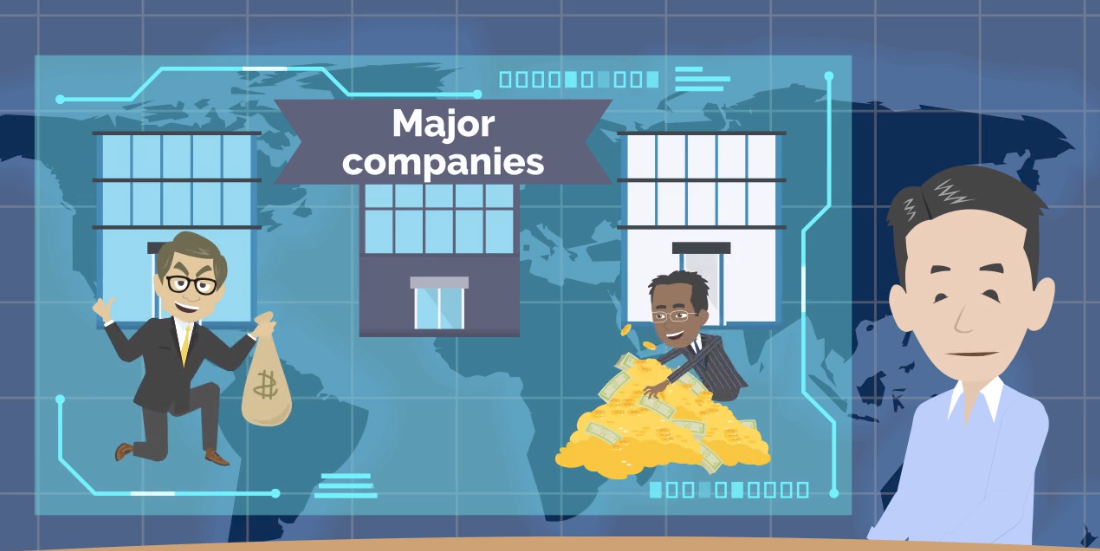 And finally, there are acquisitions by major logistics companies. As I mentioned last month, shipping companies and major forwarders are making a lot of money these days.

It seems that this is good opportunity for the logistics industry to expand their business and M&A are taking place every day.

This time, it was attention that Maersk, a shipping company, entered to the field of inland logistics.

In addition, as for the merger of DSV Panalpina and Agility, it is expected that mergers between major companies will further take advantage of economies of scale to expand their market share.

On the other hand, there are actually some small and medium-sized forwarders who cannot get space. 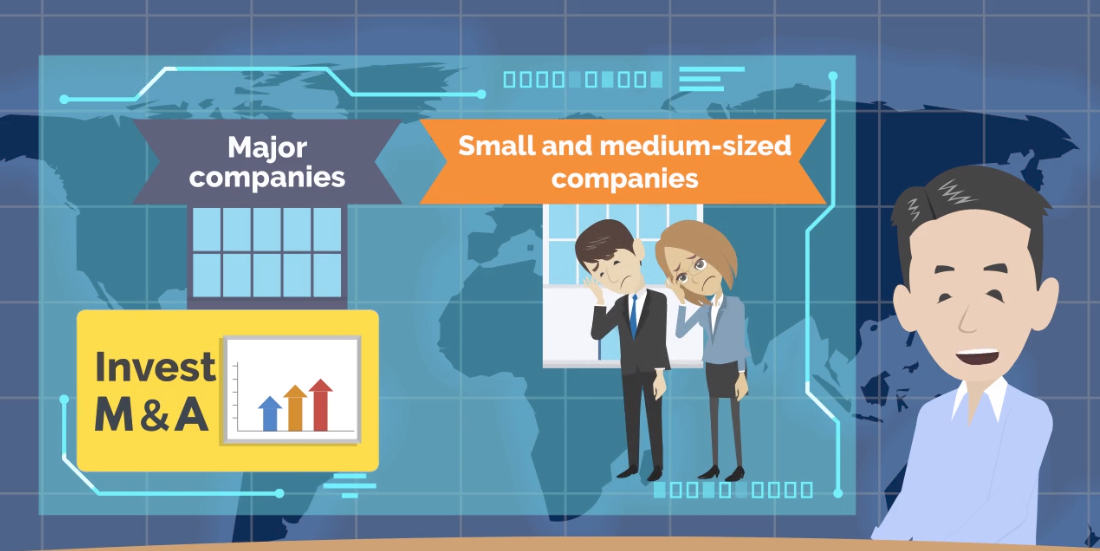 In this sense, major companies will use the profits they earn to invest and conduct M&A and grow even larger, while small and medium-sized forwarders who cannot take up the space will not be able to get work and may find it difficult to survive.

I have the impression that the number of players is limited just like in the late Warring States Period.

I’m not a stranger to this, and thinking that I need to take control of my business.

What did you think of the logistics news this time?

The sources of the news referred to in this video are linked in the summary section, so please refer to them for details.

Also, I’ve recently been working on a project called IINO san’s Logistics Radio which is an audio feed on YouTube and Stand FM.

I mainly update daily news and logistics-related chatter every day, so if you get interested in it, please subscribe or follow it. I’ll put link in the summary section.

That’s all for now from the field! Thank you very much!