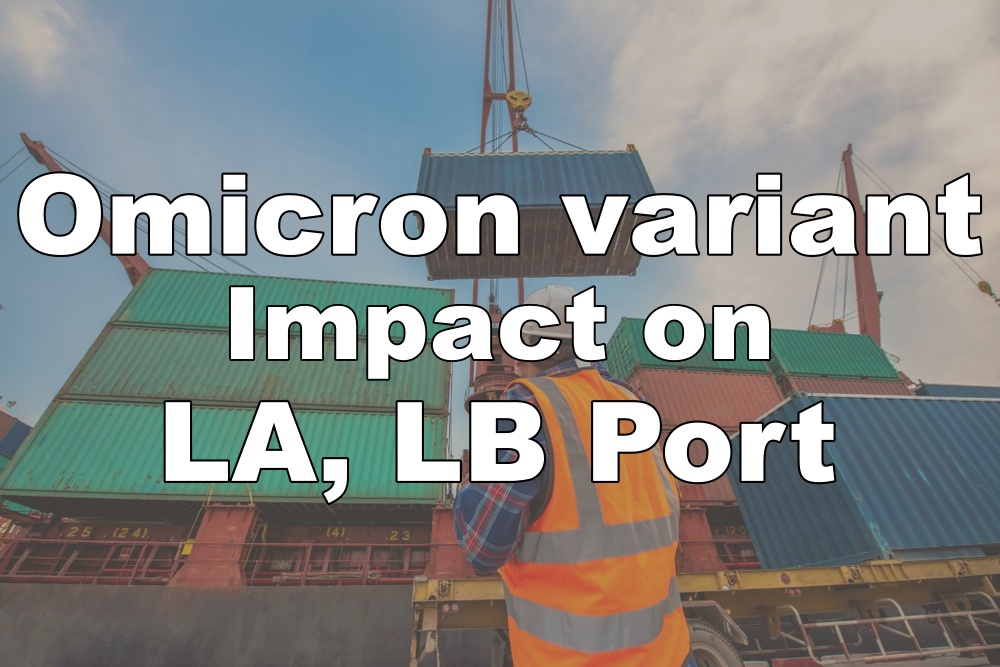 Today, I would like to talk about the news from the Wall Street Journal, “A surge of Omicron Variant infections at the North American ports of LA and LB. Big impact on the ports.”

800 Absenteeism Related to Corona at Port of LA and LB

This week, it was reported that about 800 dockworkers were absent from work at the ports of LA and LB for corona-related reasons.

It is roughly 1 in 10 of the daily workforce.

This has had a major impact on the clearing of a backlog of about 100 container ships at the busiest port in the US.

The absentees include the following;

According to the association, which secures the labor force of terminal operators on the West Coast, the number of daily workers infected has increased dramatically in the past few weeks, from a few to dozens per day.

This is situation of an overwhelming shortage of manpower.

The Port of LA and LB have been inundated with imports, with unloading reaching 100 ships in late November and a record 106 ships on New Year’s Day.

At one terminal at LA Port, a growing shortage of workers that began during the Christmas and New Year’s holidays, has led to a drop in terminal productivity of about 20 percent.

Expansion of the Omicron Variant

It is said that even if you are actually vaccinated, you can still be infected with Omicron.

In Los Angeles, where many longshoremen live, 200,000 coronavirus-positive cases were recorded in the week ending January 8th.

Sea-Intelligence, a Denmark-based marine consulting firm, reported January 11th, that congestion and bottlenecks are worsening in U.S. and European ports.

The Biden administration took measures last year, including 24-hour operation of terminals, and fines for overstaying containers, but it had limited success.

Chief Executive Officer of the Pacific Maritime Association said, terminals might be able to catch up on some of the work backlog, if factories in Asia reduce operations during the Lunar New Year, which begins in a few weeks.

However, most members of the Pacific Maritime Association, including the world’s largest ocean carriers, expect the surge in cargo to continue through the next six months, if not through the end of 2022.

This is not to say that the Omicron variant is safe because it is less severe.

It is reported in the media that Omicron is less severe and can be treated with mild illness, but the doctors say that severe illness means that the patient may not survive.

In North America, there have been news reports of a million people being infected a day.

It is not only among dockworkers, but it must be also affecting everywhere in the supply chain, driver shortages, warehouse workers and consignee factories.

The impact of Omicron is significant, and the disruption to the supply chain will continue to be prolonged.