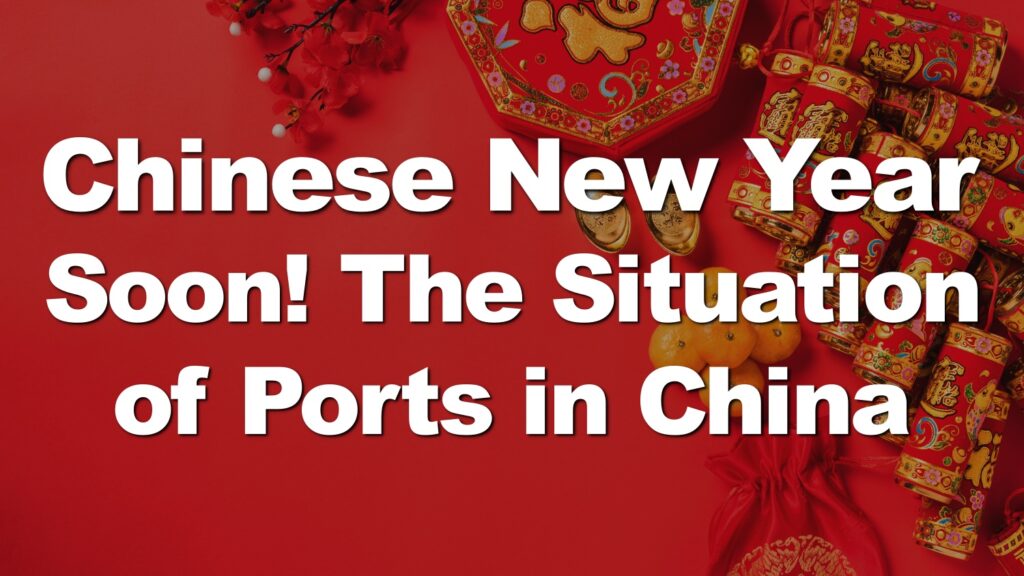 Today, I would like to talk about, “the current situation of Chinese ports before the Chinese New Year” from an article on Job.com.

Factories will be closed for about two weeks during the Chinese New Year, which begins on January 31. Now, shippers in China are facing more disruptions and delays.

Let’s take a look at the situation at each port.

First, the Port of Shenzhen’s Yantian Container Terminal handles about 25 percent of China’s trans-Pacific exports to North America and elsewhere.

The Yantian Container Terminal has begun to limit the return of export containers containing cargo to four days before the ship docks, due to significant congestion in the terminal yard.

Return means to take the container from the factory to the terminal port.

Elsewhere, Shenzhen’s Shekou Container Terminal only accepts export containers within three days of the actual vessel’s arrival at the port.

Due to congestion in the yard, they regulate bringing it earlier than prescribed.

Shortage of Space in Container Yard

The shortage of space in container yards is a result of delays in vessel schedules due to congestion in U.S. and European ports.

Currently, the average delay is over a week.

The other issue is the regulations for truck drivers. CFS in and around the port is open, but drivers must pass a Covid test within 48 hours to enter.

Shipping company HMM has noted delays in berthing at the ports of Shanghai, Dalian, and Ningbo, and has stated that these ports are also suffering from yard congestion and labor shortages.

It said trucking capacity will be limited as drivers take vacations during the long Chinese New Year vacation.

As a result, MSC has suspended calls to Ningbo for a month on some routes, and Hapag-Lloyd has diverted ships on two routes that normally call at Ningbo to Shanghai.

In Tianjin, the Omicron variant is discovered two weeks ago. Therefore, local forwarders warn, “it may further restrict transport capacity and movement.”

However, port operations in Xiamen and Qingdao are running almost normally.

As you can see, the situation seems to differ from region to region.

It has been a difficult situation before the Chinese New Year with delays of mainline vessels, restrictions on drivers by Corona, and congestion at terminals all over China.

At the end of the article, shipping lines expect container volumes to ease from February 7 and recover sharply closer to February 20, as most factories will be closed from early next week until February 14.

Both MSC and Maersk have stated that they will suspend operations on certain routes during the Chinese New Year.

In that sense, after the Chinese New Year, the container shortage is expected to be resolved a bit.

I think the key point to watch is how much of the congestion on the West Coast of North America will be resolved during this period of reduced transportation from China to North America.