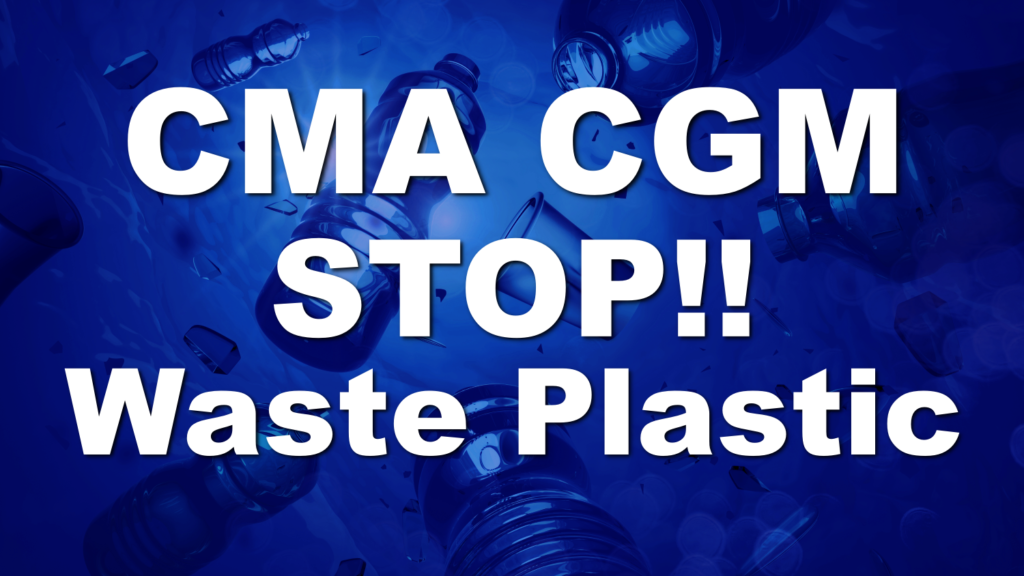 Today, I would like to talk about “CMA-CGM halts all transport of waste plastic”.

The French shipping company CMA-CGM has announced that it will stop transporting waste plastics from June 1, 2022 in order to protect the environment.

Plastic waste entering the oceans is causing serious damage to the ecosystem.

On the other hand, recycled resource cargoes account for a large portion of export cargoes from developed countries including Japan.

The article reported that the suspension of transportation by major shipping companies is likely to have a significant impact on trade.

The Situation of Waste Plastic in Japan

The data is a bit old, but according to JETRO, Japan’s waste plastic export volume in 2017 was 1.43 million tons.

Japan is the world’s third largest exporter of waste plastic after Hong Kong and the United States.

However, since the end of 2017, China has banned the import of waste plastics mainly derived from daily life, so exports to Southeast Asia and Taiwan have been increasing since 2018.

Exports to these four countries and regions accounted for about 80% of Japan’s total waste plastic exports in the first half of 2018.

The reason why they are sent to countries with low labor costs is because they need to be sorted.

I am arranging the logistics of scrap iron and copper in Thailand.

The scrap collected includes garbage and other materials, which are sorted by hand.

In the case of waste plastics, after sorting, there are two recycling methods

The Volume of Transaction of Waste Plastic by CMA-CGM

Especially from the U.S., it is the largest shipping company handling 8,000 FEU per year.

According to the CMA-CGM, more than 10 million tons of waste plastic enter the oceans annually.

And this amount is expected to nearly triple to about 29 million tons per year over the next 20 years.

CMA-CGM believes that this influx of waste plastic into the oceans is accelerated by the fact that the collected waste plastic is not stored outdoors or treated with proper infrastructure.

In fact, waste plastics sent to developing countries are often not properly sorted and treated, and some people have criticized that they are exporting environmental pollutants.

Therefore, CMA-CGM will prevent the export of waste to regions where proper sorting and recycling cannot be guaranteed by suspending the sea transport of waste plastics.

On the other hand, some people who have properly processed are questioning the regulation of waste plastics.

I think it is natural for companies that properly dispose of waste plastics to ask why.

CMA-CGM group has not specified the HS codes of the cargoes it will not accept at this time.

There may be confusion for a while after June, when transportation will be suspended, and it will be interesting to see whether other companies will follow CMA-CGM’s policy.

Currently, companies are focusing on environmental measures, including the SDGs and decarbonization.

I was living in Thailand for 8 years and there is no segregation of household waste, but when I looked into it, I found that there is a project in Thailand to try to segregate it.

The provision of free plastic bags has been banned since 2020.

Since there was a lot of littering of plastic bags, Thailand tried to take measures to crack down on it.

Since returning to Japan, I have found that Japan does a good job of separating waste and the concept of recycling in daily life is not quite the same in Thailand.

In fact, I don’t know if the sorting and recycling process is done properly in Thailand and other countries.

This time, CMA-CGM has decided that those countries are not able to do so, so made it clear that it will not be involved in environmental pollution by not transporting them.

I think this is also a global trend.