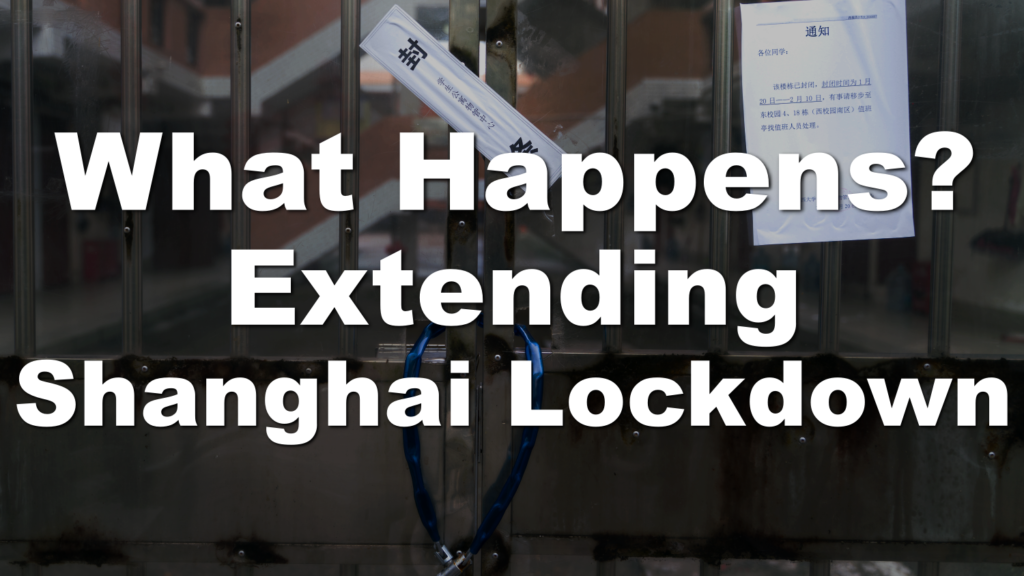 Today, I would like to talk about, “Shanghai Lockdown to be Extended Beyond Initial Deadline, Logistics Disruption Likely to be Prolonged”.

During the Shanghai lockdown, the Port of Shanghai itself continues to operate.

However, restrictions on land transportation have hampered container loading and unloading, causing import cargo to remain at the port.

The container terminal at the Port of Shanghai continues to operate.

And workers remain in the port area, isolated from the outside world, and stay overnight to work on cargo loading and unloading.

However, the efficiency of the work seems to be declining as some workers are infected with Corona.

Due to problems with plugs for reefer containers and other yard facilities, some shipping companies operating Japan-China routes have decided to temporarily suspend the booking of reefer cargoes and dangerous goods bound for Shanghai.

There are a limited number of power plugs and outlets in the port, and since cargo is not being carried out, there are no plugs that can be supplied.

In addition, drivers taking containers out of the port are not willing to work at the Port of Shanghai.

For container loading and unloading at the Port of Shanghai, drivers must register on a special app and provide proof of negative corona within 48 hours.

For land transportation across the province, a quarantine period after return is also required.

Although it is possible for emergency shipments that the driver is paid a special allowance to carry the cargo, it is impossible to do it for all cargos.

As for cargo outside of Shanghai, it is virtually impossible to carry it in and out of the Port of Shanghai.

The government issues “transit passes” for the transportation of essential goods such as foodstuffs, but there are reportedly moves to abuse using the pass for purposes other than their intended use.

In addition, CFS, Container Freight Station, in Shanghai is practically “closed” due to lack of manpower.

CFS is a place where LCL cargo is collected and made into a single container, and LCL cargo has ceased operations.

It is not a good idea to operate only at the port because there are restrictions outside the port.

Due to the difficulty of moving within and outside of Shanghai, shippers are considering shifting to Taicang Port, Ningbo Port, which are close to Shanghai Port.

The Port of Taicang is about an hour’s drive from central Shanghai, but even here, there are corona infections, and drivers are not willing to work there.

The Port of Ningbo has many alternative services for long-distance routes such as Europe and the U.S., but there are only a limited number of near-sea routes such as the Japan-China route.

One forwarder who handles imports to Japan stated, “We have shippers arrange to have their cargo forwarded to North China ports such as Qingdao and Shidao, and from there we use alternative transportation services.”

However, the article reports that long-distance land transportation itself remains difficult, and the development of alternative routes has reached a deadlock.

The more urgent the alternative arrangements, the more difficult it becomes to handle.

In this case, due to the sudden extension of the Shanghai lockdown, there is often no space on the ship for the following week, even if arrangements are made for another port.

If you have already placed a container bound for Shanghai in the port, you will have to remove the container and rearrange space with another shipping company.

In some cases, cargo may be removed from the container, unpacked, and switched to air for transport.

In urgent cases like this one, we are in a position to arrange a replacement if we are lucky.

It is quite difficult to suggest a short term replacement because it is not in normal times, but it is now in Corona pandemic.

The lesson to be learned is that China has closed its ports so many times in the past that this kind of thing may have had to be thought of as a given.

However, it is very difficult to predict because of the accidental nature of the situation.