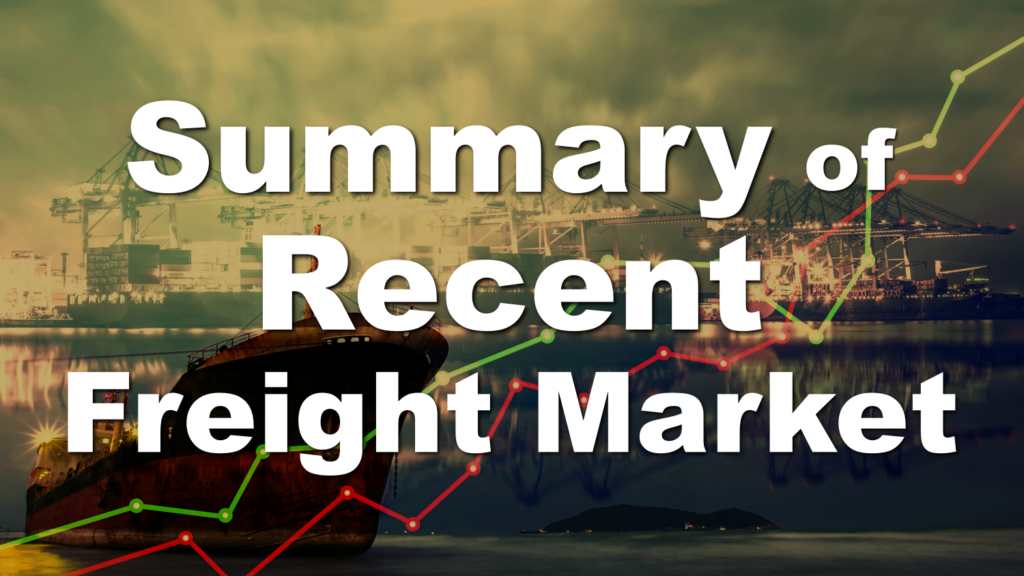 Today I would like to talk about “Container Freight Rate Market Softening is Temporary, with High Prices in Mind” from “Reporter’s Angle by Yohei Misaki” column.

Negotiations for this year’s service contracts are already in the final stages.

In the negotiations between major BCO, actual shippers, and shipping companies, freight rates themselves were not a point of contention.

Shippers’ space-first attitude was evident, and more shippers were seeking multi-year contracts than in previous years.

However, in some cases, small and medium-sized shippers who cannot use a lot of manpower to international transportation operations were unable to make appropriate decisions.

Even though the shipper’s logistics staff understood the situation, they could not get other departments, such as production and sales, to understand the large increase in costs.

And they asked the shipping company or forwarder’s staff to renegotiate with them to see if they could provide cheaper one.

For the shipping companies and forwarders, there are shippers who will load at that rate, so they have no choice but to refuse, saying, “We cannot load at that price.”

Some Companies Fall into a Vicious Cycle

In the meantime, space was further reduced, and the price offered by shipping companies and forwarders went up even more, and some shippers fell into a vicious cycle.

A foreign forwarder stated, “We have been providing considerable information, but there are still shippers who do not understand the situation.”

I have also been saying this through YouTube and other means, but I have recognized that the message has not yet been conveyed.

I think the matter of resolving space shotage and high freight rates are the biggest concerns of those involved in container logistics.

The April 5 issue of THE JAPAN MARITIME DAILY reported, “Container Freight Rates Continue to Soften for Europe and the United States.”

Looking at the headline alone, one might think that soaring freight rates are finally on the way down.

However, even with the “softening,” spot freight rates from Shanghai to the East Coast of North America are still above the $10,000 level.

Furthermore, due to the lockdown in Shanghai since the end of March, production and shipments is constrained. Some believe that once the lockdown is lifted, shipments will increase again and supply and demand will tighten.

While it is true that freight rate hikes have been halted, the article reports that the fundamental problem has not yet been solved, and there has been no significant change in the situation of high prices.

Offshore at the ports of Los Angeles and Long Beach, the number of vessels dropped to the 40s in mid-March.

Although this can be described as a “significant improvement” since the peak period saw more than 100 vessels, the actual decline was largely due to a decrease in the number of flights from the Asian side due to flight cancellations caused by schedule delays and other factors.

There is also an ongoing problem of a shortage of drivers for container loading and unloading docks, and although the “worst is over,” the problem has not been resolved.

Risks to the international supply chain are increasing due to the situation in Ukraine and the re-emergence of the Corona pandemic.

In addition, negotiations on the revision of the North American West Coast Labor Agreement, which expires on July 1, are also coming up.

Looking at these factors, I do not see any factors that would cause ocean freight rates to decline.

At least for the full year of 2022, container freight rates are unlikely to change dramatically from their high levels.

The article concludes by saying that shippers need to accept the current freight rate levels as the new normal and look at the market dispassionately, rather than being concerned about short-term ups and downs in freight rates.

Recently, fares have softened and actually become easier to get space, but I think it is more reasonable to view this as a temporary situation.

Some of you listen to this radio station daily, and some for the first time, so I will repeat market conditions as they are important to you.

I hope you will continue to use this radio station to gather information.