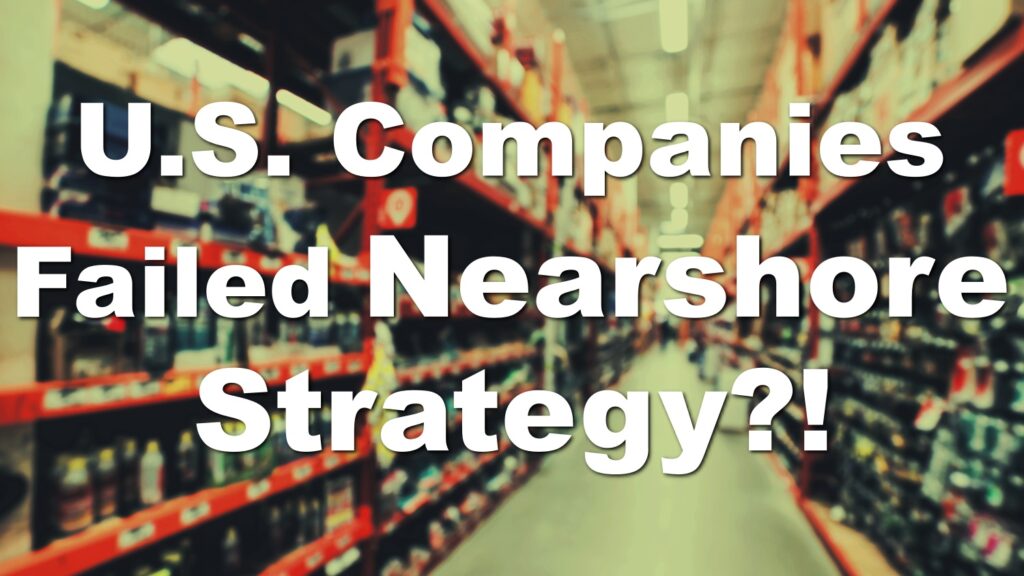 Today, I would like to talk about, “North American Companies Struggle to Move Production Locations Closer Together”.

With supply chains disrupted around the world, Western countries are trying to take a near-shore strategy where production bases are closer to their home countries rather than in Asia and Southeast Asia.

I have reported on this in previous radio and have included a link.

Experts say it may only bring production issues closer to home.

Because of supply chain disruptions, U.S. importers are considering shifting sourcing from the Asia-Pacific region to Mexico and then to Latin America.

However, finding suppliers in Mexico and Latin America like suppliers in China and Southeast Asia to source the right raw materials, production quality, and proprietary parts, and where already have established networks in manufacturing locations, is difficult.

Experts point out that it will take years to replicate current production capacity and reshape suppliers under a near-shore strategy.

One expert added, “There is no denying that China is the single largest market for nuts and bolts of all kinds, from basic to advanced components. Such an ecosystem is impossible to replicate in any other country in the world”.

However, they appear to be struggling to obtain materials, such as less expensive cotton and synthetic fibers, compared to fabrics produced on a large scale in China, Pakistan, and India, where they currently source.

The person in charge of the company said that in Latin America, “there is still no infrastructure to produce materials of the current Chinese, Indian, and other grades at lower costs.”

Furthermore, he continues, “As part of the development of near-shore and regional sourcing, we need to look at financial inputs and raw material availability.”

In places like China and India, costs are lower because of mass production, but in Latin America, there is not yet that much production. At present, quality is low and prices are high.

It seems that changing a supply chain that has been built up over many years will be a complex task, especially in terms of raw materials and the availability and transportation of components.

A consulting firm based in Mexico City says that over the past year it has seen “an amazing increase in the number of North American clients trying near-shore.”

In fact, inquiries seem to be increasing.

Mexico’s proximity to the U.S. and its existing manufacturing infrastructure and freight transportation network, which make it a target for new manufacturing locations.

A recent survey of U.S. manufacturing executives was conducted by that Mexican consulting firm.

While 70% were planning, considering, or expecting to move their manufacturing facilities to Mexico, only 17% had already done so.

A person from the company remarked, “Many companies are finding that certain equipment and parts cannot be made locally, as capacity in Mexico is tight and, moreover, expensive molds for plastic products must be imported from China.”

Mexico’s production capacity is not yet high and may soon be tight. Furthermore, the technology is not yet as high as in China, and some parts cannot be made.

One North American manufacturer stated that Mexico is “not an option.”

It may take years to replicate the supplier networks and raw material availability found in Asian manufacturing centers, the article reports.

Quality in China is high enough today, but not so long ago.

A friend of mine who does online shopping said that there was a time when 70% of imports from China were defective.

But now things have changed, and the level of quality is gradually improving.

For example, in the electric vehicle industry, it seems that excellent human resources are being pulled out at unbeatable rates.

Basically, where there is money to be made, there will also be talented people, and the level of products will rise.

Mexico and Central and South America still have a long way to go, and investment may proceed in the future.

There is no immediate switch in production areas, but that is the way things are going now.

I do not know how the market will change in the future. However, I believe that these times are a kind of business opportunity, so it may be possible to attack Mexico.

I will keep updating this information.