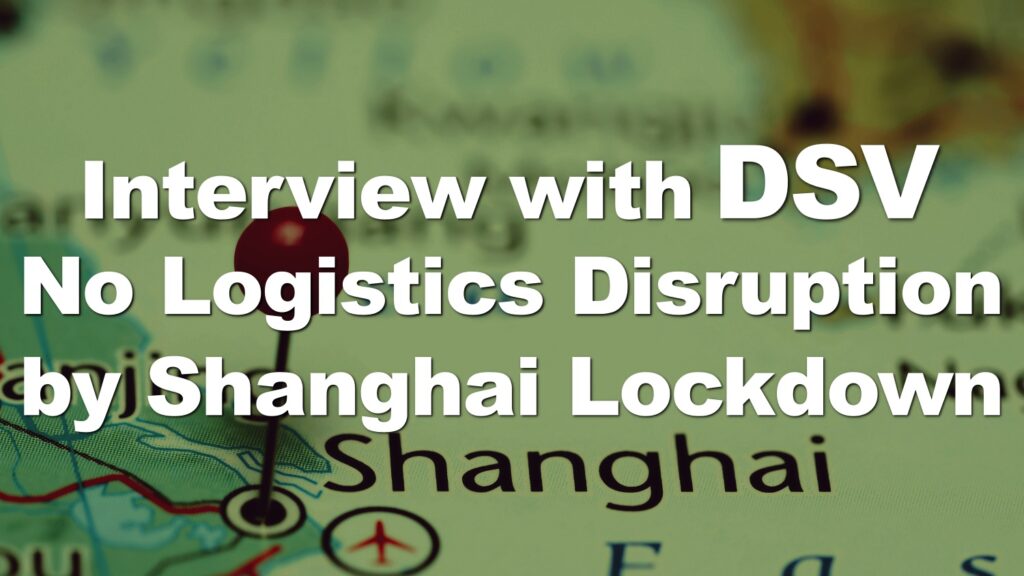 Today, I would like to talk about, “Logistics after the Shanghai Lockdown and the Future of the Forwarder Industry” in an interview with the CEO of DSV from an article on Joc.com.

Daily Logistics Radio by IINO san in 6th May 2022

The Impact of the Shanghai Lockdown

The CEO of Danish major company DSV ended the first quarter of the year describing the financial results as “Super Strong.”

In addition to that, DSV’s CEO stated that there would be no “major disruption” from the surge following the China lockdown.

If the lockdown is lifted in key manufacturing regions in China and plants resume production quickly, the expected surge in volumes will not cause major disruptions in the U.S. and Northern Europe, he said.

In an interview, DSV’s CEO also stated that “there will be a surge in volume because a lot of demand is building up for our employees in China.”

In addition to that, he said, “We don’t expect any major disruptions from the volumes coming into Europe and the U.S. a couple of months from now.”

I will explain about it another radio.

As for the status of Chinese export volumes in the wake of the Shanghai lockdown, “In recent weeks, exports from Shanghai are down 30-40%, and China as a whole is down about 15%,” the article states.

DSV’s CEO added, “However, we are not so negative about cargo volumes for the second half of the year, as global GDP growth is still expected to be 3 percent and cargo volumes have traditionally grown in line with global GDP.”

DSV’s results were strong, with first-quarter revenues up 77% year over year to $8.6 billion and pre-tax income doubling to just under $1 billion, which is equivalent to full-year 2019 pre-tax income results.

Because of lower freight rates before Corona, the company seems to have caught up with its full-year results in the quarter.

Information from other shipping companies also indicated that freight rates would soften for the full year.

DSV has made some major acquisitions in the past few years, but CEO said that continued profitability will not be allocated purely to large acquisitions.

However, the article reports that, “the company is not in a rush to acquire, but is more focused than ever on participating in the consolidation of this fragmented industry,” meaning it is leaving the door wide open for acquisitions.

Acquisitions Continue in the Forwarder Industry

The direction of the forwarder industry seems to be gradual consolidation.

In the forwarder industry, I believe that companies with assets are strong.

Non-asset companies need to have considerable purchasing power or be in the upper echelon of the industry, ahead of the major players, in order to survive.

However, I believe that small and medium-sized companies in such positions will receive acquisition offers from the major players, and I have a feeling that they will gradually consolidate.