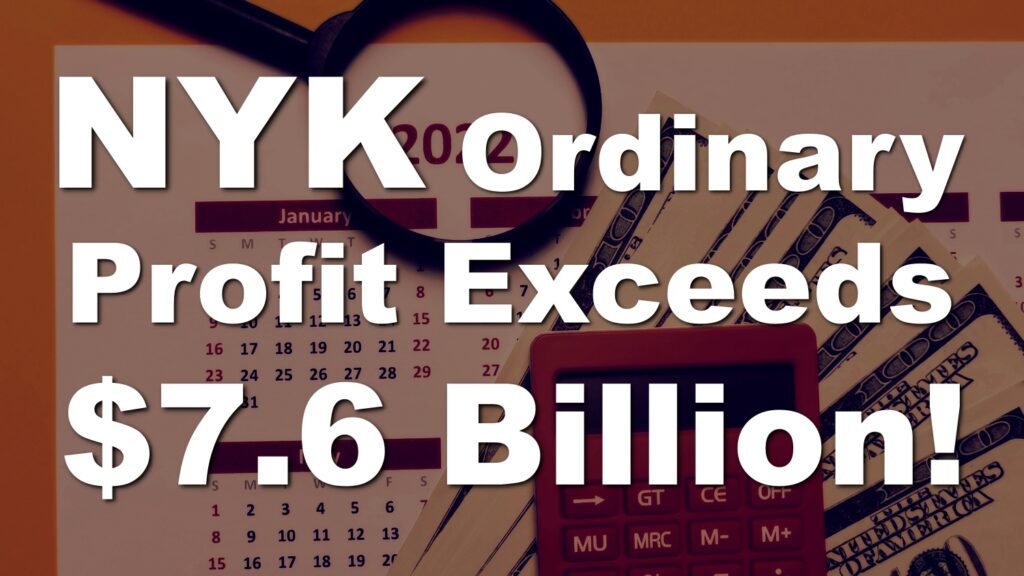 Daily Logistics Radio by IINO san in 10th May 2022

The financial results for the previous fiscal year of the three major shipping companies are now available.

Against the backdrop of unprecedented container freight rate hikes, consolidated recurring profit for NYK reached the $7.7 billion, which is 4.7 times that of the previous year, for the highest record for a Japanese carrier.

On the other hand, all three companies are forecasting a 20-30% decrease in recurring profit this fiscal year compared to the previous year.

They also anticipate a gradual convergence of the Corona pandemic and a certain easing of the supply-demand balance for containerships in the wake of the global economic slowdown.

Financials have also improved significantly, with NYK’s equity ratio at 56% as of the end of March, up significantly from 29% in the previous fiscal year.

Where to Invest in Shipping Companies

It will be interesting to see what they invest in from here.

I think decarbonization, zero emissions, toward 2050 is the default.

In addition, the logistics industry is a bit behind in digitalization, so they would invest in that as well.

I also feel that it is human resources.

I personally hope that labor costs will rise in the shipping industry and more talented and younger people will want to work in the industry.

Before Corona, the shipping companies had a difficult time managing their business, but all of them made big profits this time.

So, I am hoping that the industry may be able to move forward quickly here.

Expected Profit for this Fiscal Year

Regarding demand in North America, NYK expects recurring profit for this fiscal year to decrease by 24% from the previous year to $5.8 billion.

The article reports that although demand in North America will settle down due to the global economic slowdown in the second half of the year and beyond, profits will continue to be higher than before the Corona pandemic.

This year, there are negotiations for labor agreements at North American West Coast ports, and cargo is expected to be held up due to workers’ strikes.

Demand is Expected to Settle Down?

20-30% decrease in recurring profit means that demand is expected to settle down in the first place.

In yesterday’s radio, I reported that freight rates for Service Contract for major shippers were fixed at 2 or 3 times last year’s rates.

This means that they can now call at ports in Japan without losing out on buying space from China, and cargo can be loaded on the space at the confirmed higher freight rates.

Last year, we had no space from Japan and could not send the cargo even if we wanted to, but they hit record profits.

This year, we have space available for shipments from Japan and can sell them at high freight rates, but profits would be down, which means that demand will drop considerably.

Refraining from Buying in North America

0.5% interest rate hike was recently decided by the Fed. The latest mortgage rate, 30-year fixed, has risen to 5.3%.

Demand is also extremely high with 1.9 jobs per unemployed person.

Some believe that a 0.5% rate hike or two is likely in the coming meetings.

In extreme cases, since there is no cargo, profits will decrease regardless of whether the West Coast ports are on strike or not.

How Far will Freight Demand Drop?

However, I personally think that a 20-30% decrease in revenue, even with 2 or 3 times higher freight rates fixed and space to carry, is an expectation that the volume of cargo will be cut in half.

Please let me know if anyone from the shipping companies is listening.

I look forward to your direct mailings on Twitter and elsewhere.

I will talk about the Wall Street Journal article on labor negotiations at West Coast ports and discuss it some more on tomorrow’s radio.