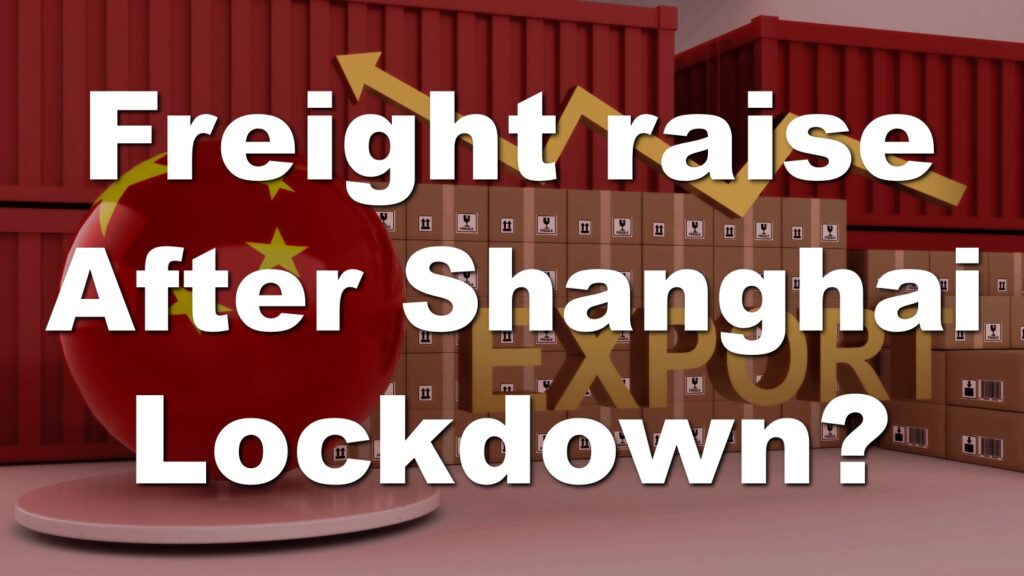 Today, I would like to talk about, “Container Freight Rates from Shanghai Rebound as Lockdown Lifted?”

Daily Logistics Radio by IINO san in 17th May 2022

Shanghai, China, announced on June 16 that it will normalize activities for businesses and residents during the month of June.

Shanghai lockdown began at the end of March and has been in place for about two months.

As for current freight rate levels, according to the Shanghai Shipping Exchange, container freight rates, spot rates, from Shanghai to the west coast of North America as of the 13th were $7,900 per 40-foot container, up $12 from the previous week.

This is the first time since the end of April that prices have increased, albeit slightly.

Spot freight rates to the East Coast of North America were down slightly for the fourth consecutive week to $15,060 per 40-foot container.

However, the report said that there was only a slight decrease compared to early April for both coasts of North America.

While spot freight rates have put the brakes on their downward trend, another index, CCFI, China Containerized Freight Index, is up 21 points from the previous week to 3,088 points.

Since CCFI includes not only short-term fares but also contractual fares, it may reflect the effect of price increases from the 2022 fare negotiations.

With the announcement of the lifting of the lockdown during June, it is likely that container freight rates will start to rise again in general from here.

There are reports that 50% of the production activities of companies in Shanghai have already resumed. However, it is said that it will take at least one month after the lockdown is lifted for full transportation demand to recover.

For example, there are problems such as the need to return workers from the countryside to Shanghai, which does not mean that production can immediately resume at full capacity.

Also, the terminal needs to be unclogged because of the cargo backlog.

I received a comment yesterday that cargo sent from Japan to Shanghai has been ship back to Japan.

At the end of the article, it is pointed out that, if the lifting of the ban were to take place in early June, cargo movements would pick up in July, causing disruption due to tight supply and demand once again.

Since the peak season for shipments to North America is generally from July to September, Shanghai may normalize at that time and be in full operation.

Since the Port of Shanghai is the world’s largest container handling port, logistics would be greatly disrupted if it were to suddenly go into full operation.

Furthermore, as I have been reporting daily, there are labor negotiations and strikes on the West Coast of North America.

Spot freight rates are likely to soar, vessels headed to North America will be waiting offshore, and space is likely to run out again.

As a practitioner, I realize that we are facing difficult times.

I will keep you informed.