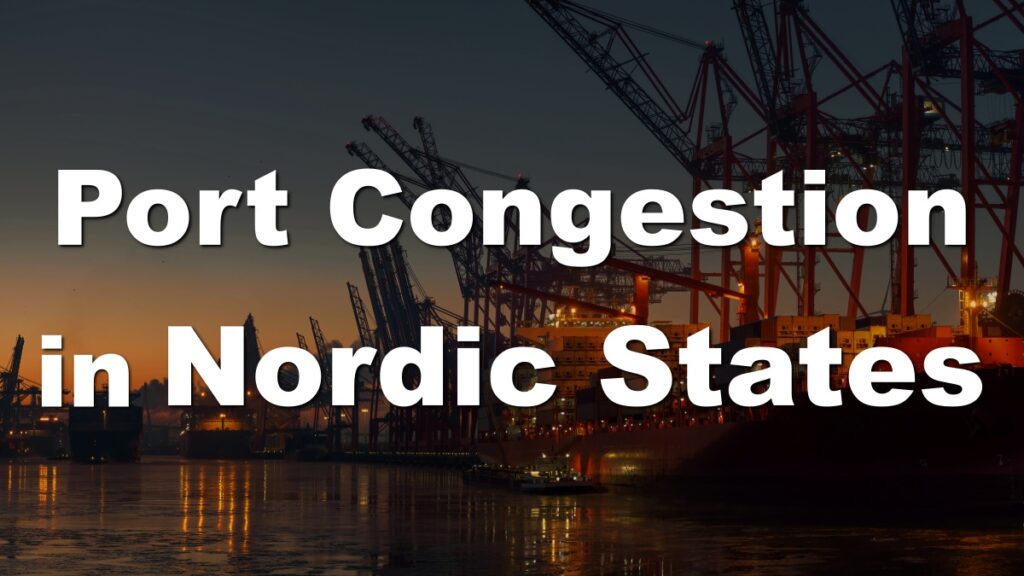 Today, I would like to talk about, “Nordic port congestion worsens despite easing of goods volumes.”

Daily Logistics Radio by IINO san in 31st May 2022

According to shipping research firm Alphaliner, the average round-trip voyage between Asia and Northern Europe is 101 days, resulting in significant delays.

The slowdown in import volumes to Northern Europe has done little to ease congestion at European regional hub ports.

DHL’s Global Head of Ocean says that the deterioration of port flows in Europe is primarily due to longer container dwell times at the terminals rather than increased physical volumes.

In fact, it has little to do with demand and more to do with congestion in the ports and inefficient unloading of vessels.

European warehouses are full, and although cargo volumes are not high, labor shortages are causing clogging.

In the United States, the number of retirements among logistics workers rose dramatically in 2021.

It is called the Great Resignation, and partly due to the Corona, workers in the field were paid less and were so busy that they had to retire in droves.

Commenting on the shortage of workers in one European country, the article said, “Certainly, there are many reasons for the current labor shortage.”

The article goes on to report, “People are still afraid of the new coronavirus and want to put an end to overworked, low-paying jobs. And wages are too low.”

A recent study by economists at universities in the U.S., Germany, and the U.K. showed that low-wage workers in Germany underestimate the wage levels of jobs elsewhere.

I don’t know if those working in the German supply chain are paid low wages.

However, according to the article, many workers who had previously been lured into low-wage jobs are now realizing that there may be other jobs they could do.

Something similar to the U.S. may be occurring.

The spokesperson continued, “The situation in Europe may worsen as inland capacity is limited and inland warehouses are fully utilized, slowing the pickup of loaded import containers.”

Declines Cargo from Asia to Europe

Let us now take a look at container handling volumes.

According to CTS, Container Trade Statistics data, cargo volume from Northeast Asia, China, and Southeast Asia to Northern Europe was 1.3 million TEU in March, down 5% from the previous year.

Demand from Asia to Europe is on the decline.

The first quarter total was 4.0 million TEU, up 4.2% in January, while the January-March combined total was up just 1%.

Short-term spot fares from Asia to Northern Europe have fallen 30% since January 1 to $5,939 per TEU.

The difference between spot rates and long-term rates has become much smaller.

The numbers show the slowdown in volumes on routes to Northern Europe and the strategy of European shippers to lock in long-term freight rates to avoid unstable short-term rates.

Freight rates are calm at the moment, but the key point is what will happen depending on the situation.

In any case, schedules are being delayed and occurred congestion due to shortages of workers.

The ocean freight manager for a European-based forwarder says his customers are experiencing delays of up to three weeks at most of the major Nordic ports.

He said, “The situation at Nordic ports has been tense for the past few weeks, and it’s not getting any better.”

Maersk’s head of ocean customer logistics in Europe said that “some of our Nordic terminals are ‘operationally challenging’ but we believe we have reached the peak point of disruption.”

At this time, the company does not expect the impact to worsen.

Impact on the World

However, I do not think that the problem of labor shortages will be solved so quickly.

Demand is currently calming down, but what will happen when demand revives?

In logistics, a congestion problem in one place will lead to one overall.

A problem in one place can affect the entire world, so I think we must keep a close eye on the future problems in Europe as well.