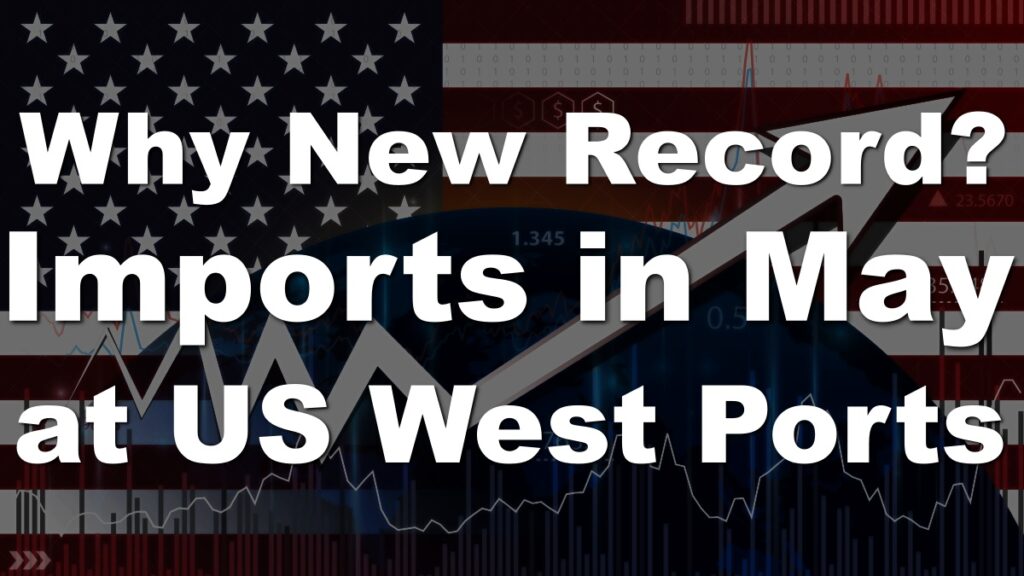 Today, I would like to talk about, “Asian Imports Surge in U.S. West Coast, Hit Unexpected Record High in May.”

Imports from Asia to the U.S. West Coast set a new monthly record in May.

It shows that goods are entering the U.S. at a historic pace despite more than two months of lockdown in Shanghai and rising inflation in the United States.

I broadcasted radio on May 20 that reported that congestion on the East Coast is at an all-time high, so please listen to that if you wish.

Congestion on the East Coast is driving freight back to the West Coast.

Freight to the East Coast has been declining.

Meanwhile, imports from Asia to the West Coast totaled about 1.74 million TEU in May, up 5.7% from a year earlier.

This is a significant 25.1% increase compared to May 2019 before the Corona.

Concentration in LA and LB port

The surge in West Coast imports has concentrated almost exclusively in Los Angeles and Long Beach.

Asian imports to Seattle and Tacoma on the northern West Coast fell 11.5% in May, while Oakland’s Asian imports rose only 1%.

Limits to Diversion to the East Coast

U.S. retailers, concerned about disruption from the ongoing labor-management bargaining strike at West Coast ports, have tried to shift cargo to the East Coast.

However, there are limits to how much cargo can be diverted to the East Coast, according to an article by a consultant for an import company.

The article concludes with the importer’s consultant informing, “In the past, importers could shift all the cargo they wanted, but now there are limits.”

During the last strike in 2014, cargoes were attracted to the East Coast, avoiding the West Coast, but I did not hear much information about any clogging at East Coast.

The current situation is that cargo is eventually returning to the West Coast due to limited throughput on the East Coast.

Since the East Coast is also congested, the May data represented that the West Coast may well be clogged in the future.

In addition, because of the lockdown in Shanghai, the April cargoes headed to North America via other ports.

Therefore, they were delayed and became imports in May, which may be another reason for the increase.

I also personally believe that retailers are building up their inventories early.

Right now, space is rather easy to get to North America, and the number of off-shore vessels on the west side has also been reduced to about 20 or so vessels.

It will be interesting to see what happens with this in the future.