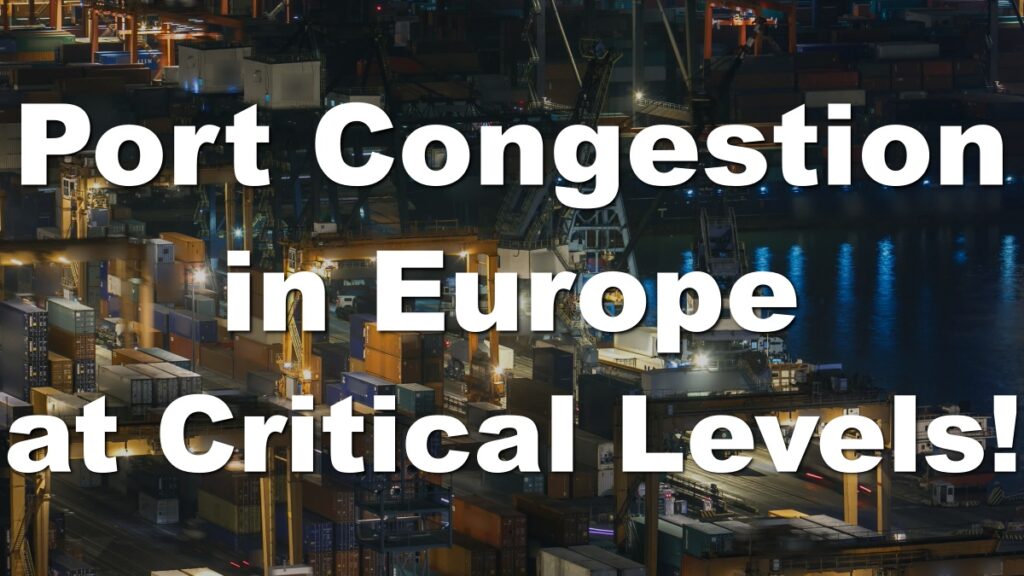 Today, I would like to talk about, “European Port Congestion at Crisis Level.”

According to intermodal operator Contargo, congestion has reached crisis levels at several Nordic hub ports, with congestion extending from the terminals to inland areas.

Maersk responded to this situation by stating that it is caused by a number of external factors, mainly terminal congestion.

And it will adjust 17 departures on Asia-Europe routes between August and November due to significant delays caused by congestion.

In response to bottlenecks at the French ports of Le Havre and Fos-sur-Mer, Hapag-Lloyd has imposed a $26 congestion surcharge on all import and export truck movements since July 1 to encourage timely pickup and discharge of containers.

An integral part of the European import supply chain is the intermodal service that brings containers together at inland terminals and delivers them to their final destinations via road, rail, and waterways.

Contargo noted in last weekend’s Market Update that “seaport terminals are full and only accepting containers in very narrow timeframes.”

A growing shortage of drivers and empty containers is causing additional delays.

Average wait times at Rotterdam and Antwerp improved in June compared to May, but are still well above pre-corona pandemic levels.

Last week, waiting times were 56 hours in Rotterdam and 51 hours in Antwerp.

Container imports into Northern Europe and the Mediterranean from January through April of this year fell 4% year over year to 4.16 million TEU, according to the latest data from CTS, Container Trade Statistics.

Analysts warn that demand is set to decline further, as soaring energy and food prices lead to inflation and a cost-of-living crisis that is hurting the European economy.

But while Europe’s recession gains momentum, it appears to have done little to ease congestion at hub ports.

According to Sea-Intelligence analysts, the main reason for terminal congestion is low schedule reliability.

In May, on-time reliability between Asia and Northern Europe was 25.7 percent, meaning that only one in four vessels arrived within one day of schedule.

Schedule reliability for the Northern Europe trade averaged 18 percent in the first five months of 2022, compared to 27 percent last year.

Substantial Increase in the Number of Port Calls

Adding to this schedule disruption is the increase in call size— the volume of containers moving on and off a ship during a single port call.

Nordic ports have seen a significant increase in the number of port calls this year, increasing the volume of vessels arriving at the ports, and this has placed a significant strain on terminal throughput.

A variety of factors are causing congestion at the ports, and we expect further disruption in the coming Christmas shopping season.

I will continue to monitor the situation in Europe.