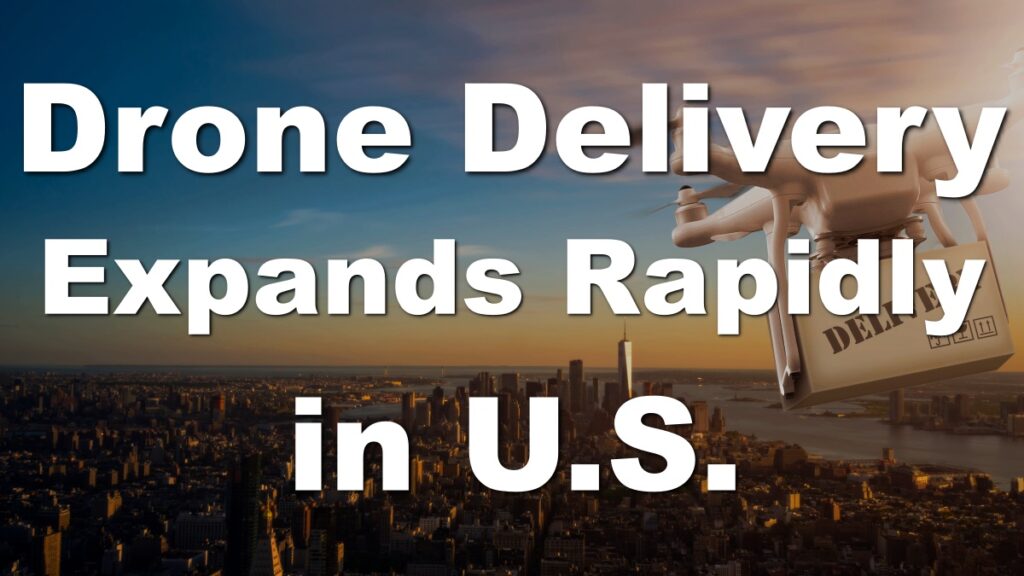 Today, I would like to talk about, “Drone Delivery Expands Rapidly in the U.S.! Competing for the Last Mile Market.”

Drone-based food and medicine delivery services are spreading rapidly in the United States.

Retail giant Wal-Mart has partnered with upstart company DroneUp, and plans to deliver to 4 million households in six states by the end of the year.

Amazon, the largest Internet retailer, is also offering the service one after another.

The battle for the “last mile” market, where products are delivered to consumers’ doorsteps, is heating up.

The four main U.S. drone delivery companies mentioned in the article are;

DroneUp delivers groceries, diapers, medicines, and other items from the store to the consumer’s doorstep in an average of 22 minutes from the time the order is placed online.

For a one-time delivery fee of $3.99, customers can shop from tens of thousands of items up to a total weight of about 4.5 kilograms.

As drone delivery becomes more widespread, it is expected to improve the chronic shortage of labor that the logistics industry faces.

They are also moving forward with the use of robots for loading packages, and are working to reduce delivery time to 15 minutes by the end of this year.

Currently, operators are stationed to monitor safety and take manual control in case of emergencies, but it is believed that “unmanned operation within five years is possible.”

The company is also looking to expand the service to entire metropolitan areas after 2023.

I think this is a growing field in Japan, too, because of the 2024 problem of driver work style reform.

Considering safety as well, the service should be introduced first in rural areas, and as drones become more widespread, traffic congestion will be eased and CO2 emissions will be reduced.

Wing revealed that it made over 50,000 drone deliveries in the first three months of 2022, tripling the number of deliveries made in the same period last year.

As of March, the company had made a total of 200,000 drone deliveries worldwide, mainly in Australia and Finland.

Drone deliveries are increasing where there is large land.

Zipline has flown 300,000 times in Africa, and residents in the delivery area can receive their goods in as little as 15 minutes after ordering.

In April 2022, Zipline entered Japan and began delivering medical supplies in the Goto Islands of Nagasaki Prefecture together with Toyota Tsusho Corporation.

Drone delivery is a growing market.

Business Research Company, a Western research firm, predicts that the global drone delivery market will expand at an average annual rate of 49%, reaching $8.23 billion by 2025, about seven times the market size in 2020.

Amazon will begin home delivery service in California in late 2022 with a hexagonal-shaped drone with enhanced stability.

Measures are being taken to address the many flight restrictions and obstacles that can easily become bottlenecks in large, populated metropolitan areas.

Amazon is developing a system that can detect and automatically avoid other flying objects, people, pets, and obstacles without visual monitoring.

The service is scheduled to begin operating in Rockford, California in late 2022 as Amazon Prime Air.

As companies become more selective about their services, the article concludes, it will be a critical moment to see if they can capture consumer demand by improving efficiency and safety.

It is very convenient to order and have it delivered in 15 minutes.

The shortage of drivers is a problem that will surely confront both the U.S. and Japan.

Zipline and Toyota Tsusho are beginning to enter the market in Japan, and I believe that once safety and regulations are in place, it will become more prevalent.

I will continue to keep an eye on the technology side of things.