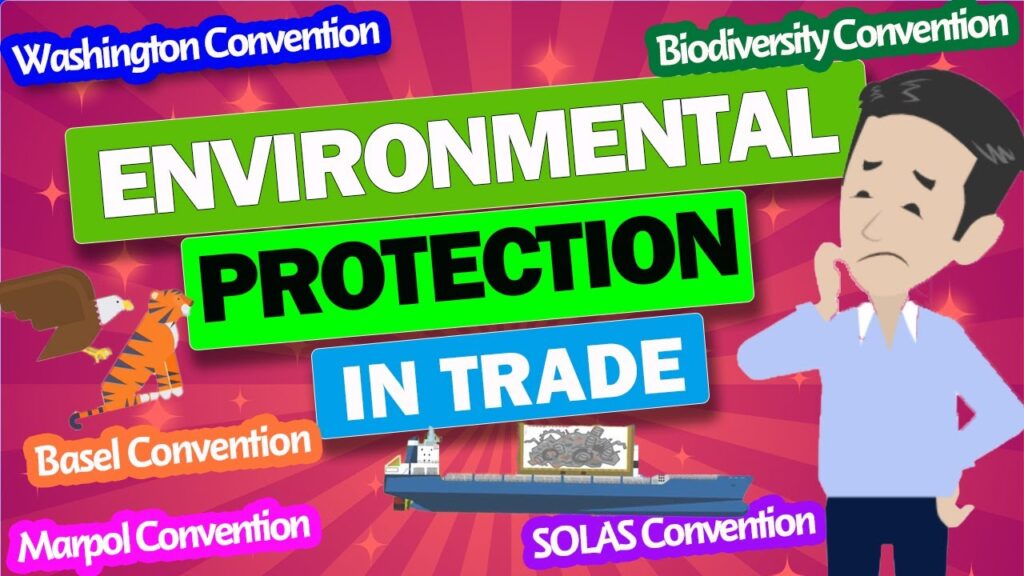 About “Environmental Protection in Trade” !! 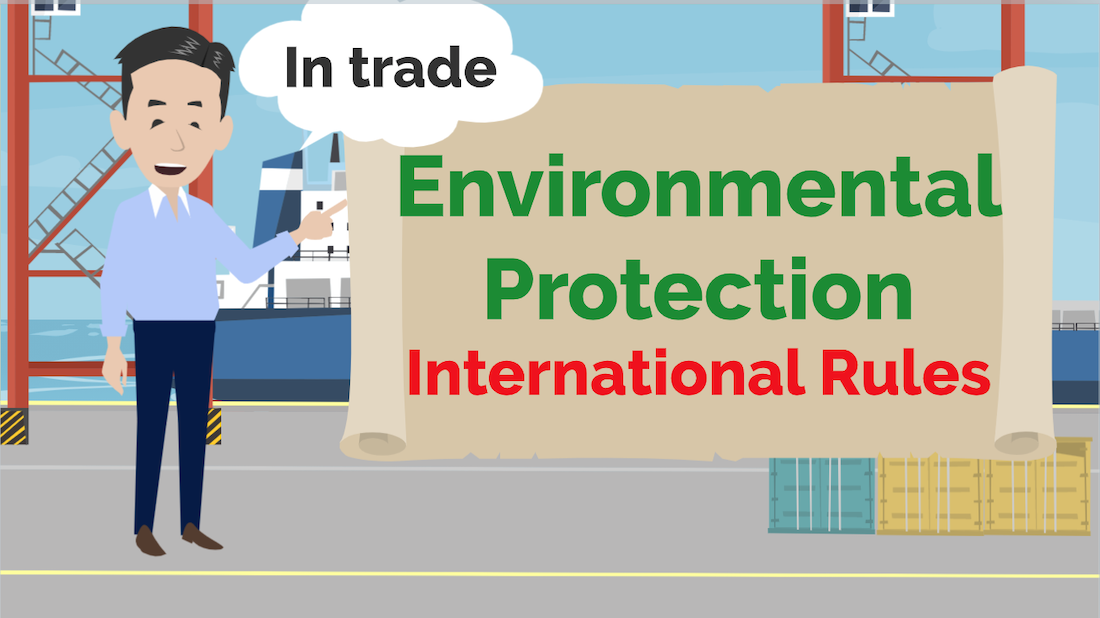 Hello. This is IINO.

Today I would like to talk about international rules for environmental protection in trade. 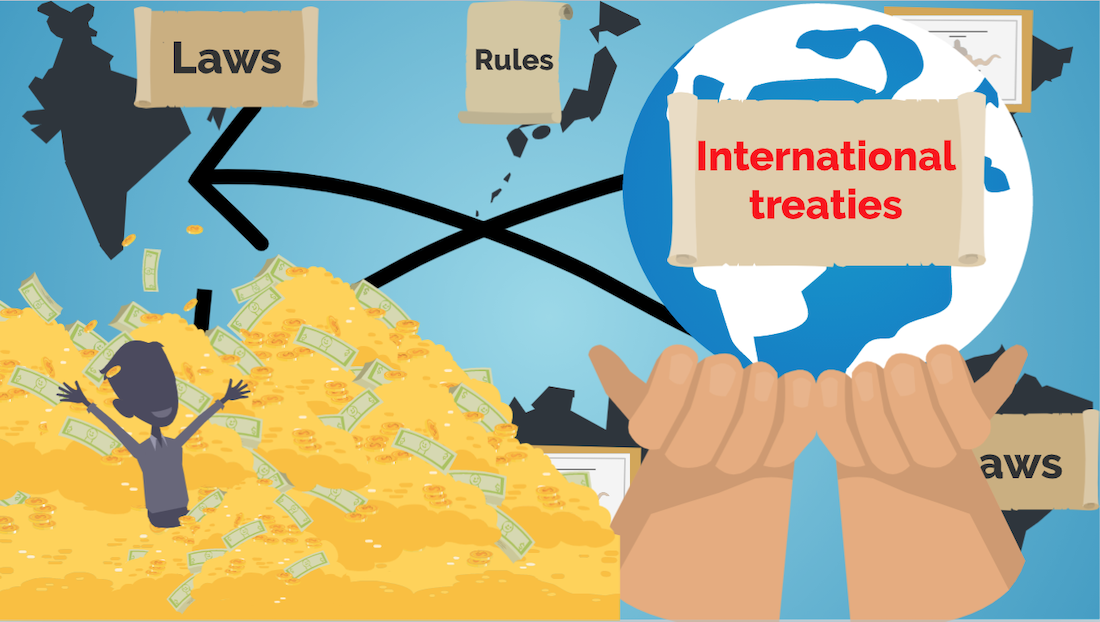 Trade is the process of doing business between countries who have different laws and rules. And there are international treaties on environmental protection must be observed for the trade.

Without such treaties, some companies will only pursue their profits without caring about destroying the earth’s ecosystem and environment.
Therefore, the environmental protection in trade is a topic that cannot be overlooked. 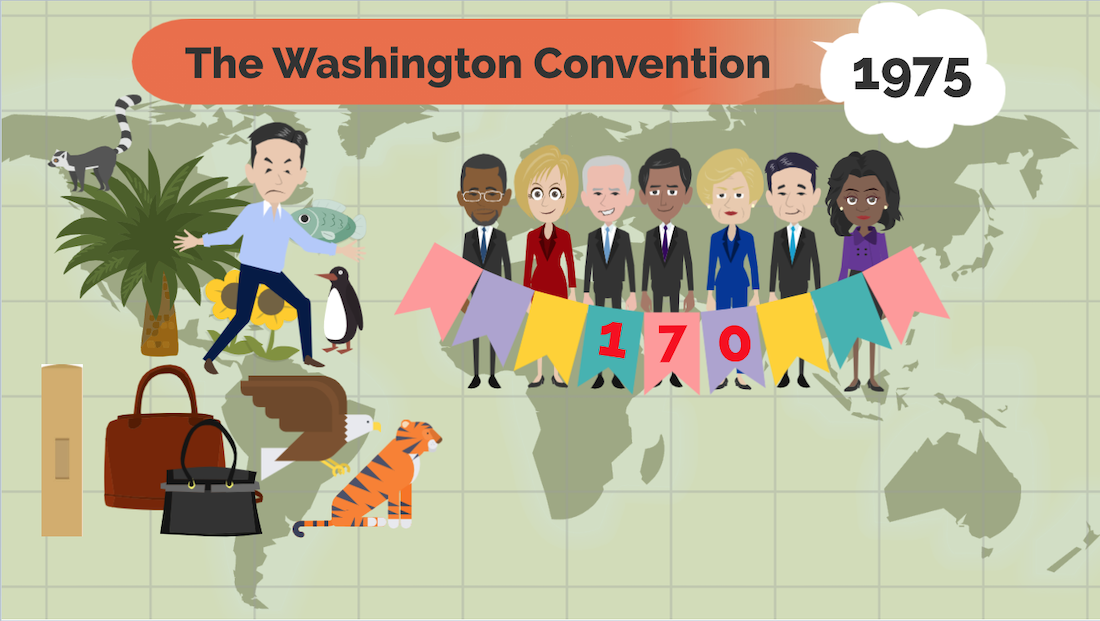 Let’s start with the Washington Convention.

The Washington Convention is an international treaty for the protection of endangered species, issued in 1975, and there are about 170 member countries in the world.

Familiar examples protected by this treaty include ivory stamps, leather goods such as crocodiles and snakes, and stuffed hawks and tigers. 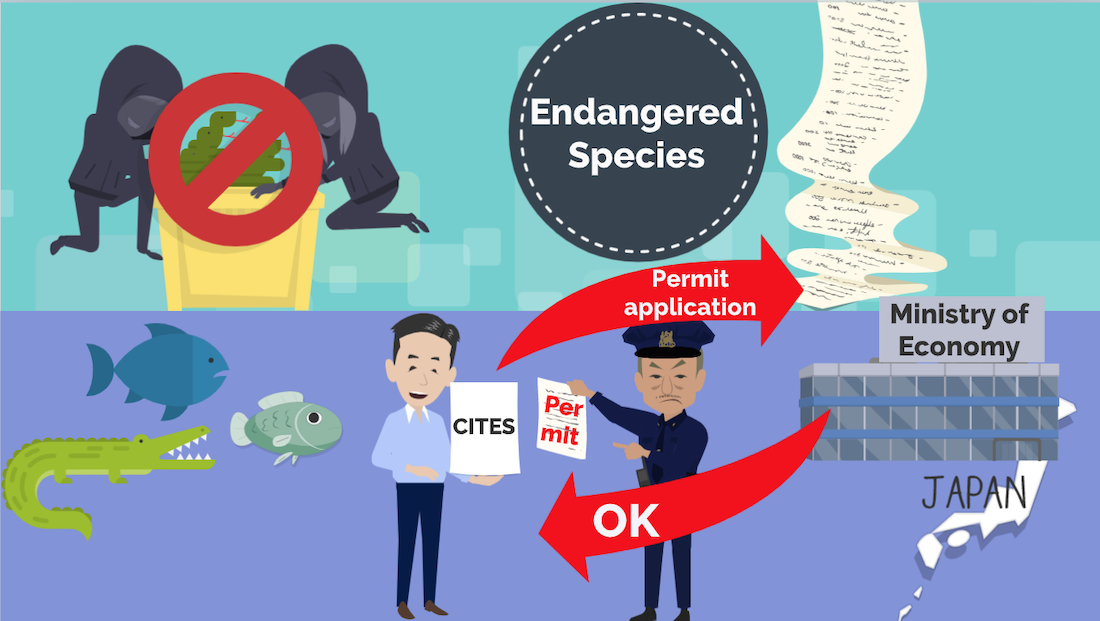 For preventing excessive trade for commercial purposes, it is listing species that are threatened with extinction, and regulating international trade depending on a degree.

Even if it is an economic animal that is farmed, it is necessary to apply for a permit in trade transactions. The exporting country issues a document called CITES, in case of Japan, you need to submit a permit application to the Ministry of Economy, Trade and Industry in advance, and once the permit is granted, the animal can be imported.

Applying for crocodile leather through CITES 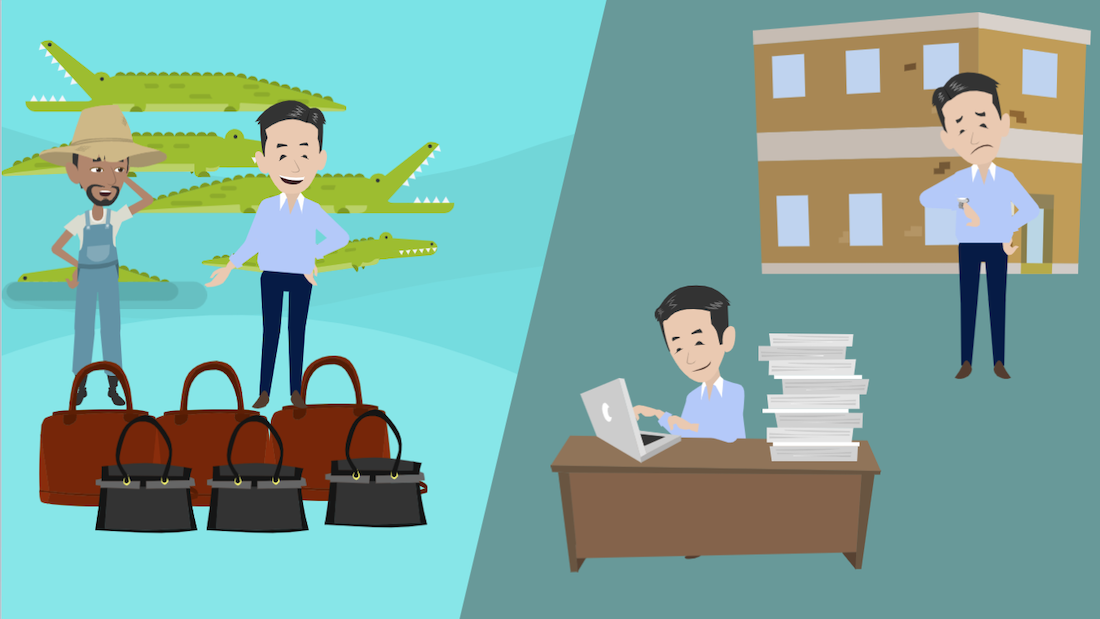 I used to be a trader of crocodile leather products when I was consulted by a trader in a province in Thailand, about the problem of too many farmed crocodiles.

Applying for the documents was not a problem as for a hassle once you get used to it. However, it was involved the government offices, so it did not always go according to schedule. 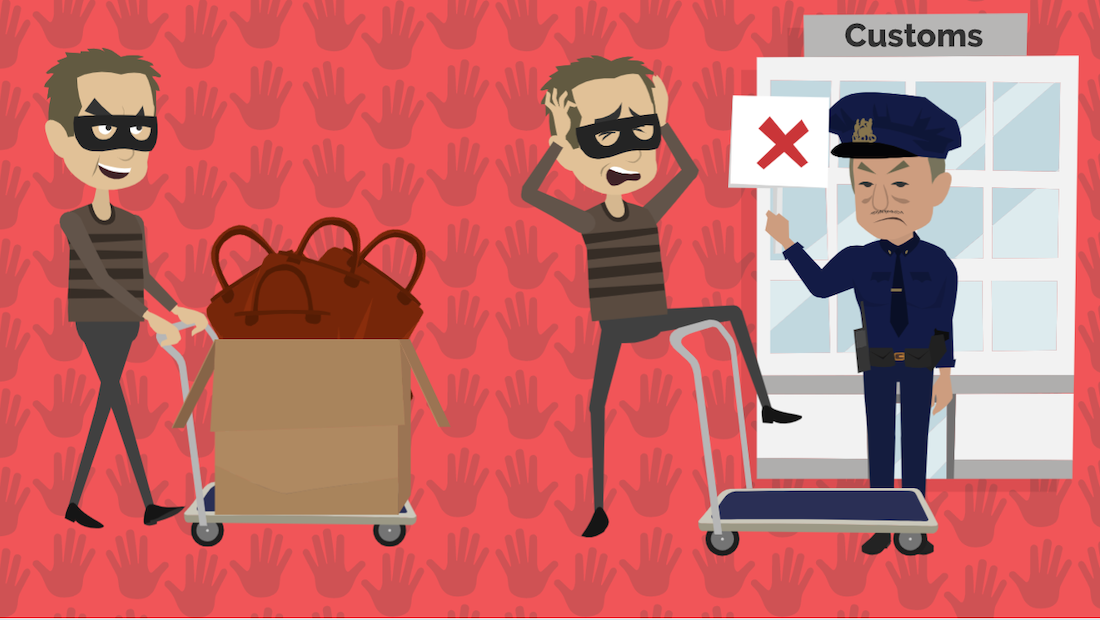 There were quite a few competing sole proprietors who import without following the proper procedures, so there may have been cases, where customs confiscated expensive crocodile leather products. 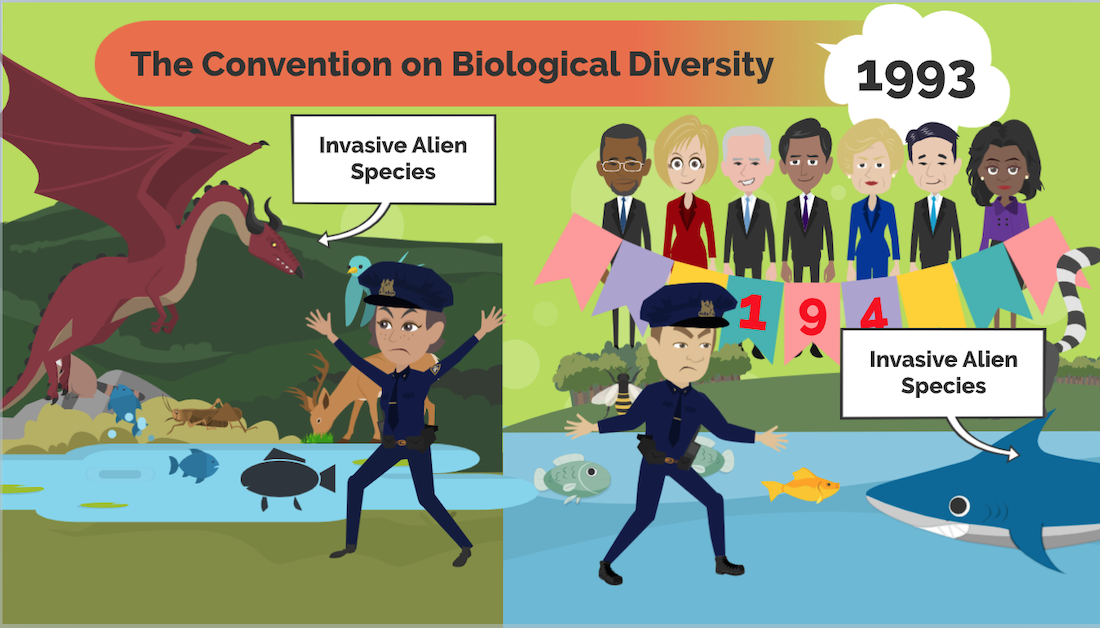 The Convention on Biological Diversity is also important to remember.

While the Washington Convention aims to protect endangered species, the Convention on Biological Diversity (CBD), issued in 1993 and signed by about 194 countries and regions worldwide. And it aims to conserve biological diversity and promote the sustainable use of biological resources.

Preventing the invasion of non-native species is essential for the conservation of biological diversity. In Japan, the Invasive Alien Species Act designates organisms that may cause damage as specified invasive alien species, and regulates their breeding, cultivation, and importation.

Effects of the non-native bluegill species 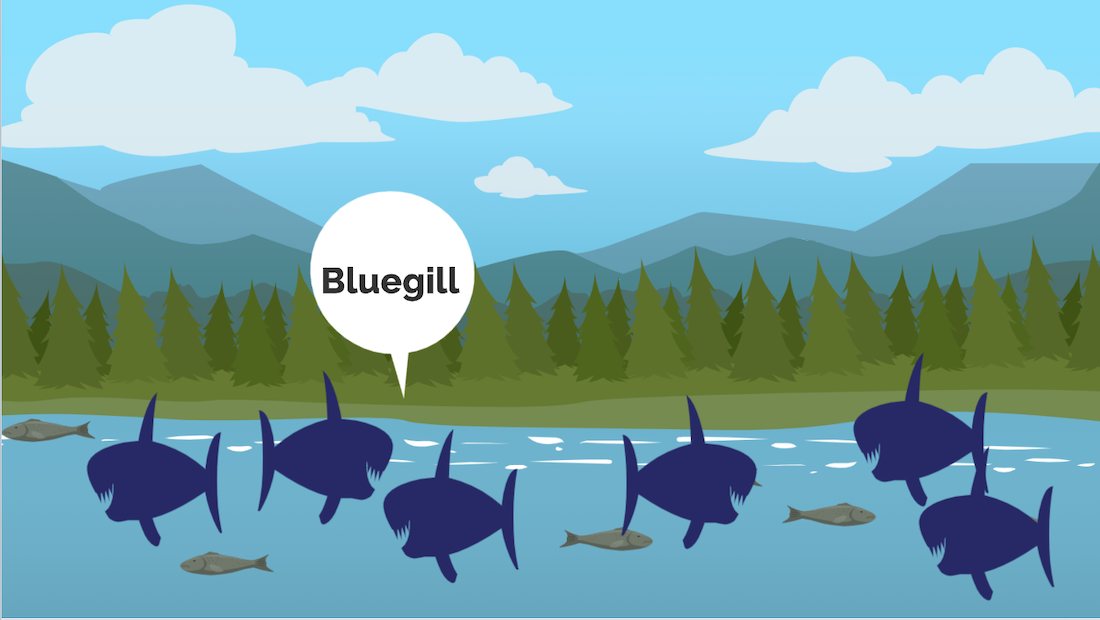 Bluegill is probably the most famous non-native species in Japan.

In Lake Biwa in Shiga Prefecture, there is a report that the rapid increase of bluegill has caused a drastic decrease in the number of eggs, fry and adults of a fish called Motsugo, 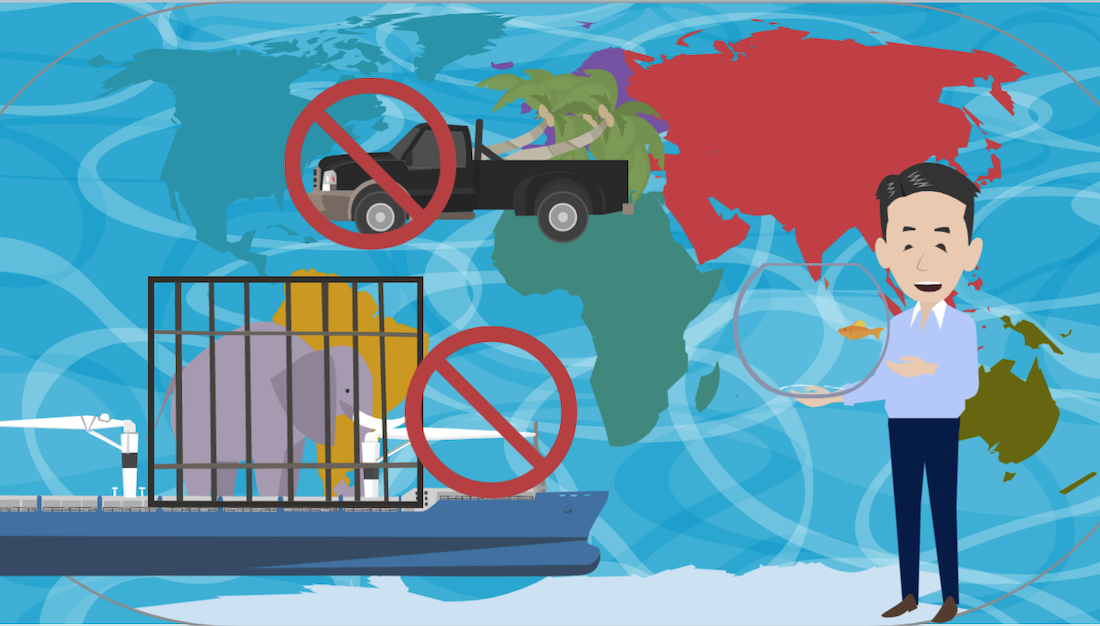 No species should be freely traded or imported from one country to another. Because non-native species may endanger the species in a particular region. 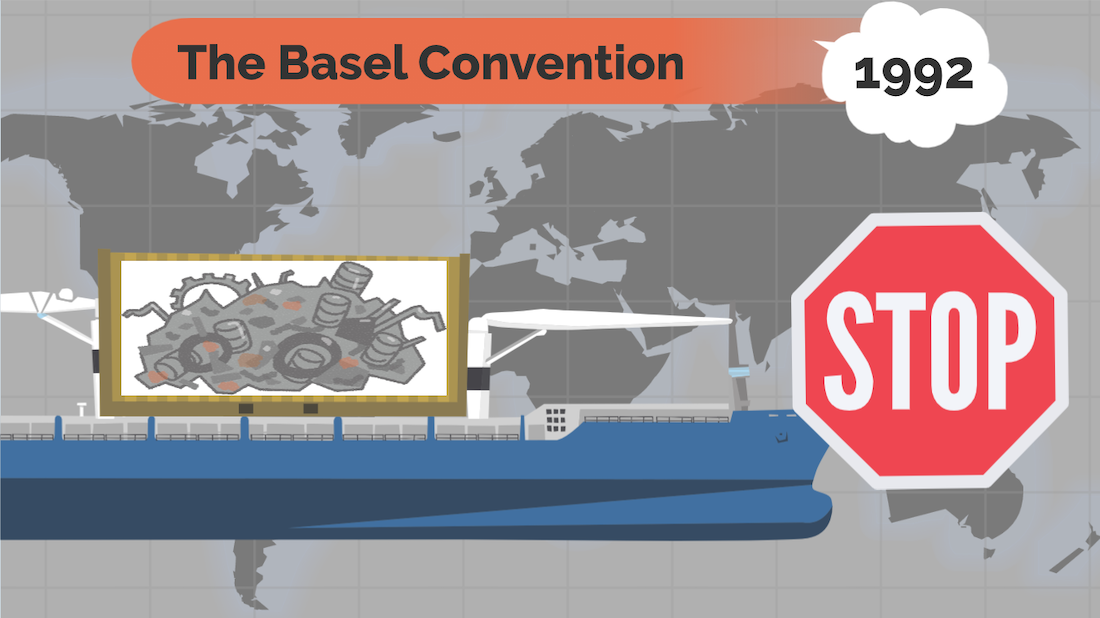 Then there is the Basel Convention.

The Basel Convention is on the Control of Transboundary Movements of Hazardous Wastes and their Disposal, issued in 1992. 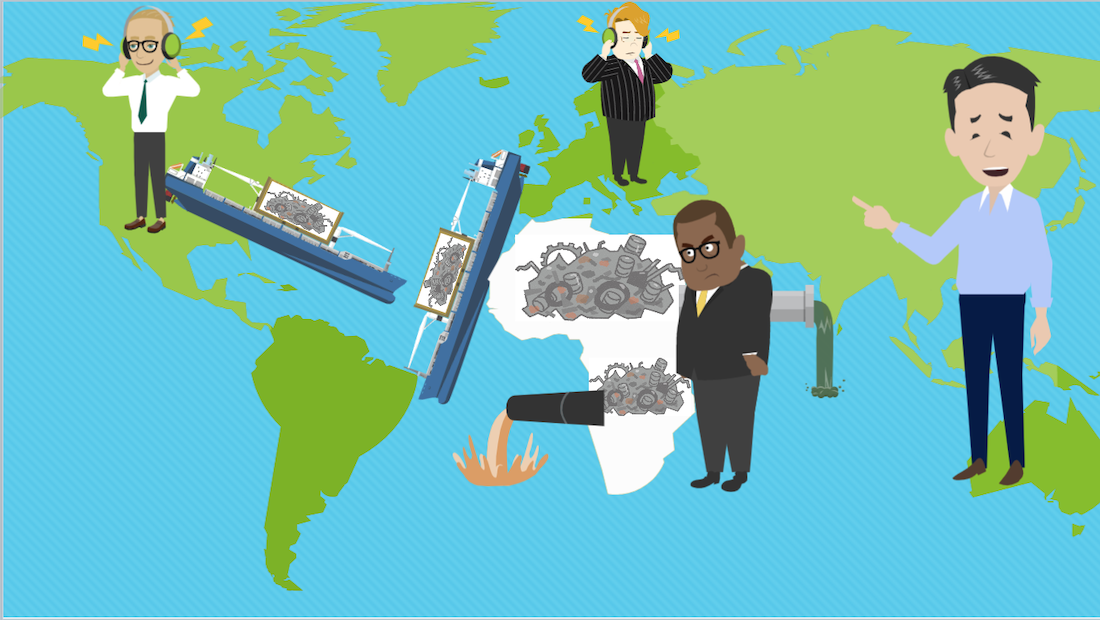 The background of this treaty is that in the 1980s, waste from developed countries such as Europe and the United States was left in developing countries in Africa, and it caused environmental pollution and other problems.

Hazardous wastes across borders without any prior communication or consultation, were moved and the responsibility was unclear, it is outrageous from the African country’s point of view. 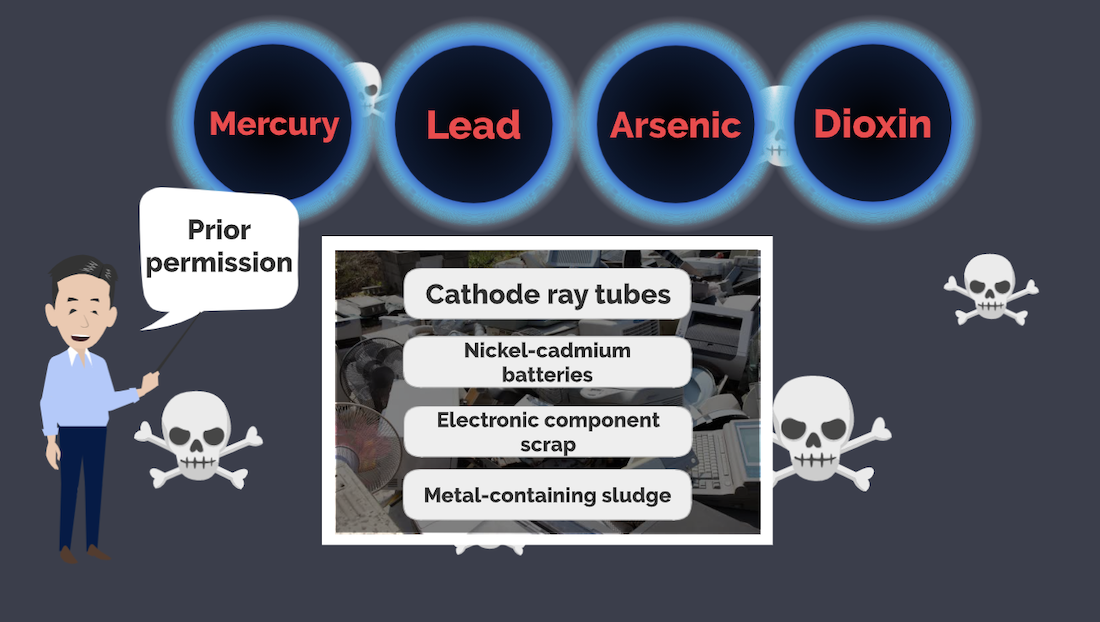 You also need to require prior permission from the relevant authorities for import and export. 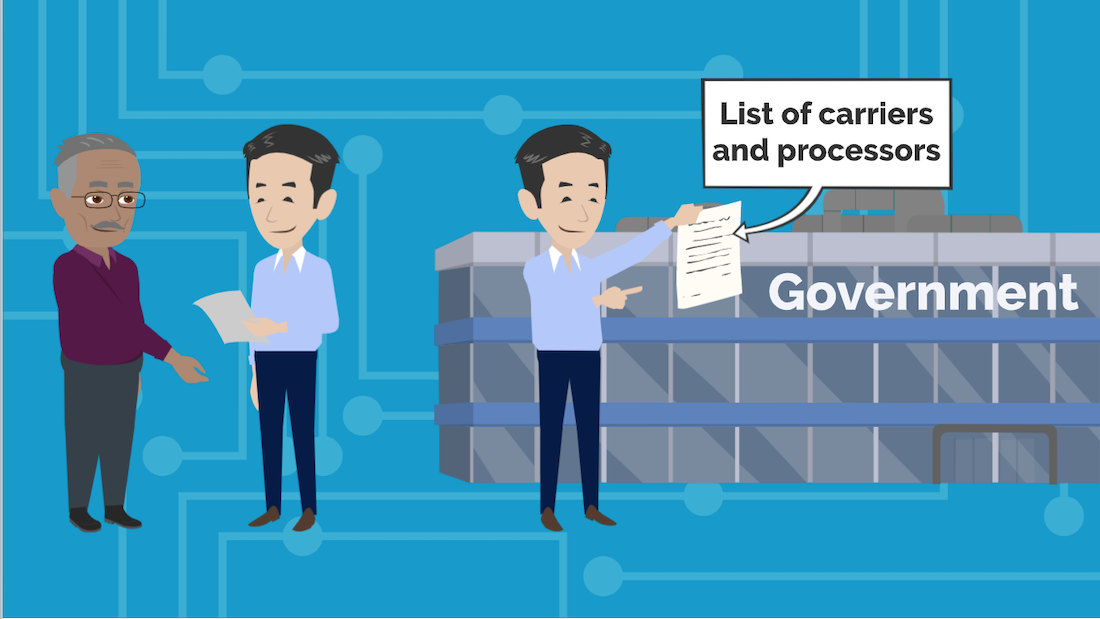 You need to obtain documents from the exporting side and apply for information, including a list of carriers and processors, to your government.

We can find the specific documents on the METI website, and links to easy-to-understand documents are provided in the Summary section. 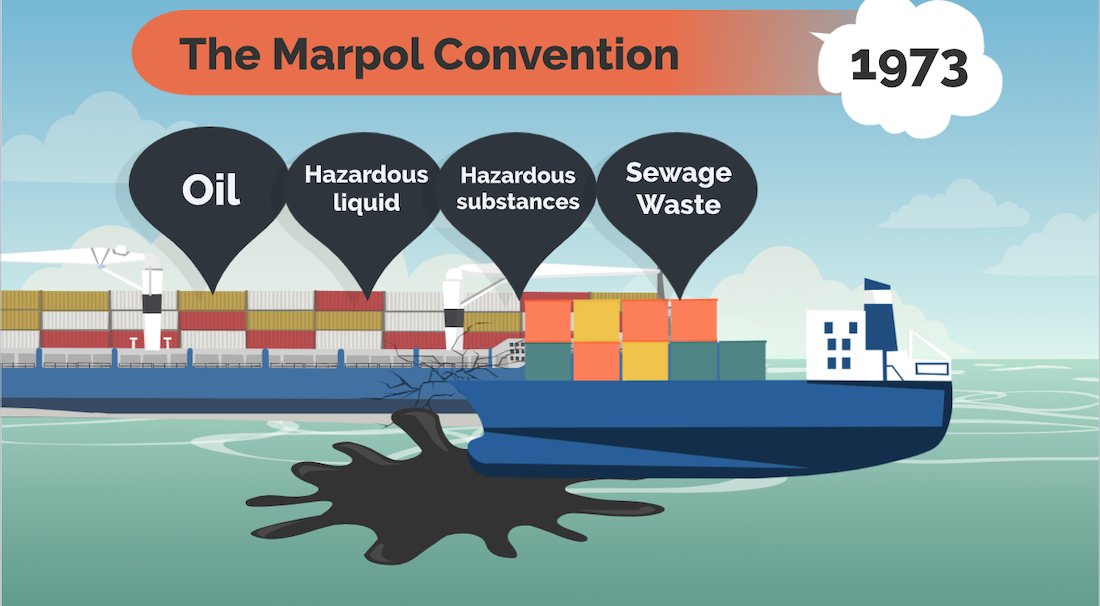 There is also an international treaty to prevent marine pollution. That is the Marpol Convention.

This treaty was adopted in 1973 to prevent marine pollution caused by ship operations and accidents, it regulates not only oil but also hazardous liquid substances carried in bulk, hazardous substances transported in packages, sewage, and waste. 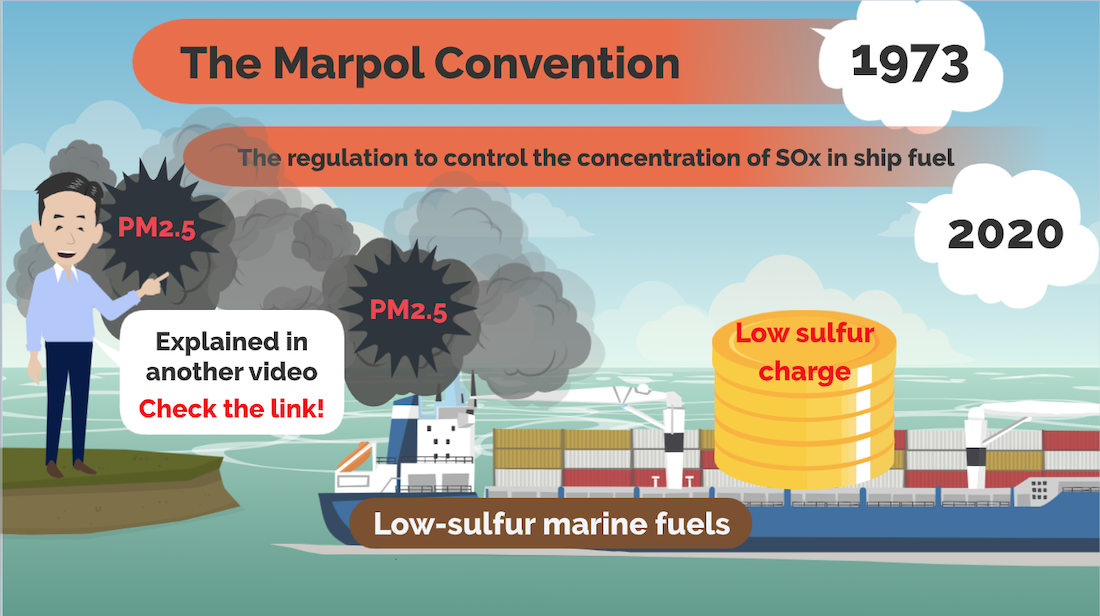 Within this convention, IMO revised the regulation to control the concentration of SOx (sulfur oxides) in ship fuel in 2020.

This is a countermeasure to the air pollution caused by PM2.5 and the damage to human health.

This regulation is designed to prevent PM2.5 emissions by using low-sulfur marine fuels, however it has led to a low sulfur charge in the shipping industry.

The low sulfur charge is explained in detail in another video linked here. 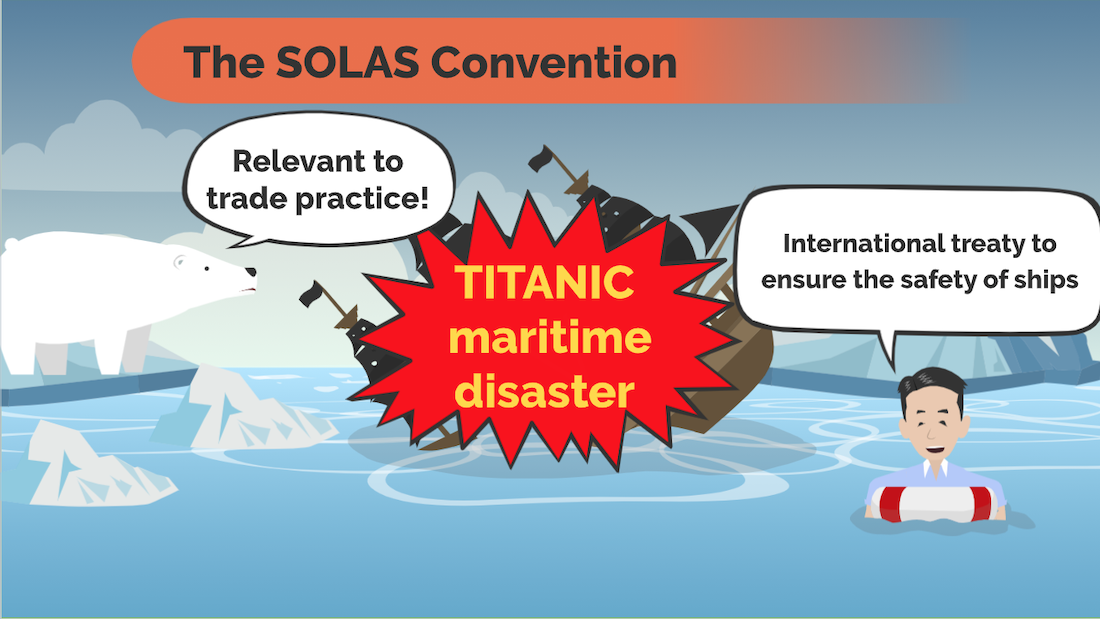 Finally, there is the SOLAS Convention, the Convention for the Safety of Life at Sea.

The SOLAS Convention is an international treaty to ensure the safety of ships, established in response to the Titanic maritime disaster of 1912. Although the theme is a bit far from environmental protection, I would like to explain it as relevant to trade practice. 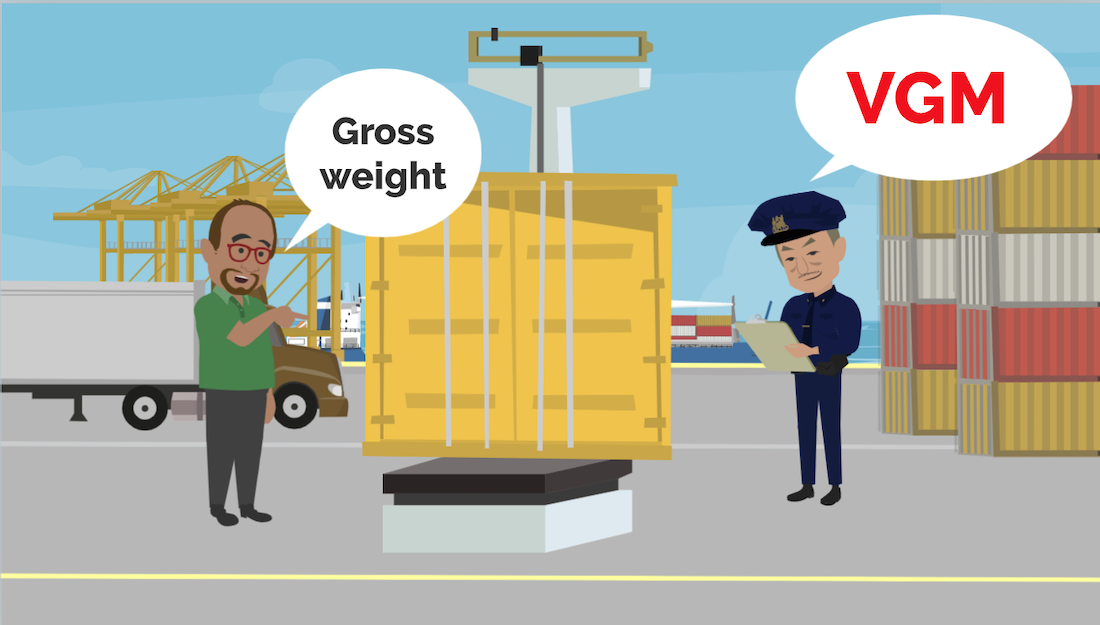 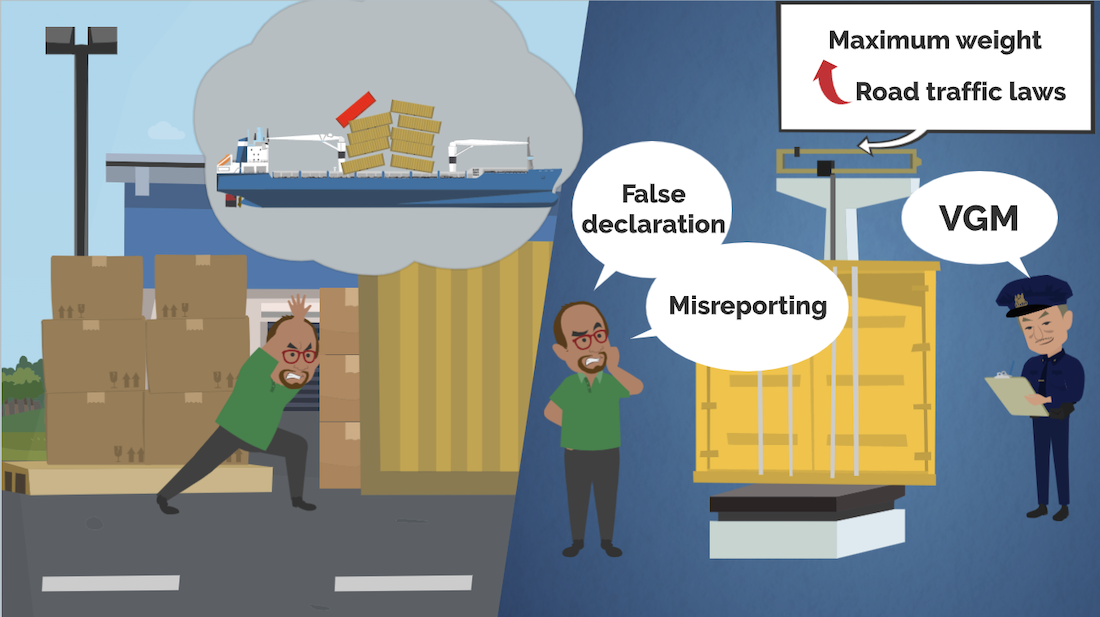 It is more efficient for a shipper to load a large number of cargoes into a container. The maximum weight of a container was determined by the road traffic laws of each country.
Still, accidents involving the collapse of containers have occurred due to false declaration of container weight, or misreporting of gross weight without knowing how to measure it correctly.

If a heavy container is placed in a high position on a ship. It will be unbalanced, and cause a collapse of cargo. Therefore, VGM was established and now, we have to submit the correct gross weight before the cutoff. 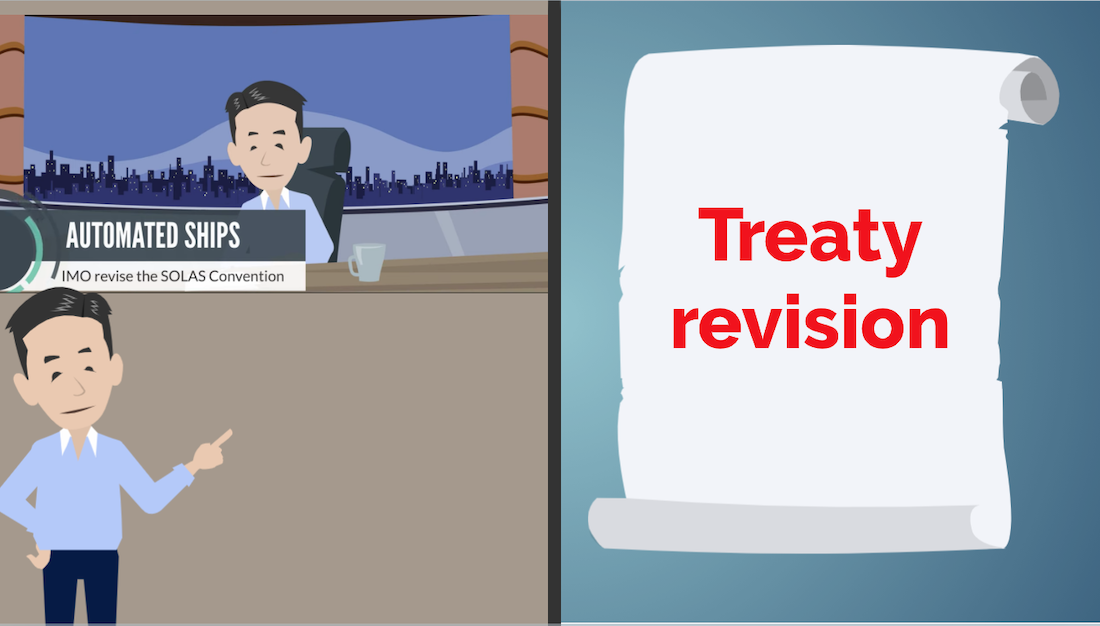 In our recently updated news video, we mentioned that the SOLAS Convention is scheduled to be amended.

It was about adding rules to ensure the safe operation of automated ships, and as you can see, the treaty will be revised as time goes by. 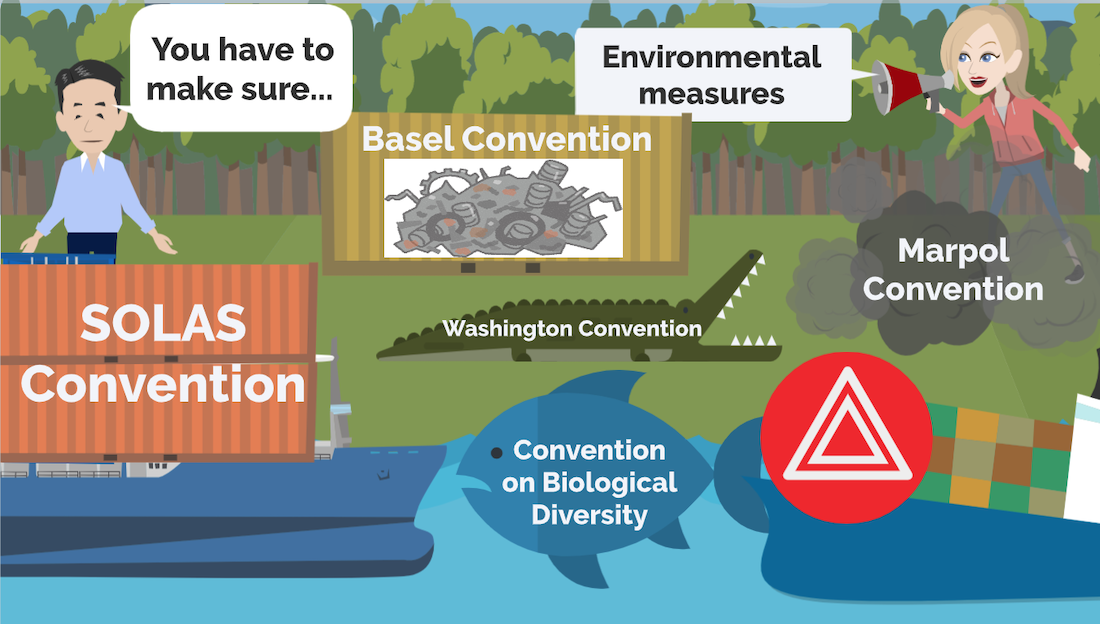 In recent years, environmental measures, including the reduction of greenhouse gases have been attracting attention.
As I explained in this article, trade is also subject to restrictions under various international treaties related to the environment.

As a trade practitioner, you have to make sure that, what your company is about to handle does not infringe on any particular treaty or regulation. 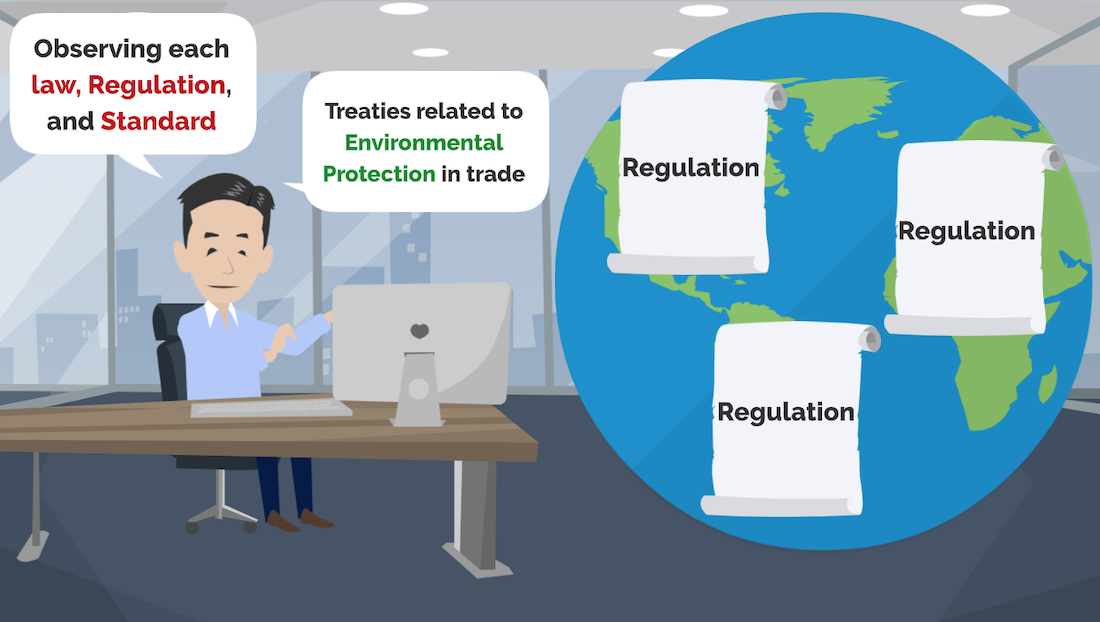 Regulations change with the times.

In particular, I believe that environmental regulations will become even stronger in the future, so we must first learn that there are treaties related to environmental protection in trade, and in practice, we must conduct our business transactions while observing each law, regulation, and standard.

Let’s continue to learn about trade together through this channel.

That’s all I have to say for this episode! Thank you very much!