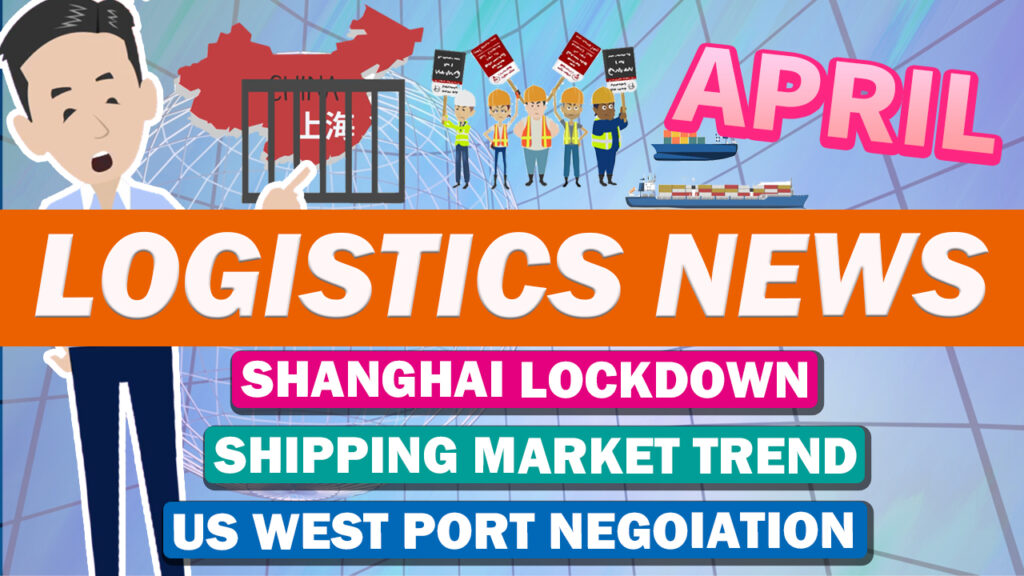 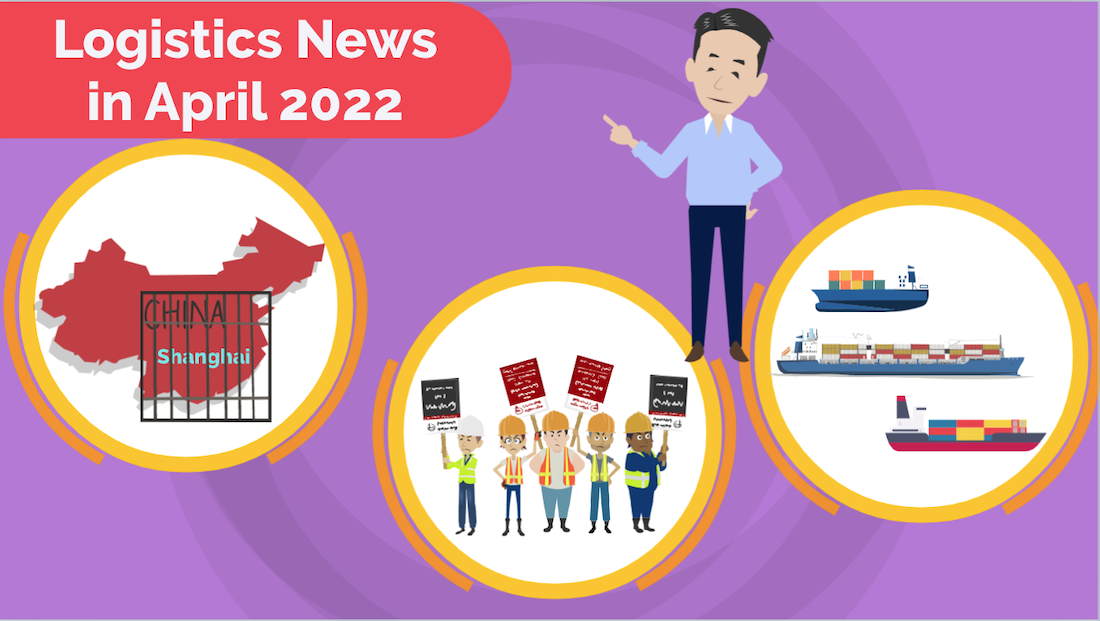 This time, I will provide you with April’s logistics news.

The main topics of this video are the Shanghai lockdown, labor agreements in North America, and recent shipping market conditions. 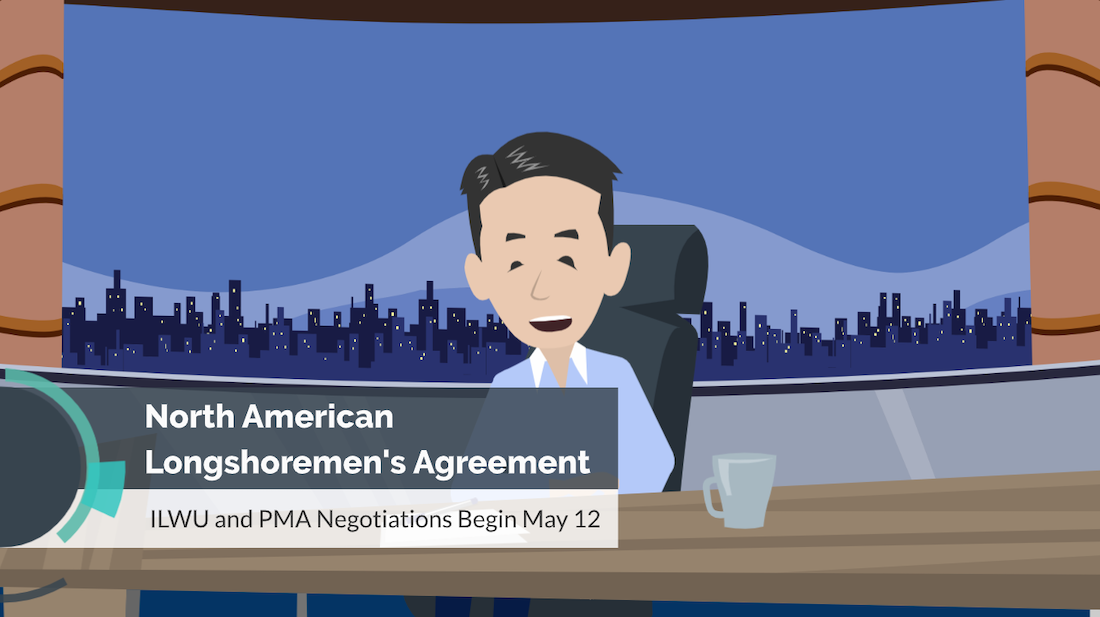 With the West Coast dockworkers’ collective bargaining agreement set to expire on June 30 of this year.

It is announced that the labor organization, ILWU, and the port employers’ association, PMA, start negotiations on May 12. 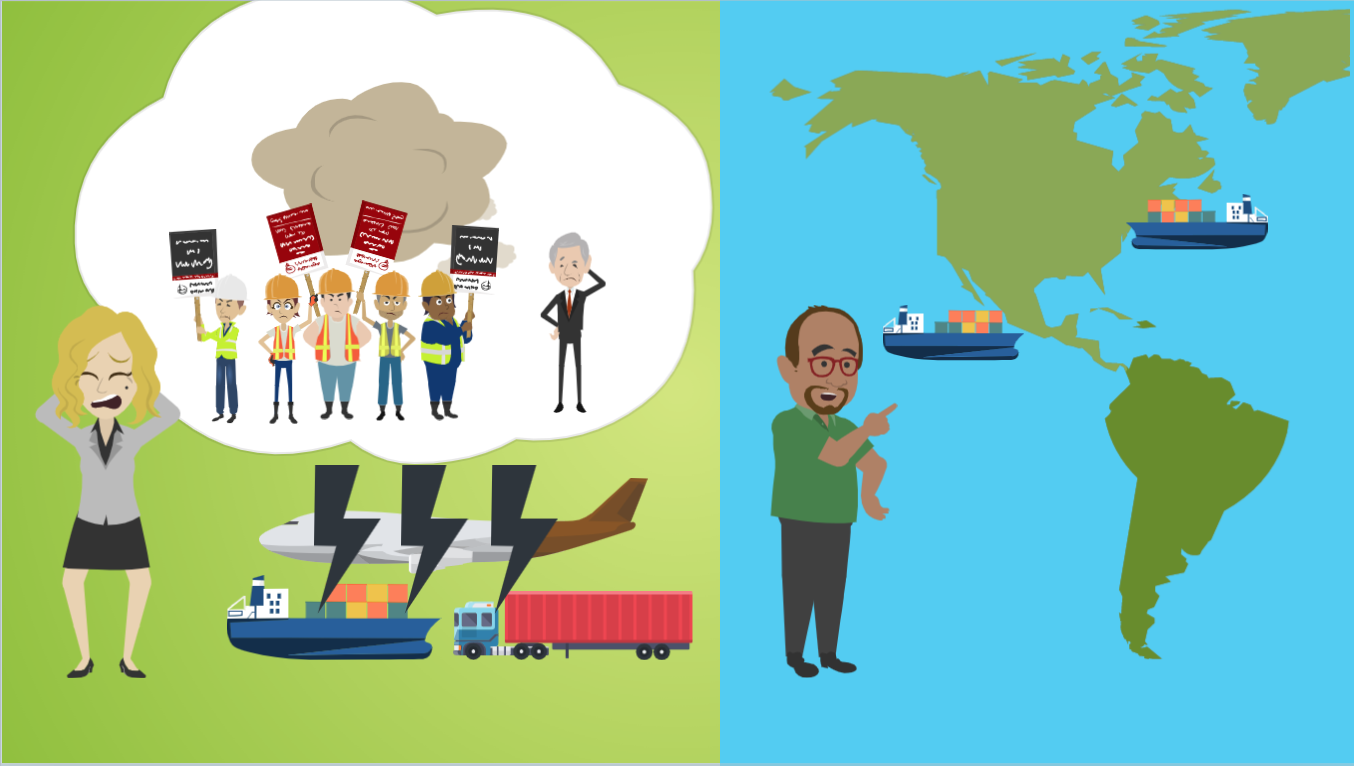 Shippers are concerned that the negotiations will be difficult and will cause further disruptions in the supply chain as these negotiations are taking place in a still turbulent market.

Some shippers have already begun shifting shipments to the East Coast and Gulf Coast to avoid the delays that are quite likely to occur. 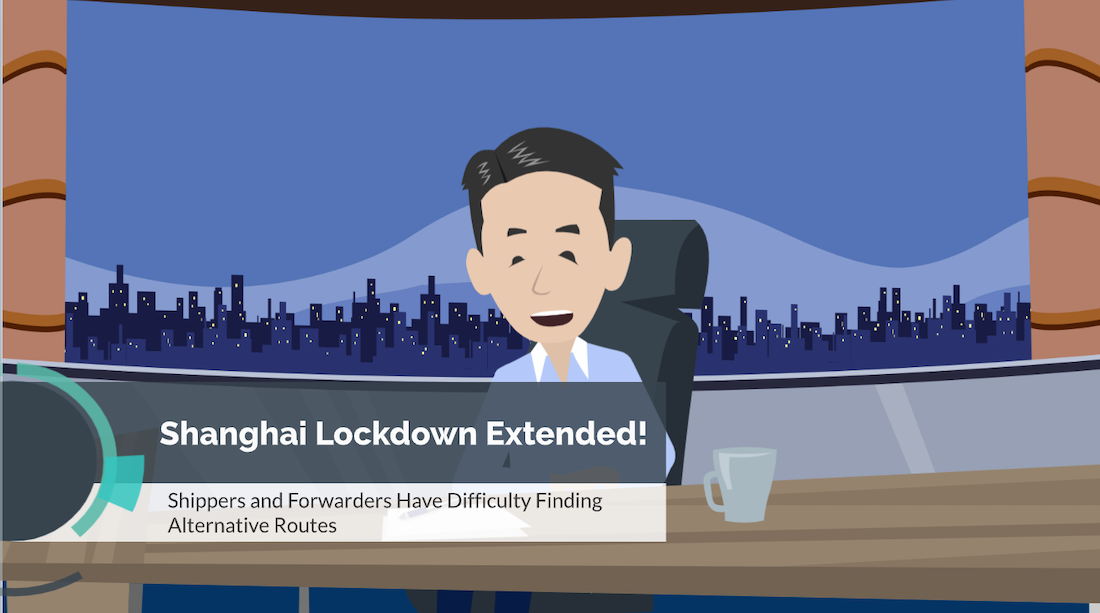 Port of Shanghai itself continues to operate amid the city’s lockdown.

However, restrictions on land transportation have hampered container loading and unloading and import cargos are kept at the port.

As a result, shippers and forwarders are busy securing alternative routes. 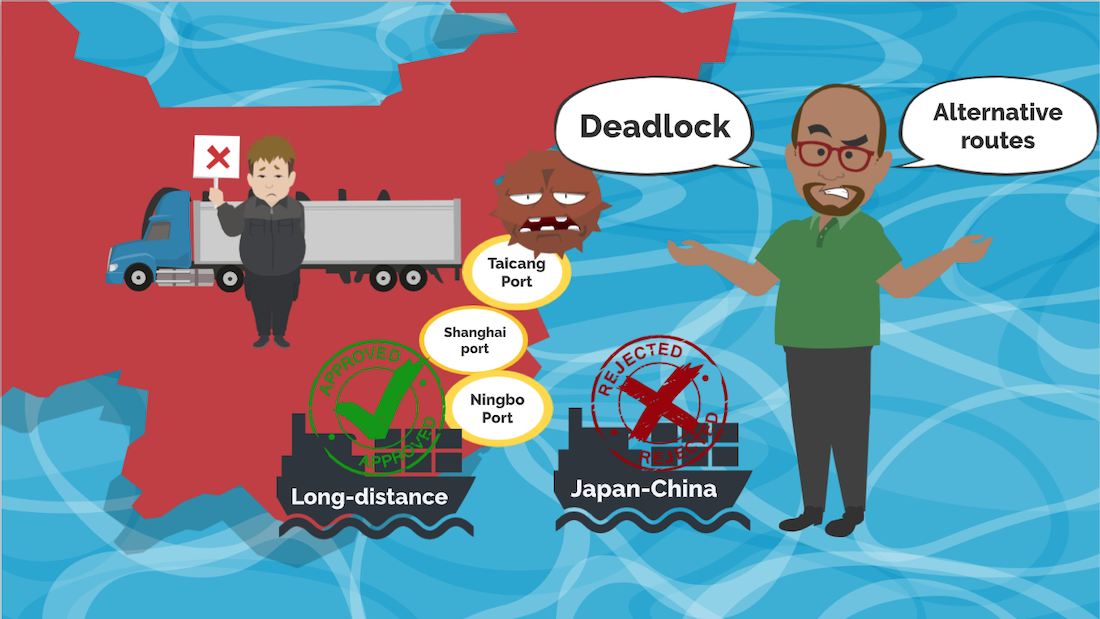 Due to the difficulty of moving within and outside of Shanghai, shippers are considering shifting to Taicang Port, Ningbo Port, which are close to Shanghai Port.

However, there are corona infections at the port of Taicang.

While the port of Ningbo has many alternative services for long-distance routes such as Europe and the U.S., but there are only a limited number of near-sea routes such as the Japan-China route.

The article reports that long-distance land transportation itself remains difficult and the development of alternative routes has reached a deadlock. 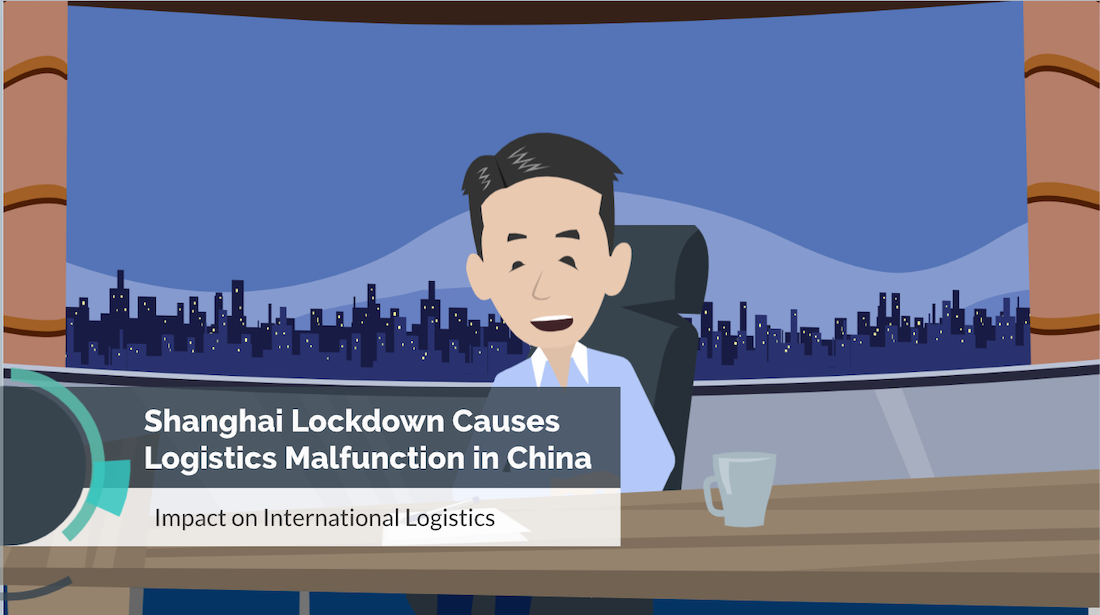 Continuing on with the Shanghai lockdown news.

The Shanghai lockdown is causing logistics to become dysfunctional.

A survey conducted by the Shanghai Japanese Commerce and Industry Club of about 70 member companies revealed that logistics between Shanghai and the rest of the city has been halted. 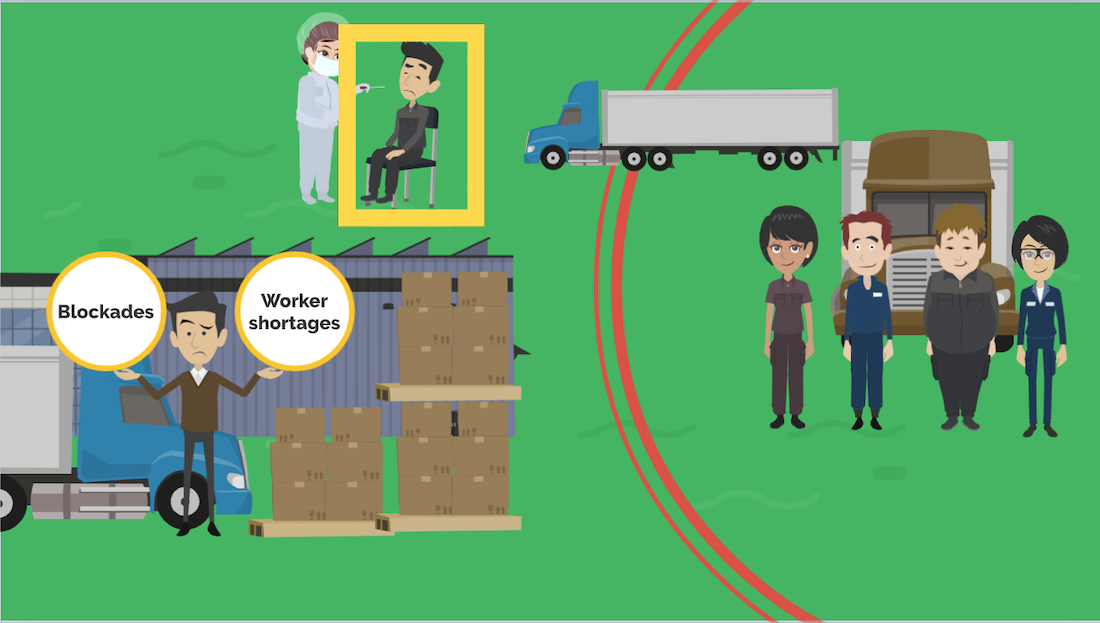 A major factor in the logistics stoppage is the shortage of truck drivers, PCR inspections when crossing the province and driver segregation according to the report.

Even if trucks could be arranged, some said that district blockades and worker shortages made “shipping impractical.”

Many companies are unable to send or receive cargo and their supply chains have been disrupted.

Due to the shortage of cargo handling workers not only drivers, both the port and airport in Shanghai have experienced a significant drop in operations.

Even when some operations are running, there are delays and so on.

Therefore, some companies concerned that “if this situation continues, international logistics will come to a standstill which will have a tremendous impact on trade.” 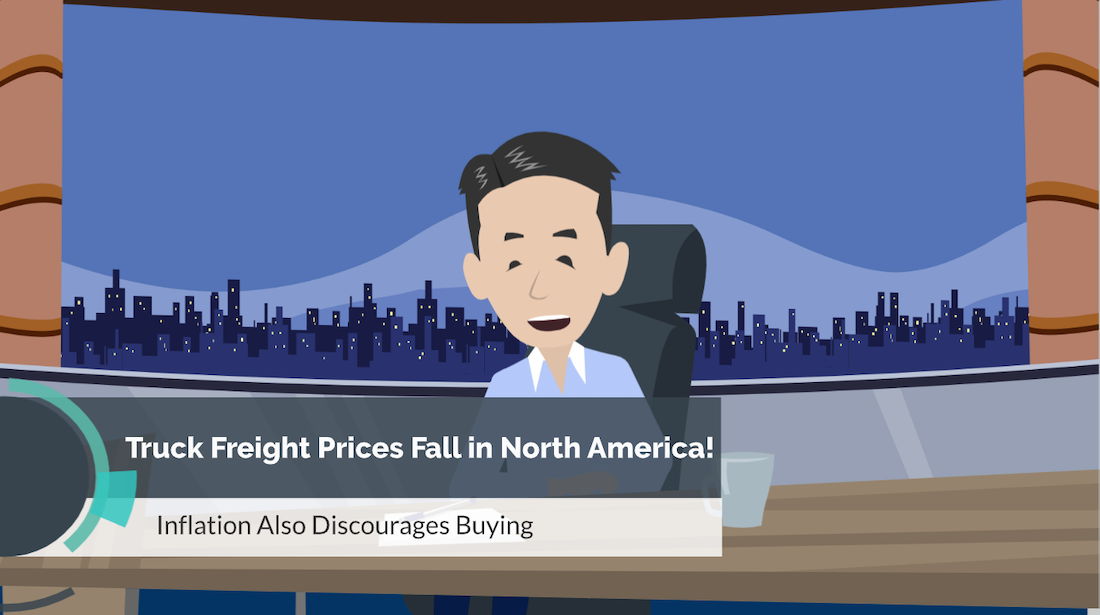 Demand for trucks in North America is settling down.

There was a slowdown in growth in the index of domestic transportation demand in March, up 0.6% from the previous month.

At the same time, freight rates are being lowered from recent historically high levels. 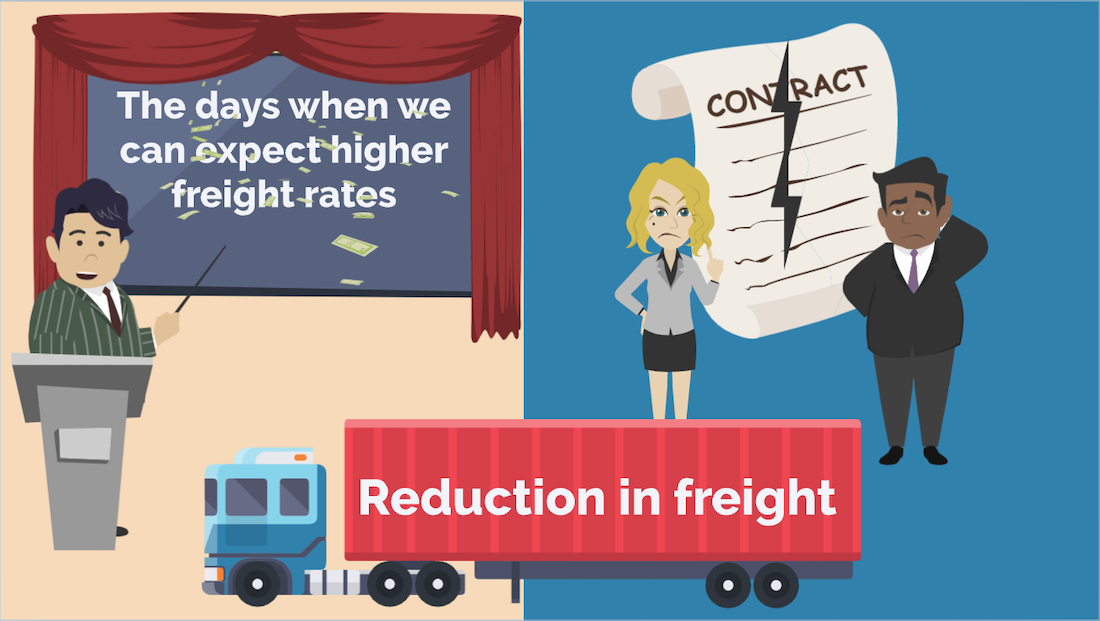 A trucking analyst stated that “It is safe to say that the days when we can expect higher freight rates are over.”

Shippers who currently have expensive contracts due to lack of capacity in transportation are also breaking those contracts in search of lower rates as the market changes.

It is said that while there is still high demand for transportation from large trucking companies, we’re not going to see the same kind of boost that we’ve seen in the last couple of years. 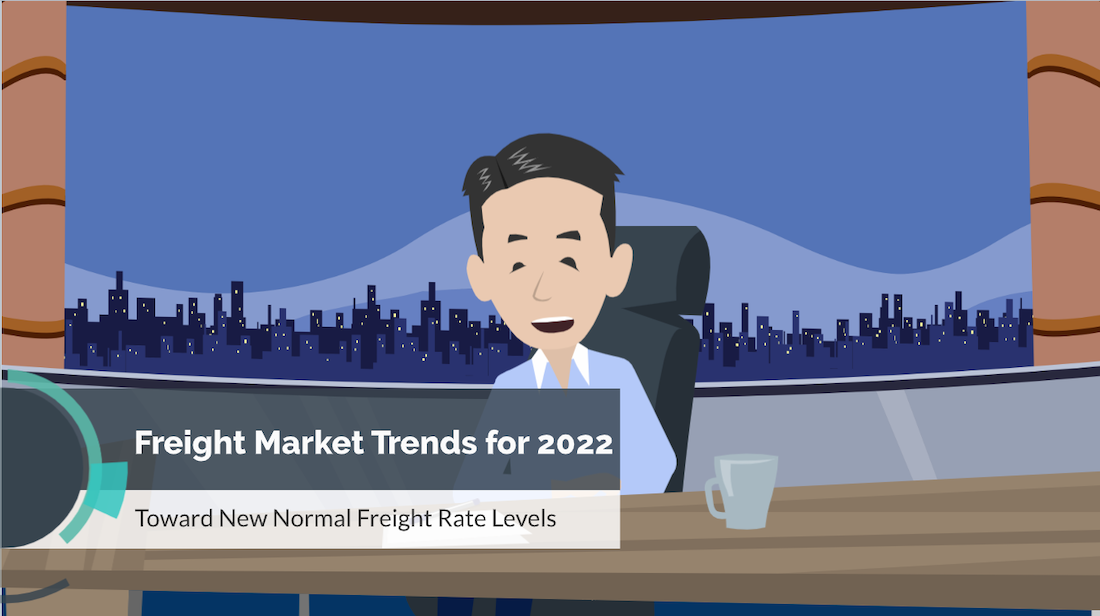 Negotiations for this year’s service contracts are already in the final stages.

In the negotiations between major BCO, actual shippers, and shipping companies, freight rates themselves were not a point of contention.

Shippers’ space-first attitude was evident and more shippers were seeking multi-year contracts than in previous years. 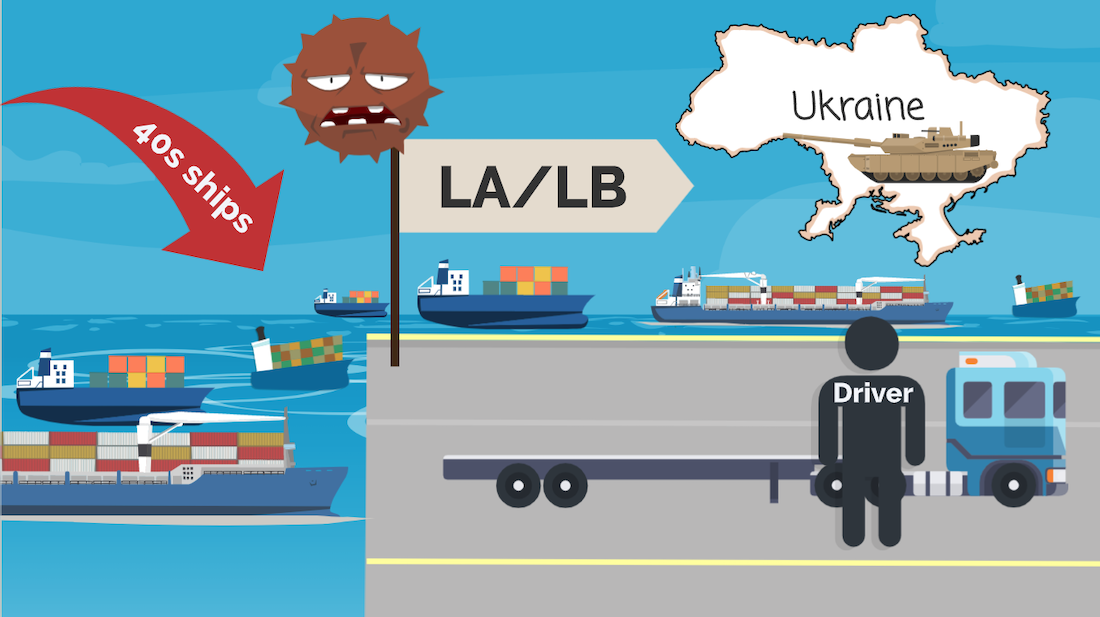 Offshore waiting at the ports of Los Angeles and Long Beach the number of vessels dropped to the 40s in mid-March.

However, there is also an ongoing problem of a shortage of drayage driver for container loading and unloading.

Risks to the international supply chain are increasing due to the situation in Ukraine and the re-emergence of the Corona pandemic. 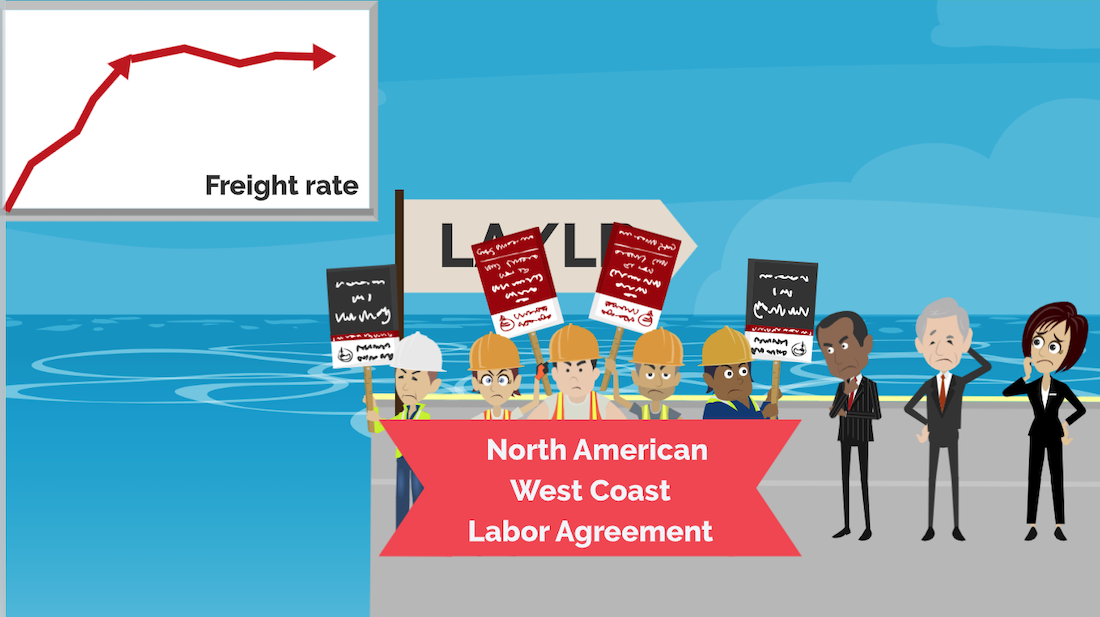 In addition, negotiations on the revision of the North American West Coast Labor Agreement which expires on July 1 are also coming up.

Looking at these points, I do not see any factors that would cause ocean freight rates to decline.

While it is true that freight rate hikes have been halted, the fundamental problem has not yet been solved and there has been no significant change in the situation of high prices. 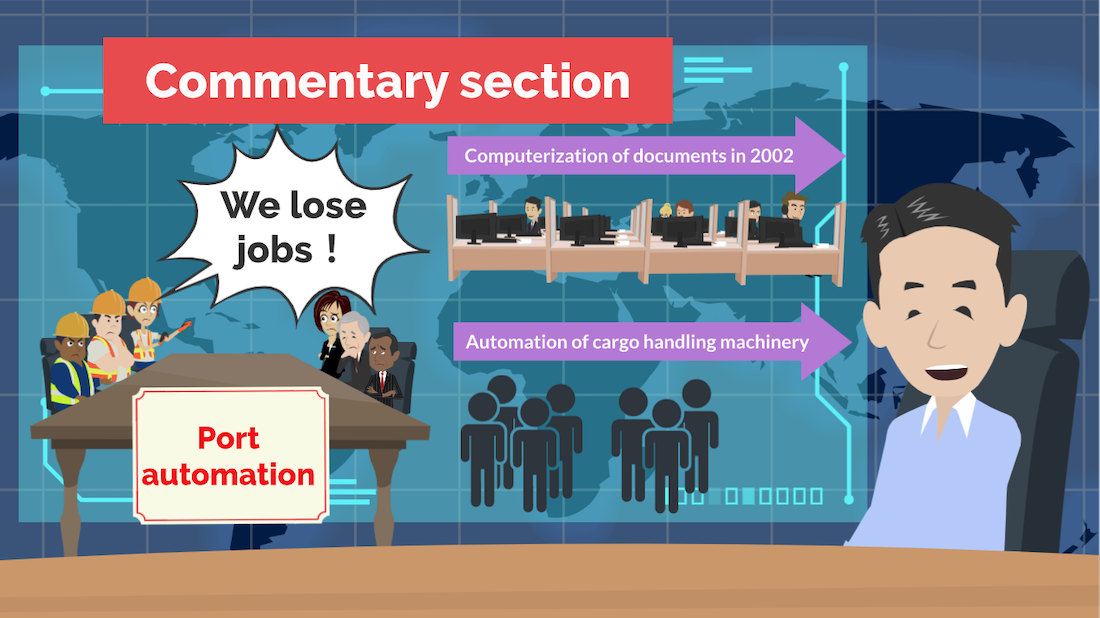 Let’s turn now to the commentary section of the news.

First up is news on the North American Longshoremen’s and Harbor Workers’ Agreement.

Negotiations are likely to be difficult this time because port automation is up for discussion.

In the past, electronic and mechanized systems have resulted in the loss of jobs at ports. 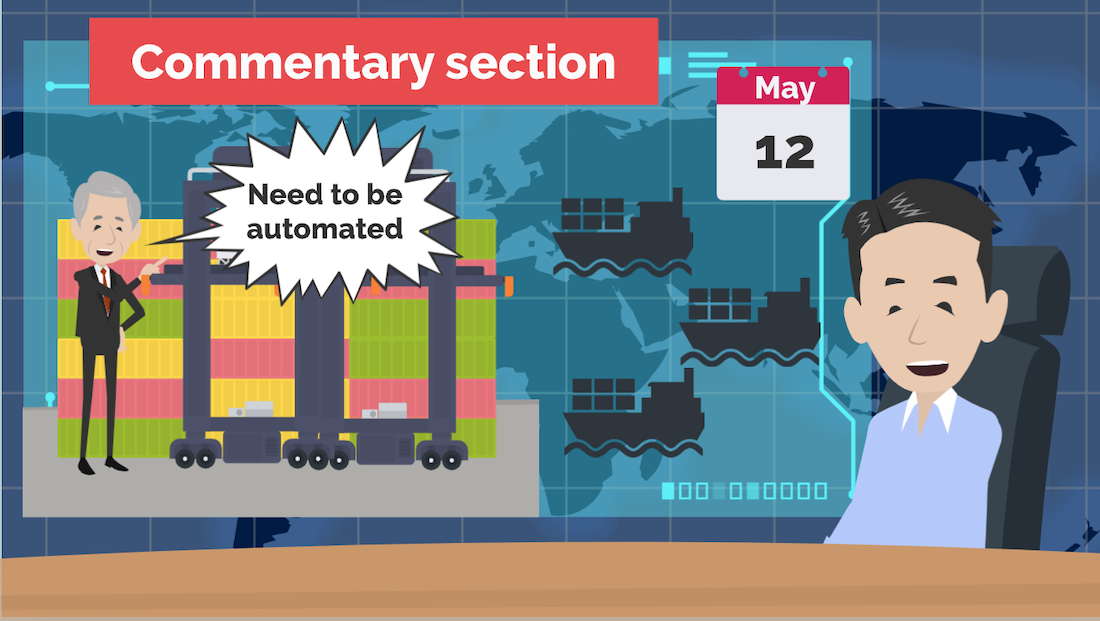 On the other hand, port users point out that automation will nearly double the amount of cargo that can be handled on the same site area.

Therefore, some West Coast terminals need to be automated in order to continue handling record cargo volumes each year.

Negotiations will begin on May 12, so the pace of port operations may slow down and offshore waiting may increase again around the beginning of May.

The market is likely to be disrupted, so please be as prepared as possible. 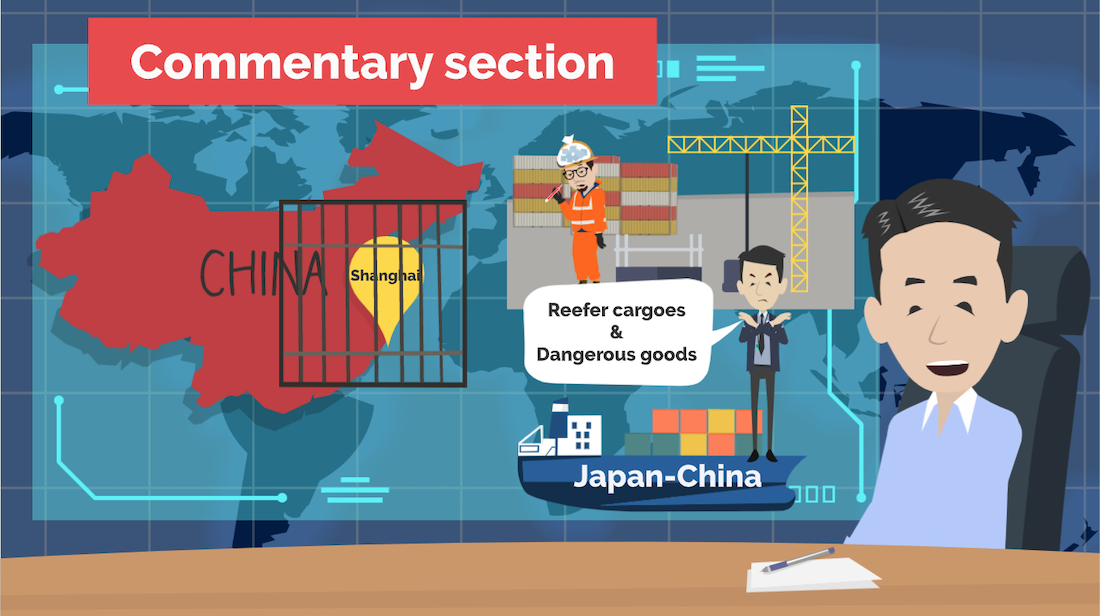 In this video, I have brought you two news items, about the lockdown in Shanghai.

Although the container terminal at the Port of Shanghai is in operation, the efficiency of operations is declining, with some workers becoming infected.

Due to problems with yard facilities, including a lack of plugs due to cargo backlogs, some shipping lines operating Japan-China routes have decided to temporarily suspend booking of reefer cargoes and dangerous goods bound for Shanghai. 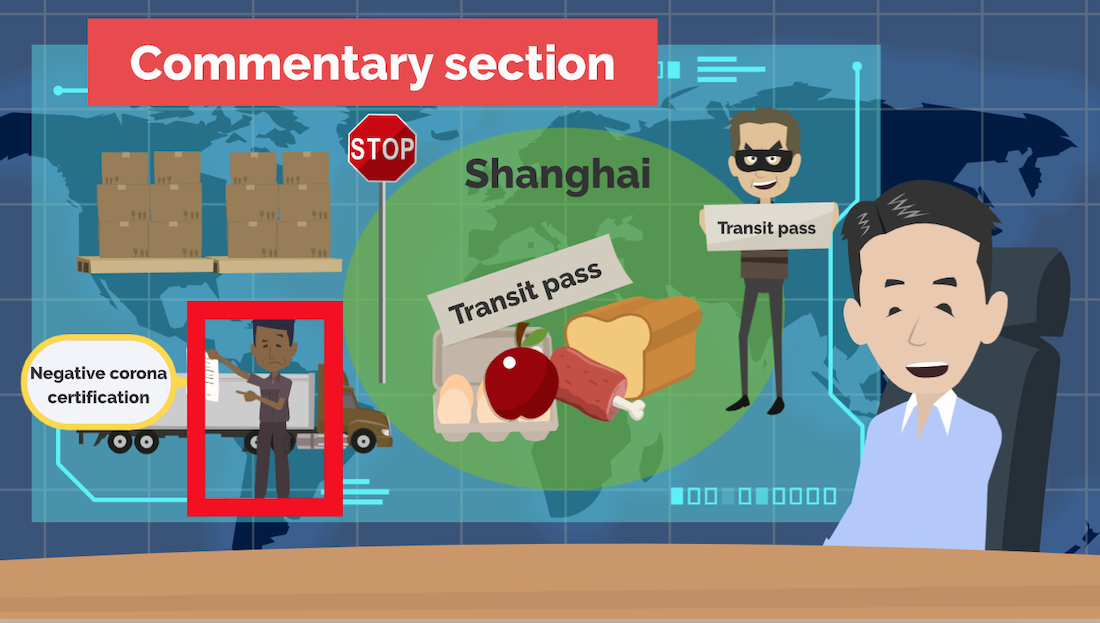 Drivers are faced with restrictions, such as the need to submit negative corona certification within 48 hours and the need for a quarantine period for land transportation across the province.

As for cargo outside of Shanghai, it is virtually impossible to carry it in and out of the Port of Shanghai.

The government issues “transit passes” for the transportation of essential goods such as foodstuffs, but there are reportedly moves to abuse using the pass for purposes other than their intended use.

The Shanghai lockdown has crippled logistics.

The space for air flights from Japan to Shanghai has been reduced to about half of its normal capacity. Also, it is difficult to carry cargo out of the airport and causing serious cargo backlogs in the sheds.

In addition to it, at the port of Shanghai, there are some cases that arriving vessels are returning to the port of departure and reported that the capacity of ports in the Shanghai vicinity is also limited. 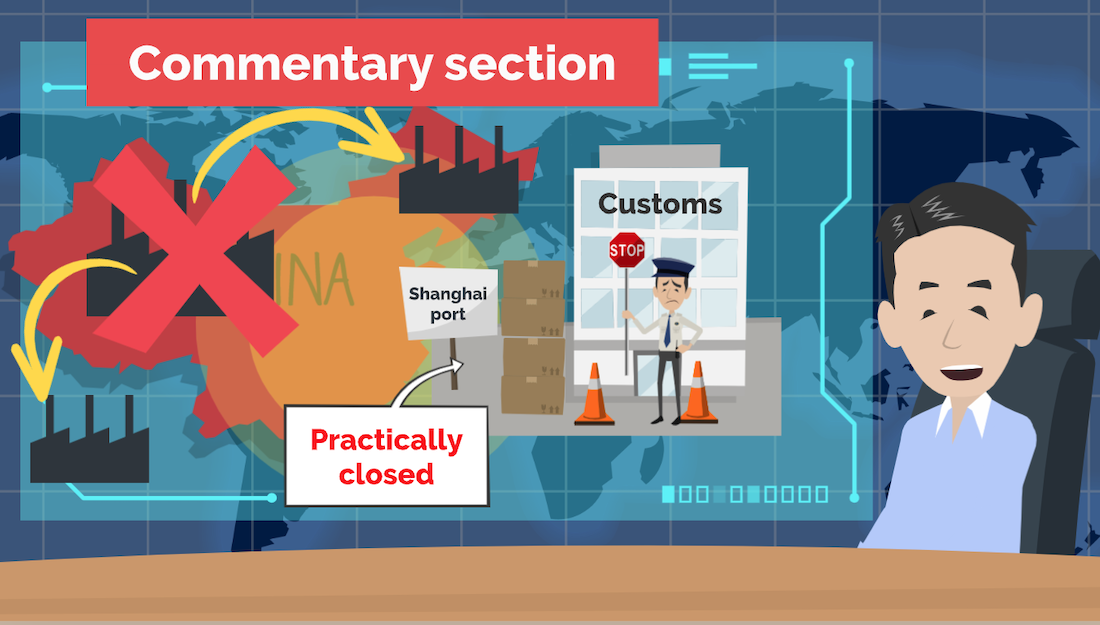 Customs clearance has also been suspended in some areas and some are calling the current situation at the Port of Shanghai “practically closed.”

The disruption of logistics functions is spreading across the country.

Some factories have suspended operations and production in China and abroad has begun to be disrupted. Therefore, there are companies who are shifting production to other regions or outside of China. 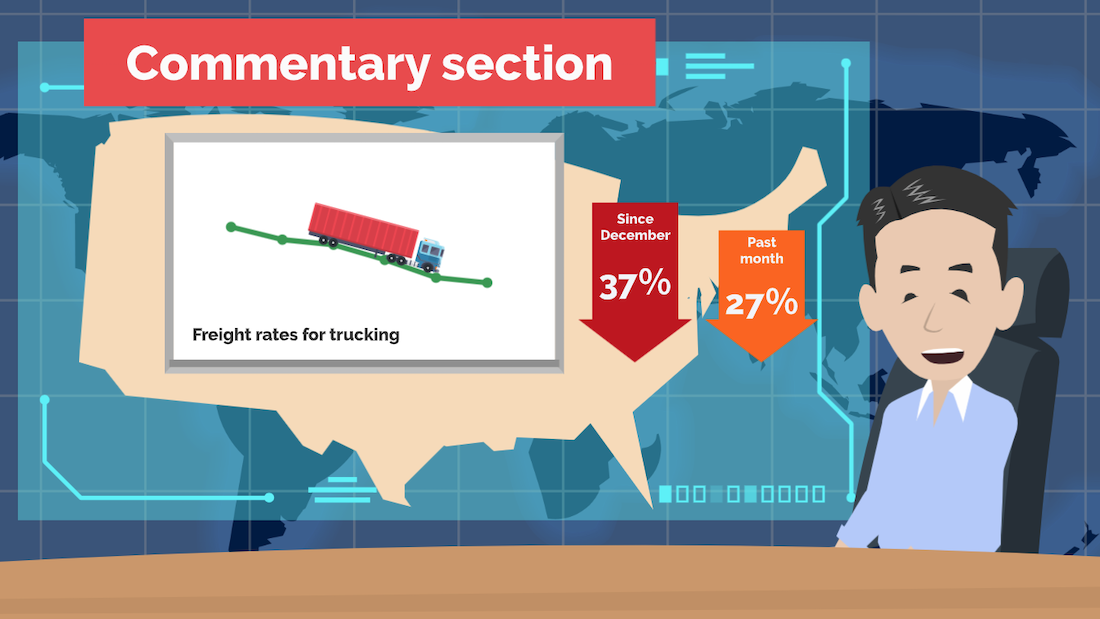 Spot freight rates for trucking are falling in North America.

Excluding fuel surcharges, truck spot freight rates have fallen 37% since December, and in the past month prices have fallen considerably dropping 27%. 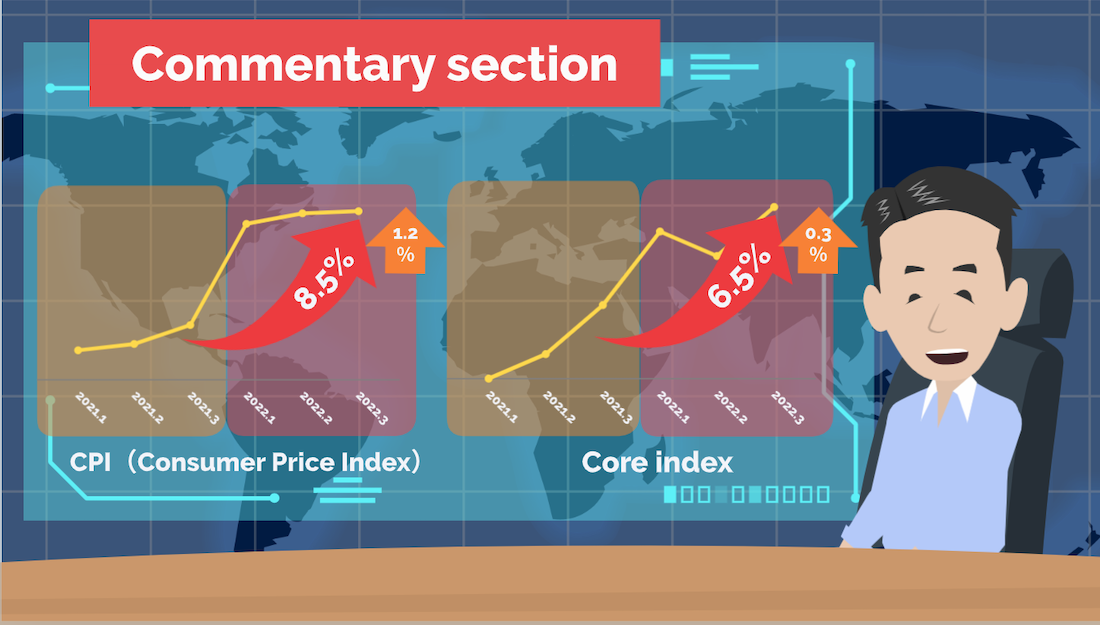 Inflation is currently quite high in North America and CPI, Consumer Price Index, rose 8.5% year on year in March.

The core index which excludes the more volatile energy and food items rose 6.5% year on year, while month-over-month CPI rose 1.2% and the core index rose 0.3%. 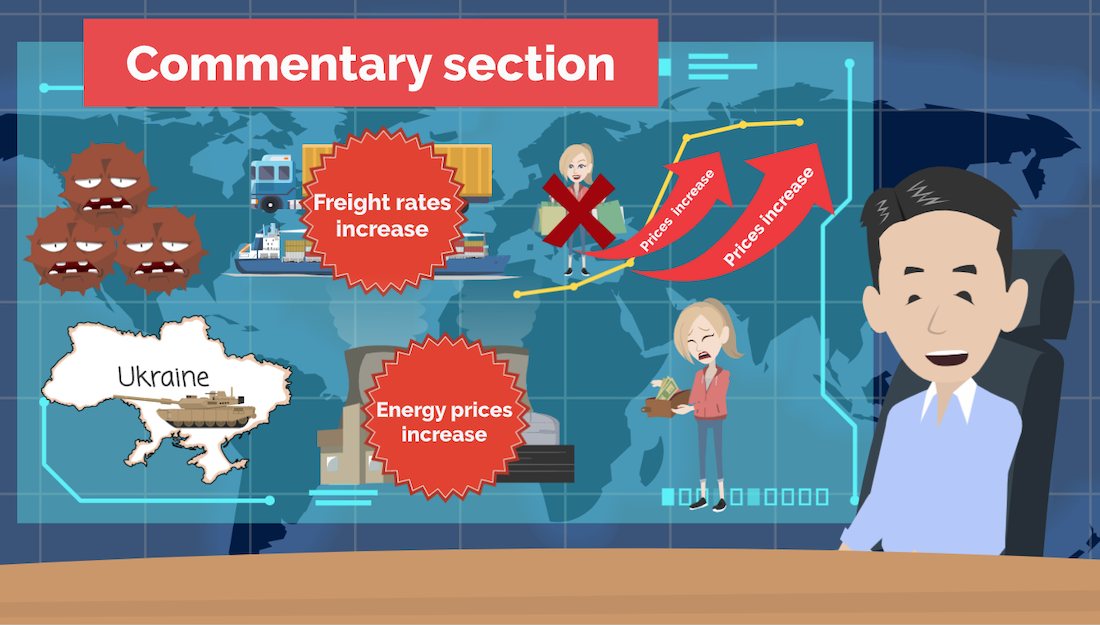 If gasoline, electricity and food prices rise, I suspect that people will be more reluctant to buy.

If the cost of living rises as it is now and people are reluctant to buy houses and cars that they purchase with loans and demand falls, cargo movements will also fall.

Then, the logistics bottleneck will begin to dissipate. 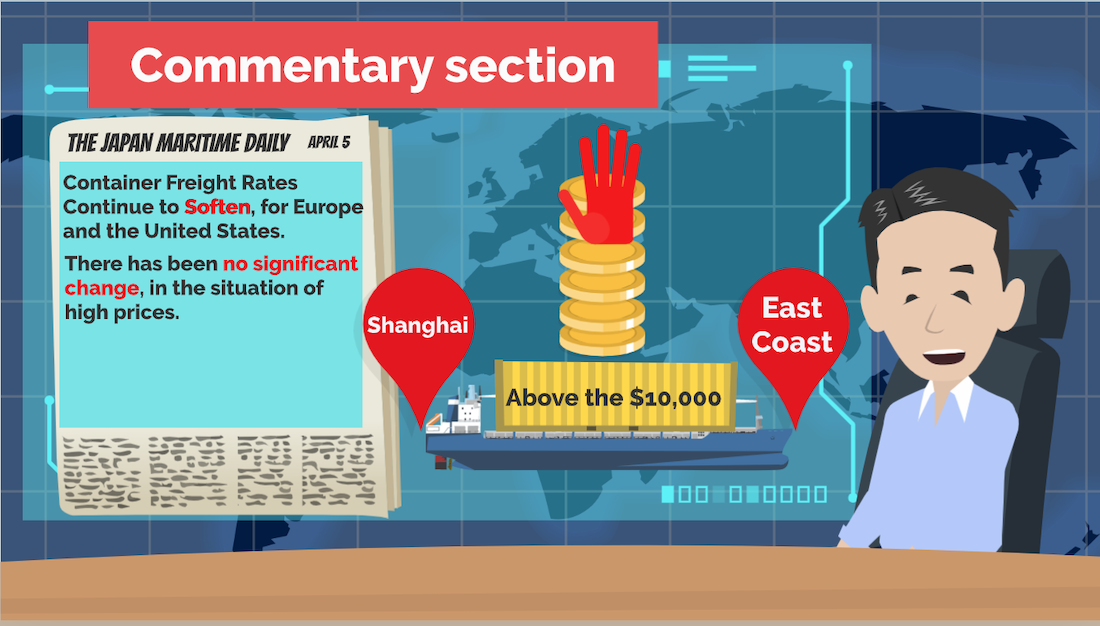 Finally, here is news on shipping market trends for 2022.

The April 5 issue of THE JAPAN MARITIME DAILY reported, “Container Freight Rates Continue to Soften, for Europe and the United States.”

However, even with the “softening,” spot freight rates from Shanghai to the East Coast of North America are still above the $10,000 level.

While it is true that freight rate hikes have been halted, the article reports that the fundamental problem has not yet been solved and there has been no significant change in the situation of high prices. 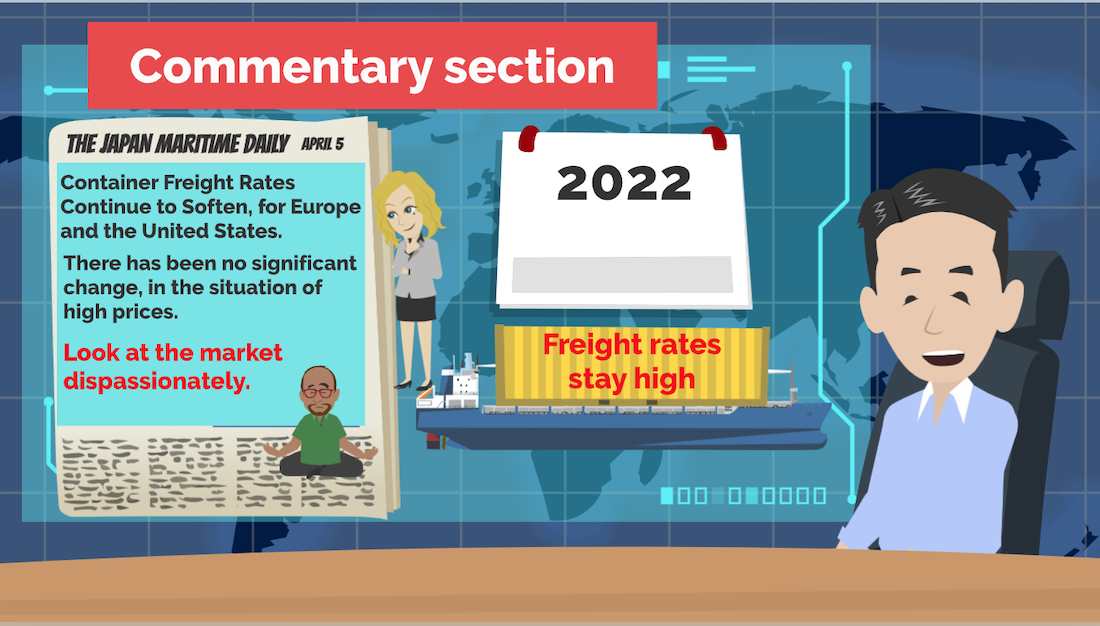 At least for the full year of 2022, container freight rates are unlikely to change dramatically from their high levels.

The article concludes by saying that shippers need to accept the current freight rate levels as the new normal and look at the market dispassionately. 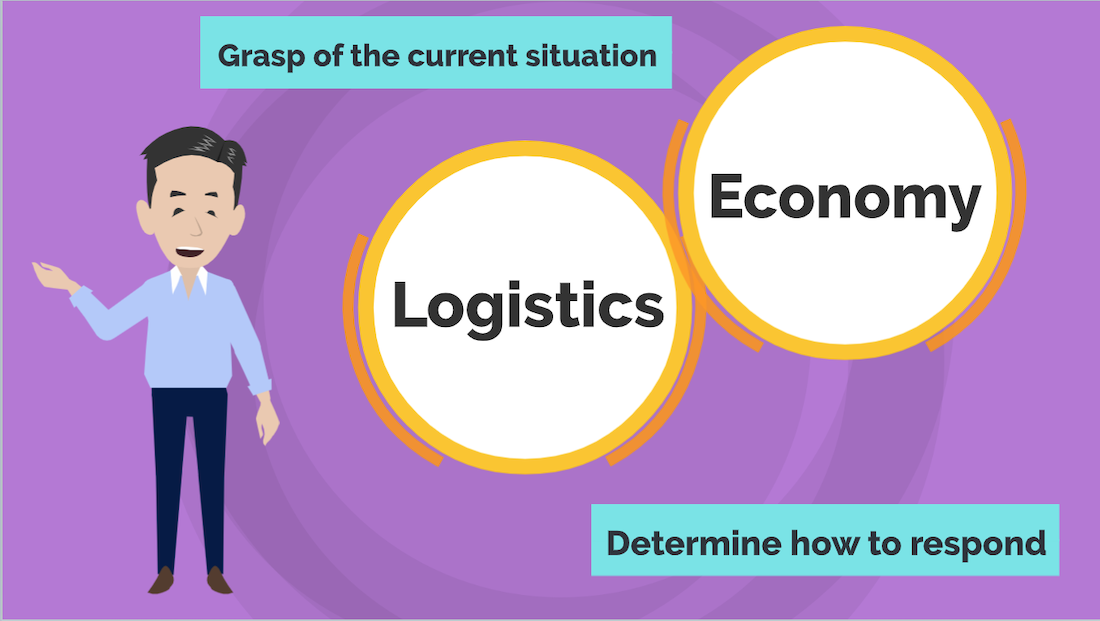 How was this news?

Logistics is closely related to the movement of the economy.

Especially in these days when supply chains are in disarray, it will be necessary for us to have a firm grasp of the current situation and determine how to respond to it in the future.

That’s all for this time. Thank you very much.