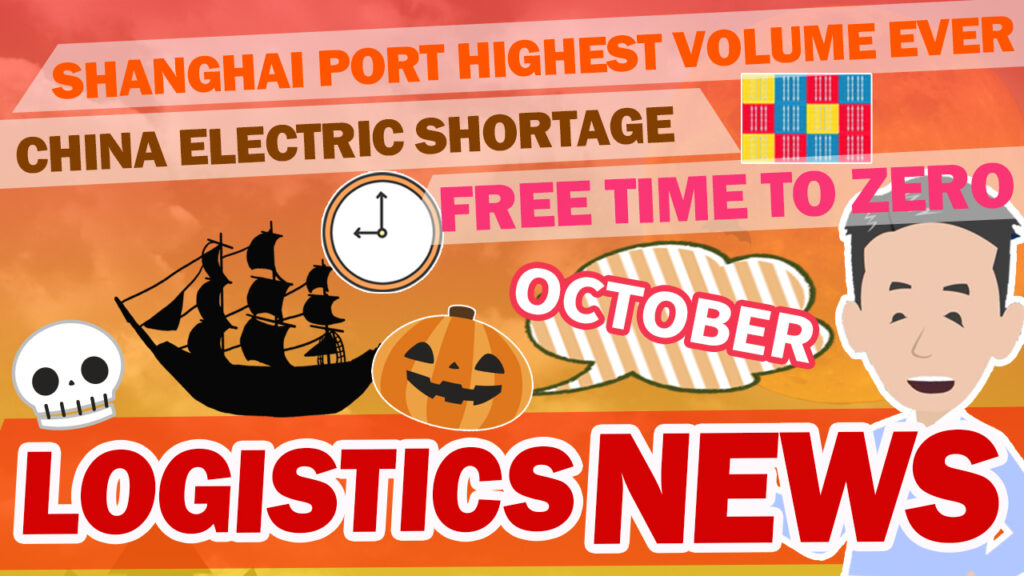 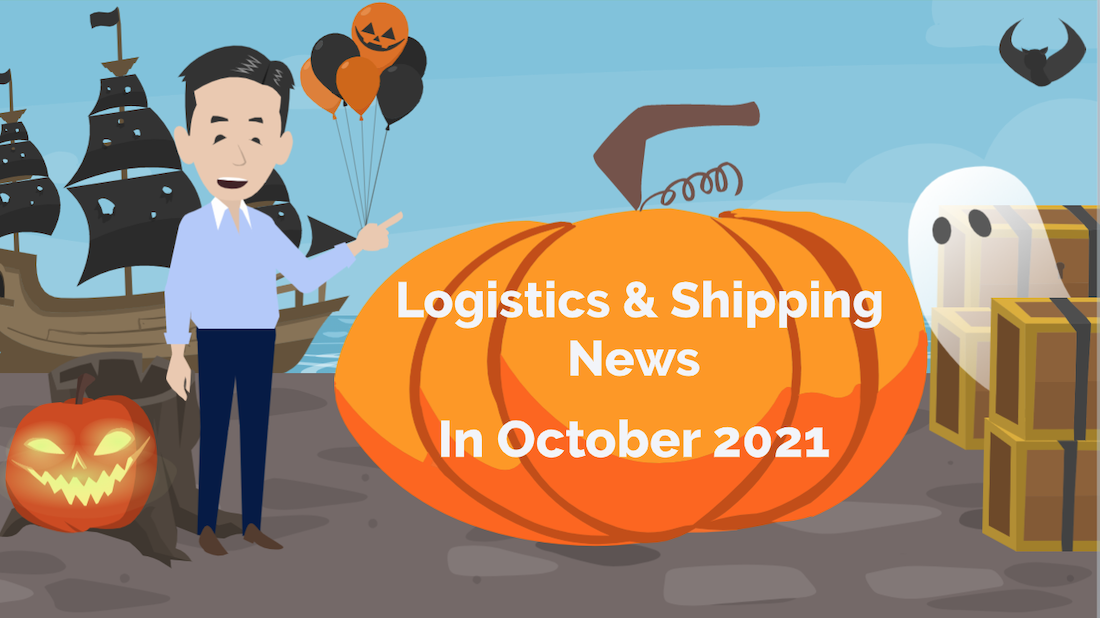 This time, I would like to present you with the news, related to logistics and shipping for October 2021.

I hope you will enjoy this month’s carefully selected and useful information. 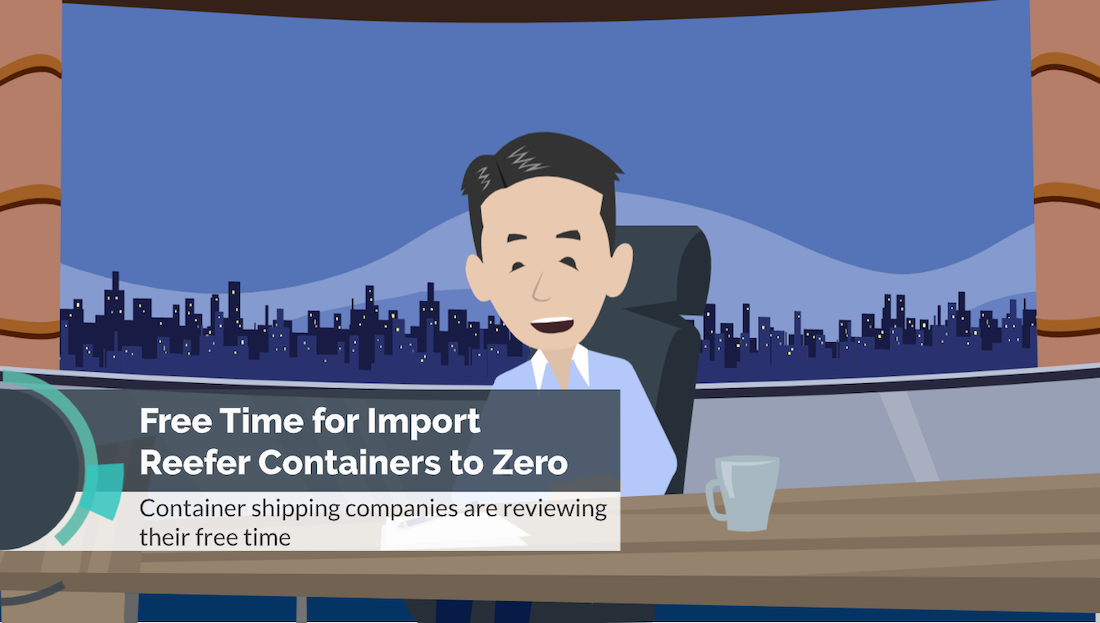 As container shortages worsen due to disruptions in global supply chains, container shipping companies are reviewing their free time, the period of free storage for containers. 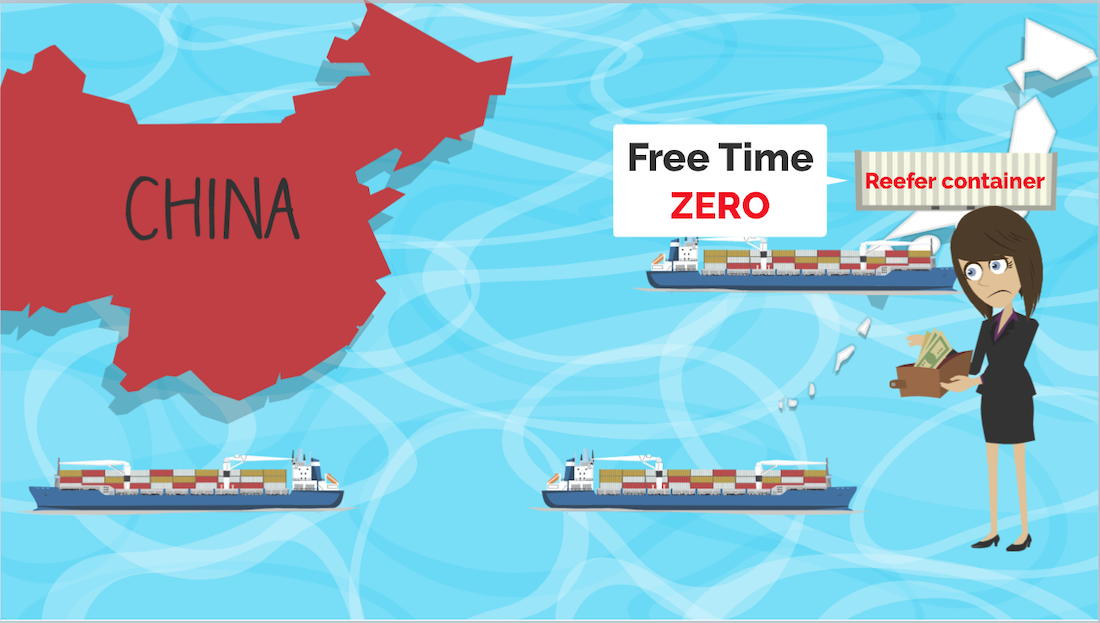 On routes between China and Japan, Chinese shipping companies changed the method of calculating free time from October to free time from three business days to zero for reefer containers, and storage fees are now charged immediately.

Such changes are spreading not only on Japan-China routes but also on other core routes. 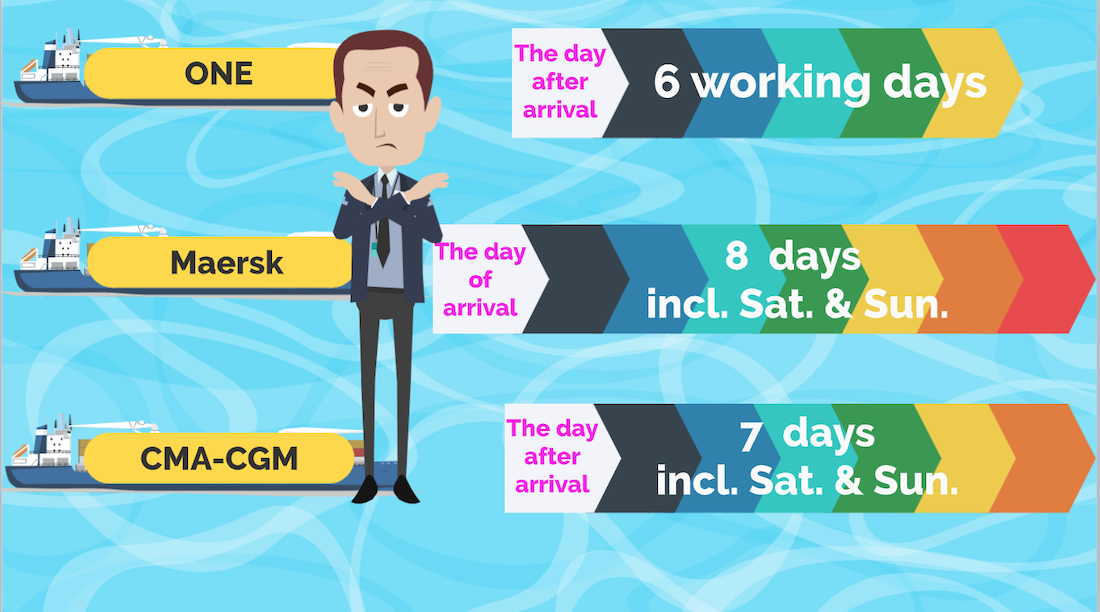 The starting date for each of these is the day of arrival for Maersk and the day after arrival for ONE and CMA-CGM.

There is a growing tendency for companies to tighten up the operation of free time and not to allow extensions which used to be handled on an individual basis. 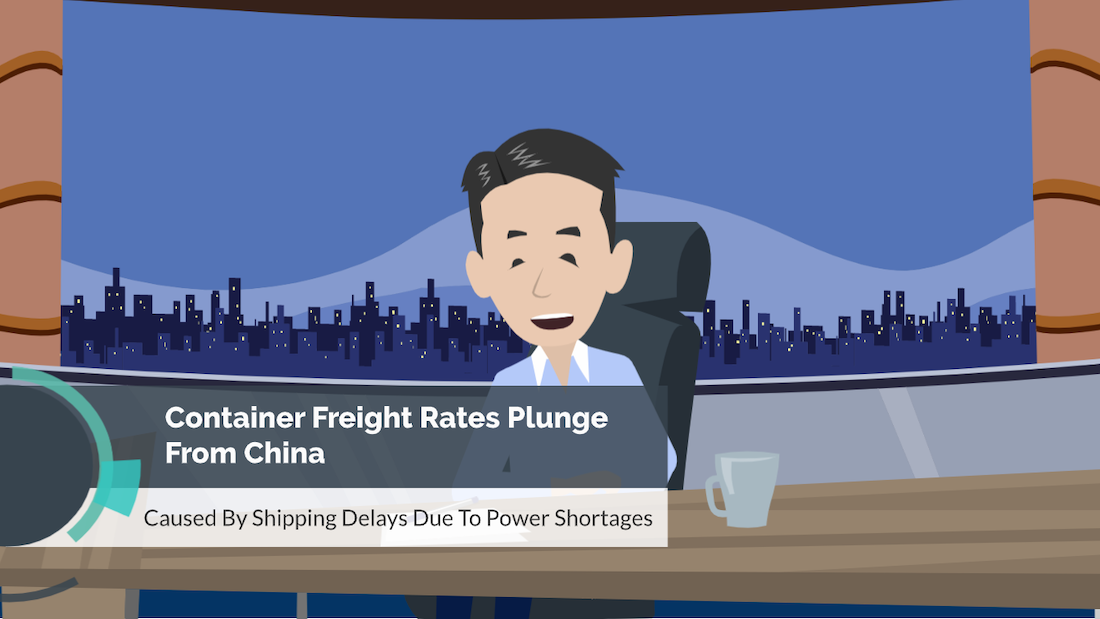 Container freight rates from China plummeted at the end of September. 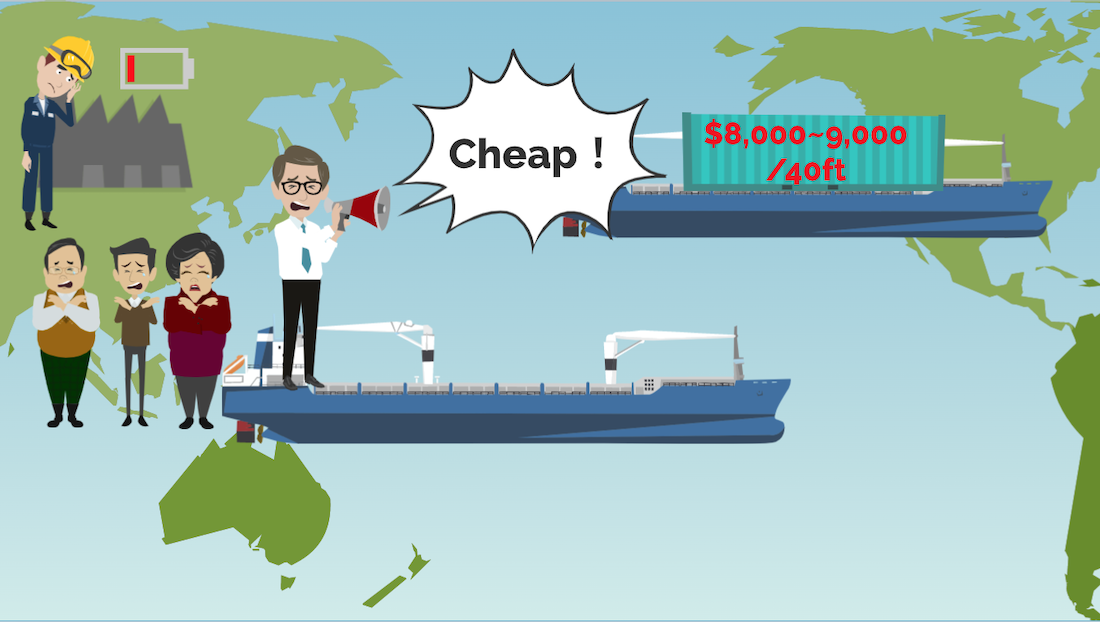 Due to the power shortage in China, many Chinese shippers cancelled Bookings. They could not finish production before the National Day of China, then it is believed to be due to forwarders dumped container spaces which had become available due to cansellation. 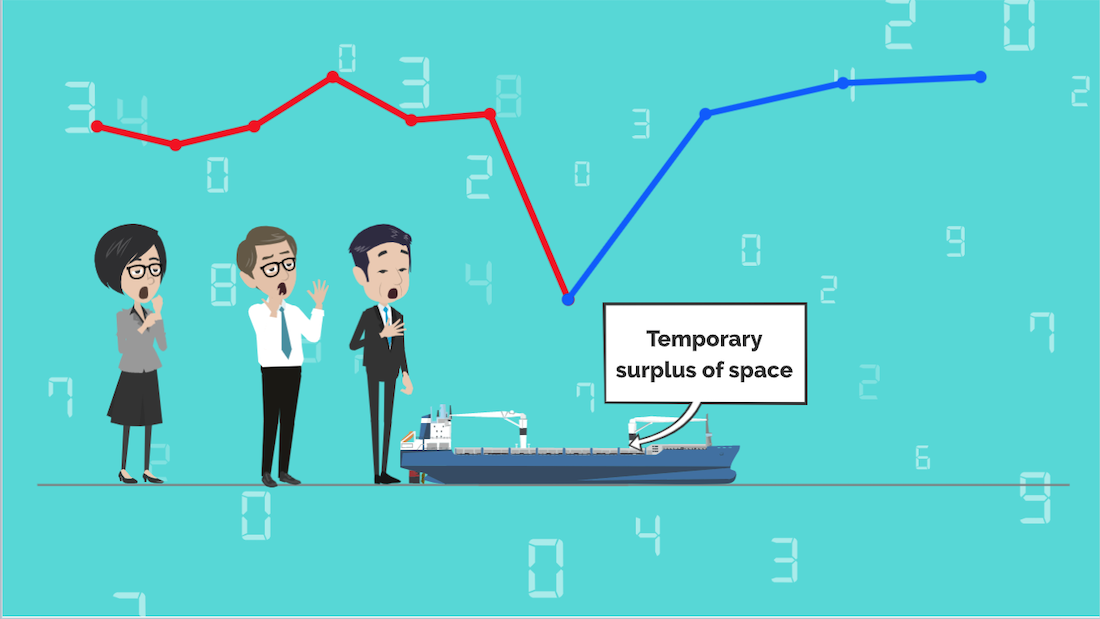 The first decline in freight rates in six months is seen as a major shock to the market.

However, it is also pointed out that the market may recover after shipments resume, because it is a temporary surplus of space caused by delays in factory shipments in China.

154 Ships Waiting Offshore at the Ports of Shanghai and Ningbo 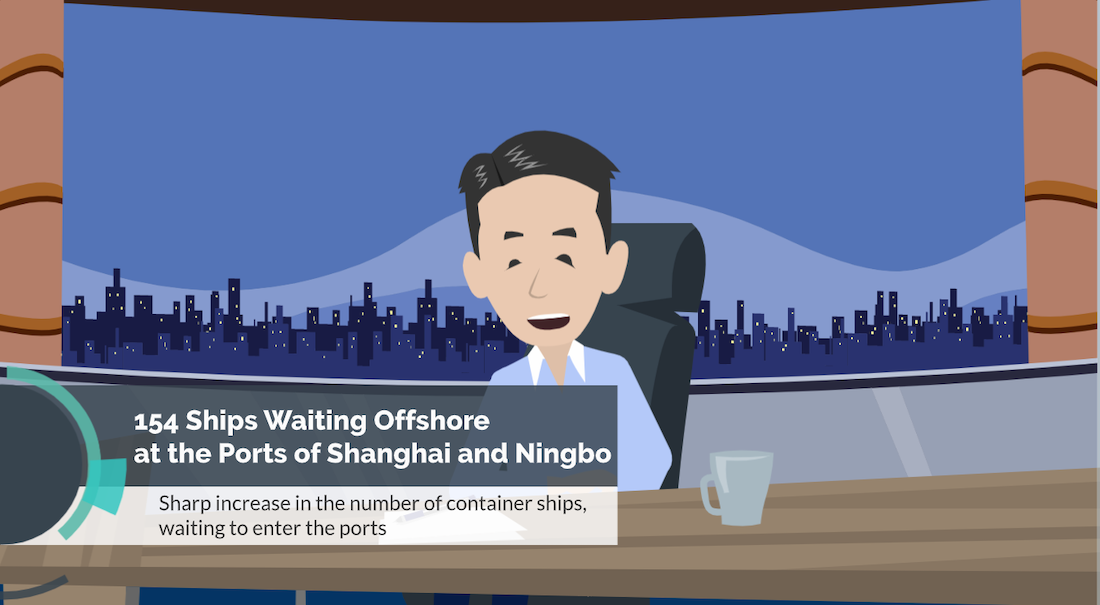 There has been a sharp increase in the number of container ships, waiting to enter the ports of Shanghai and Ningbo in China. 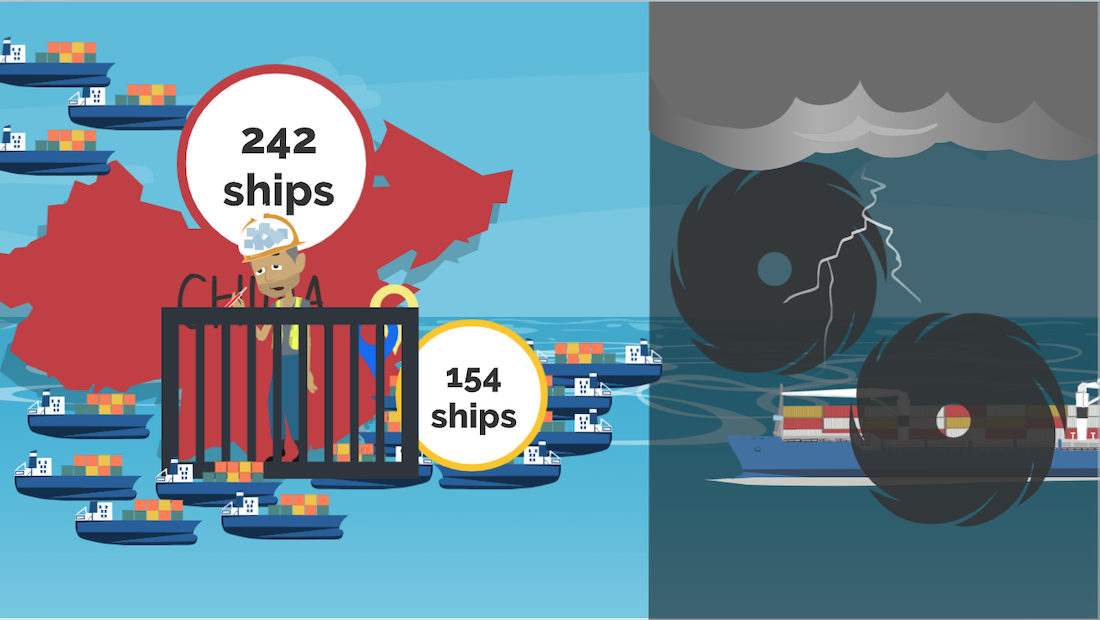 The increase in the number of vessels waiting offshore in China, is due to an outbreak of corona among dockworkers, which led to the closure of terminals, and a series of typhoons, which delayed the vessel’s schedule. 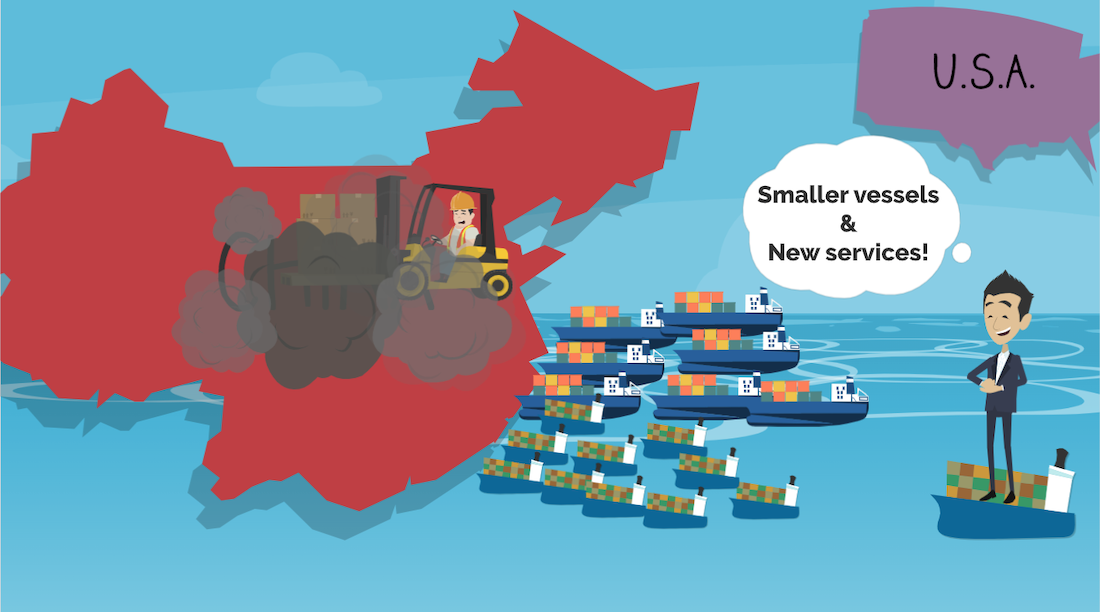 Other causes include an increase in the number of newly launched vessels, which have been downsized, on the route between China and North America, resulting in lower efficiency and worsening congestion.

A major factor seems to be that, due to soaring spot freight rates, new shipping companies, in addition to existing ones, have started chartering smaller vessels and offering new services. 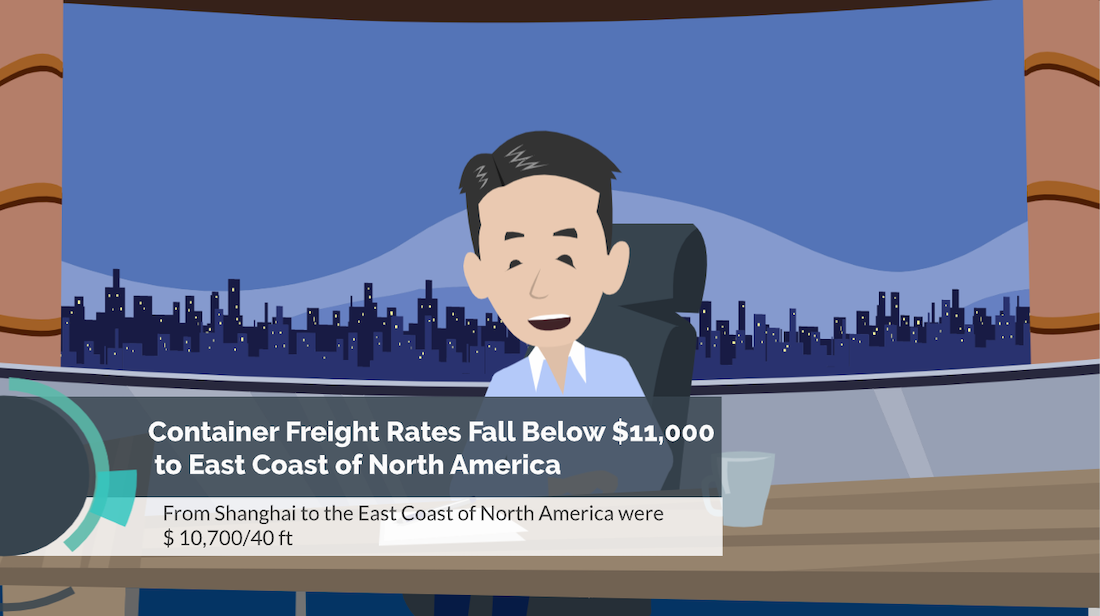 As of October 15th, container freight rates from Shanghai, China to the East Coast of North America were USD 10,700 for 40 feet falling below USD 11,000 for the first time in two months. 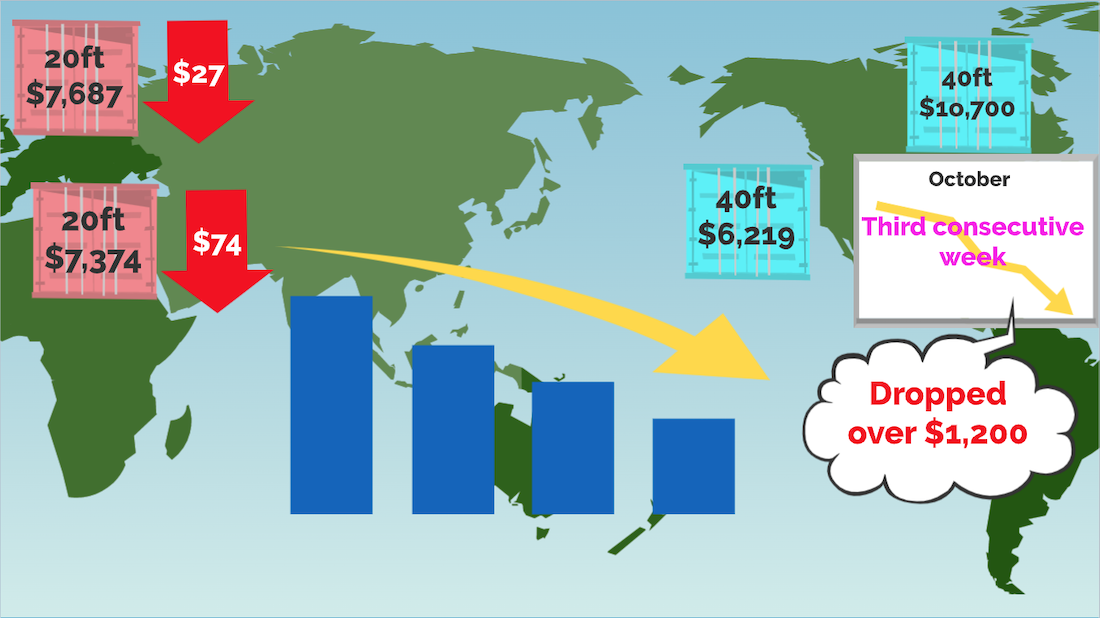 This is the third consecutive week of price declines in October and has dropped over USD 1,200 since the beginning of the month. The price to West of North America also dropped to USD 6,219 the first drop since early June.

Outside of North America, there was a steady downward trend, as of October 15th, with prices to Northern Europe at USD 7,687 per 20 feet down USD 27 from the previous week and to the Mediterranean Sea was USD 7,374, down USD 74 as well. 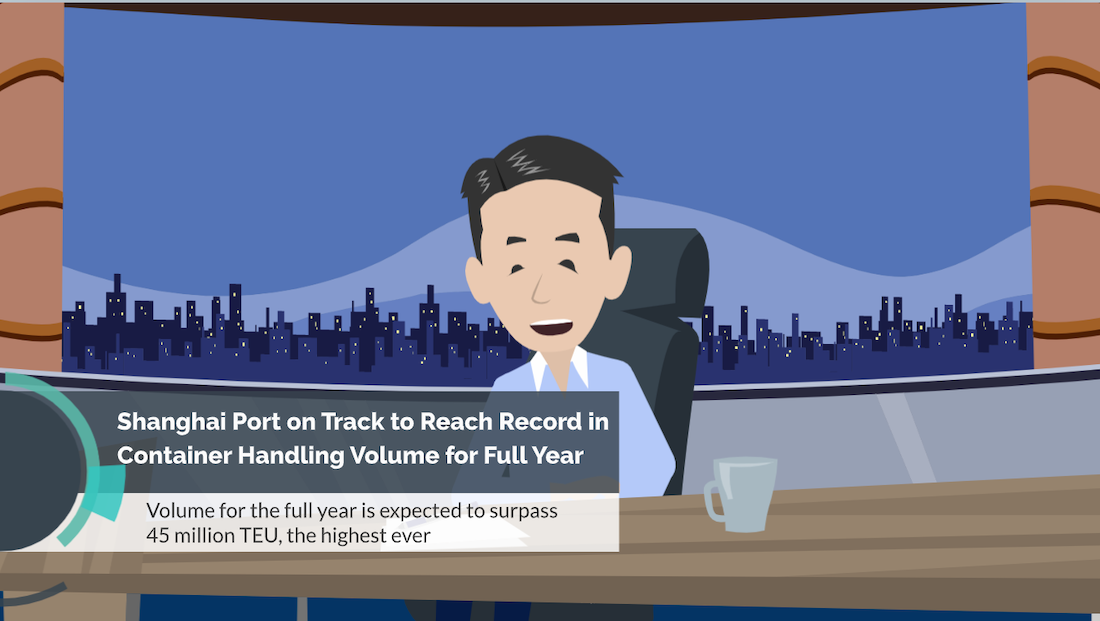 If this trend continues, the volume for the full year is expected to surpass 45 million TEU, the highest ever. 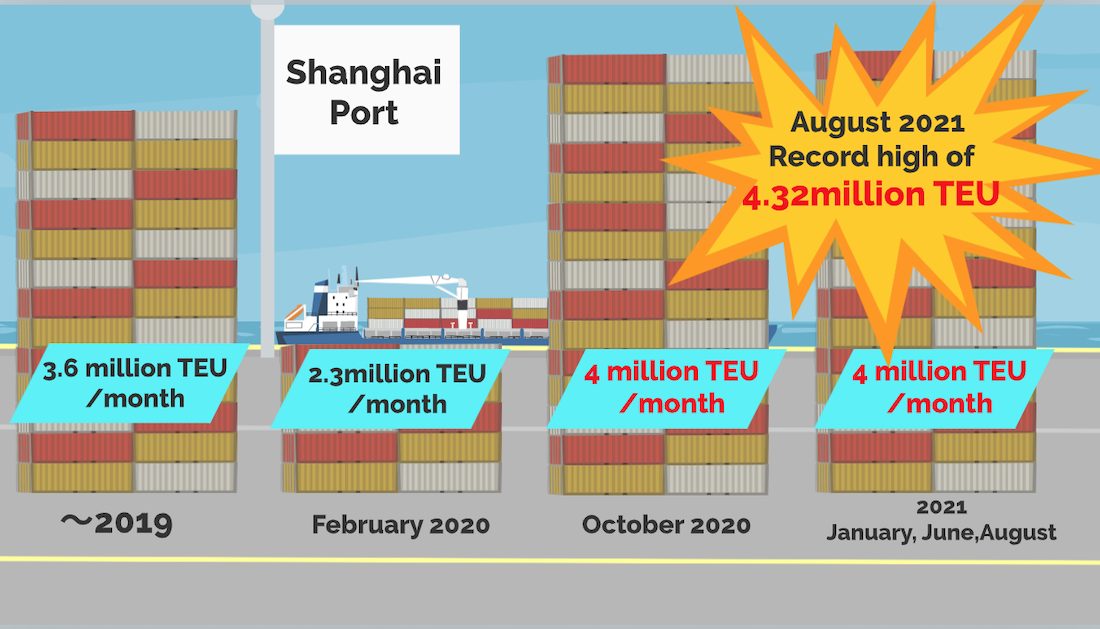 Through 2019, Shanghai Port handled an average of 3.6 million TEU per month.

Since the spread of Corona disaster, the volume dropped to a record low of 2.3 million TEU in February 2020 and then grew rapidly.

In August, it reached a record high of 4.32 million TEU. 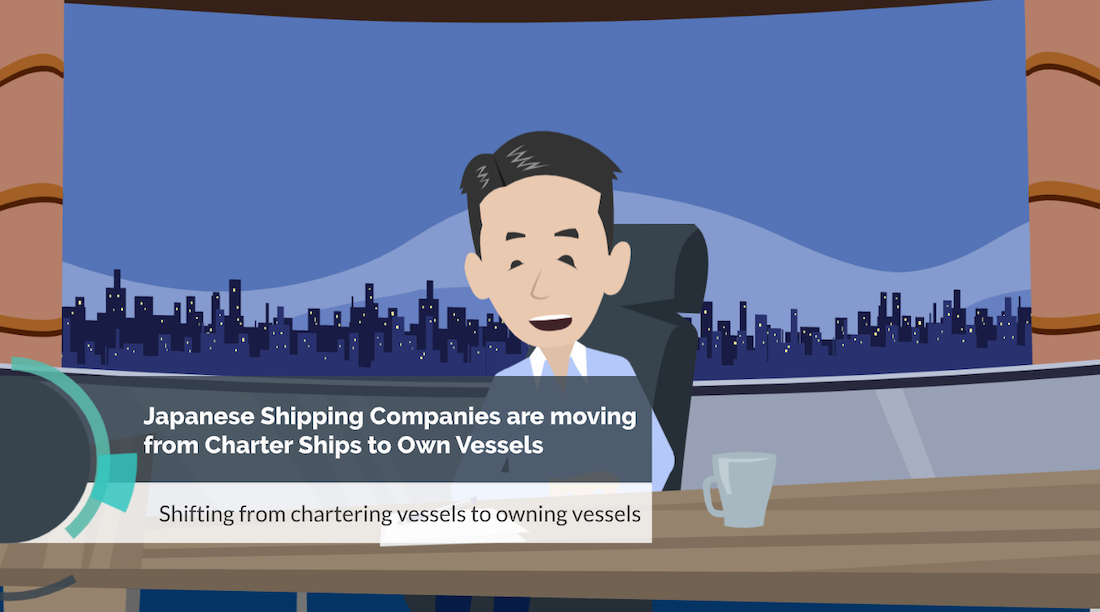 It seems that they apply the funds gained from the rising ocean freight rates for owning their own ship assets.

It is said that the financial strength of each shipping company has improved significantly and the need to charter vessels from shipowners is decreasing. 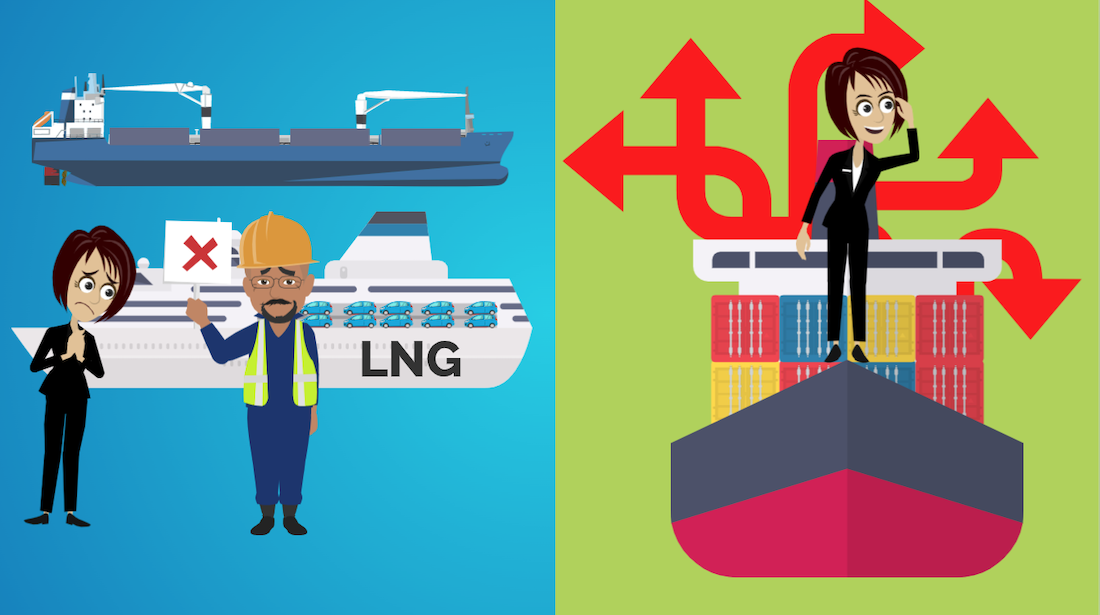 In addition, the another factor to encourage companies to own their vessles is that it is difficult to outsource the management of LNG fired car ships and large bulkers.

Compared to vessels chartered for medium to long term, owned vessels are more likely to be able to respond to market changes. 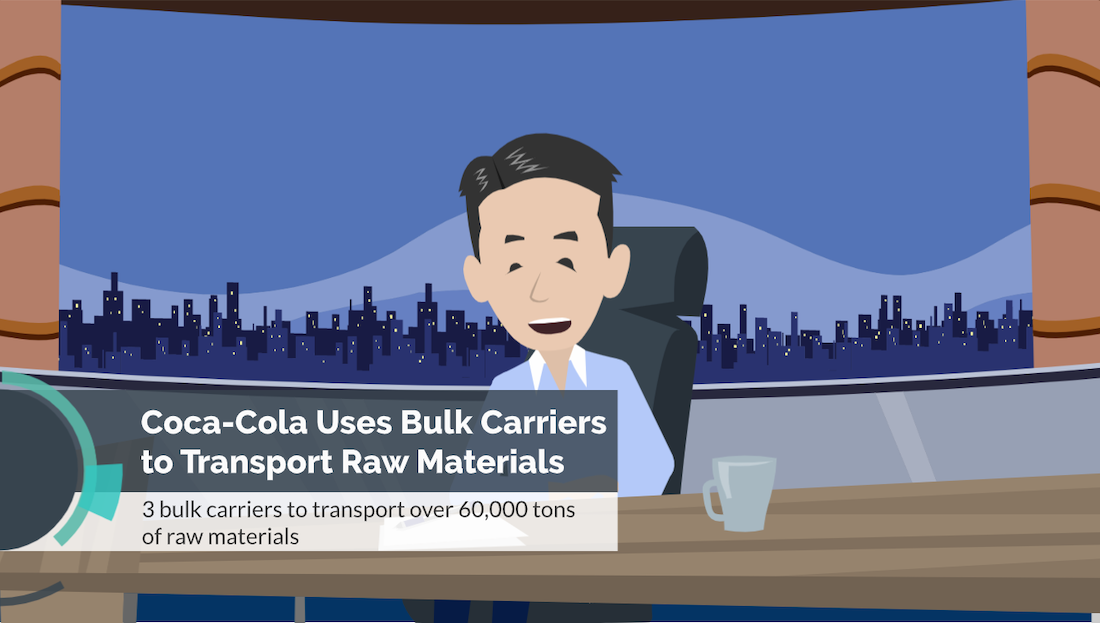 Coca-Cola in U.S. has decided to use three bulk carriers to transport over 60,000 tons of raw materials for its beverage products by sea. 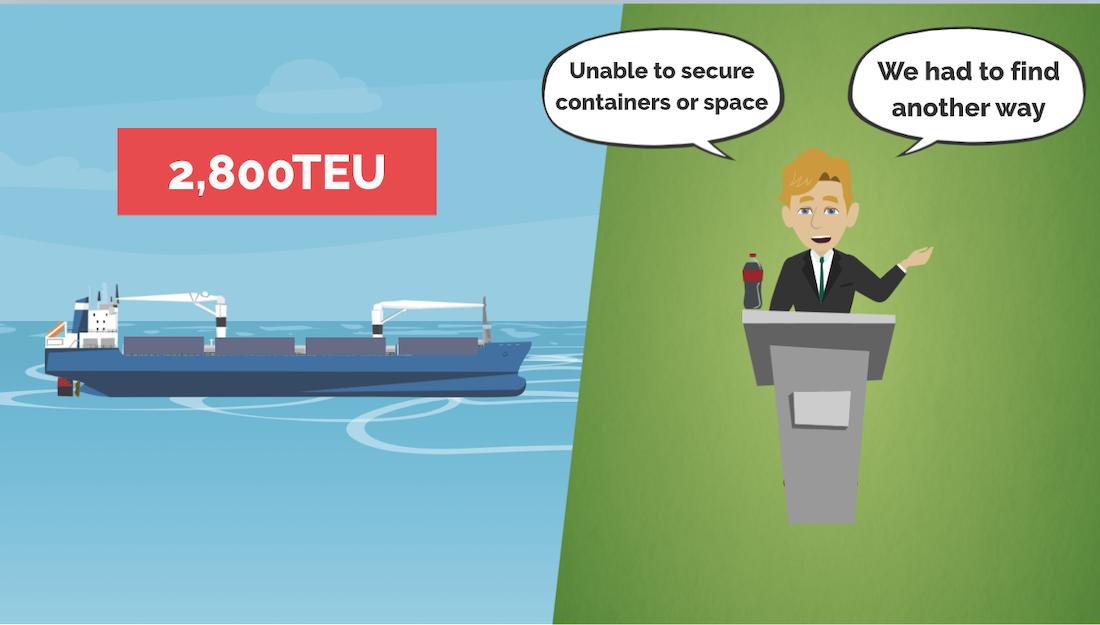 They chose to use bulker ships due to space shortage, as an alternative to the container ships that they had been using. This is the equivalent of 2,800 TEU of raw materials in a container.

The director of Coca-Cola procurement explained “We had to find another way with the current ocean freight crisis that we were unable to secure containers or space.” 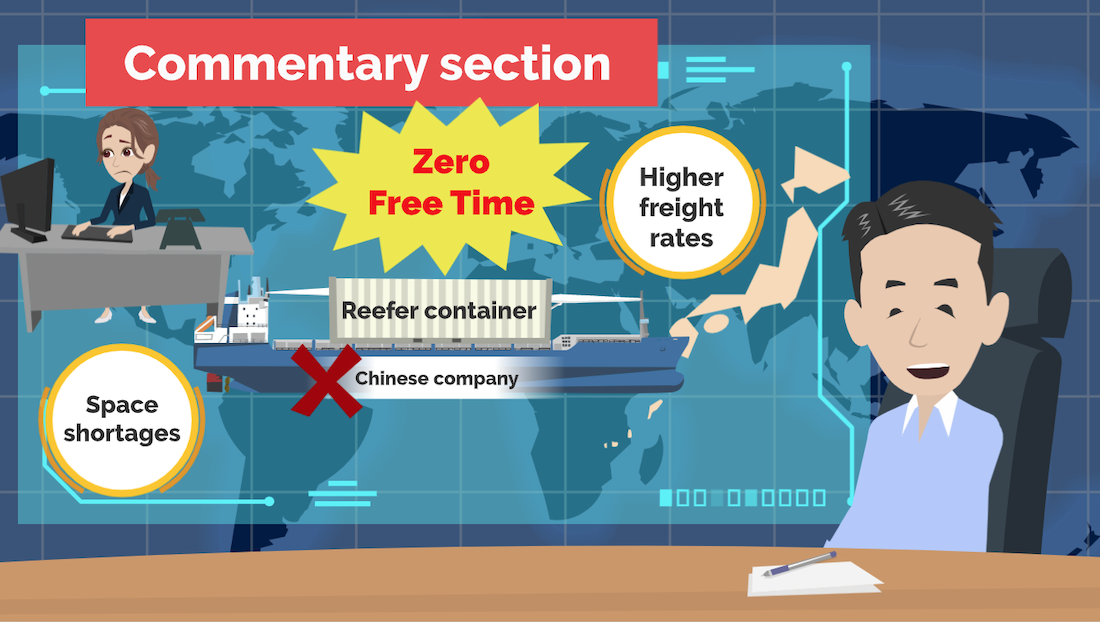 Now for the commentary section of this news.

Zero free time for reefer containers by Chinese shipping companies on routes between China and Japan which I reported at the beginning of this video is something that will have a considerable impact in practice.

This will increase the possibility that non-Chinese carriers will be chosen for reefer containers bound for Japan.

And this will cause uneven booking of space on vessels, which may lead to further space shortages and higher ocean freight rates. 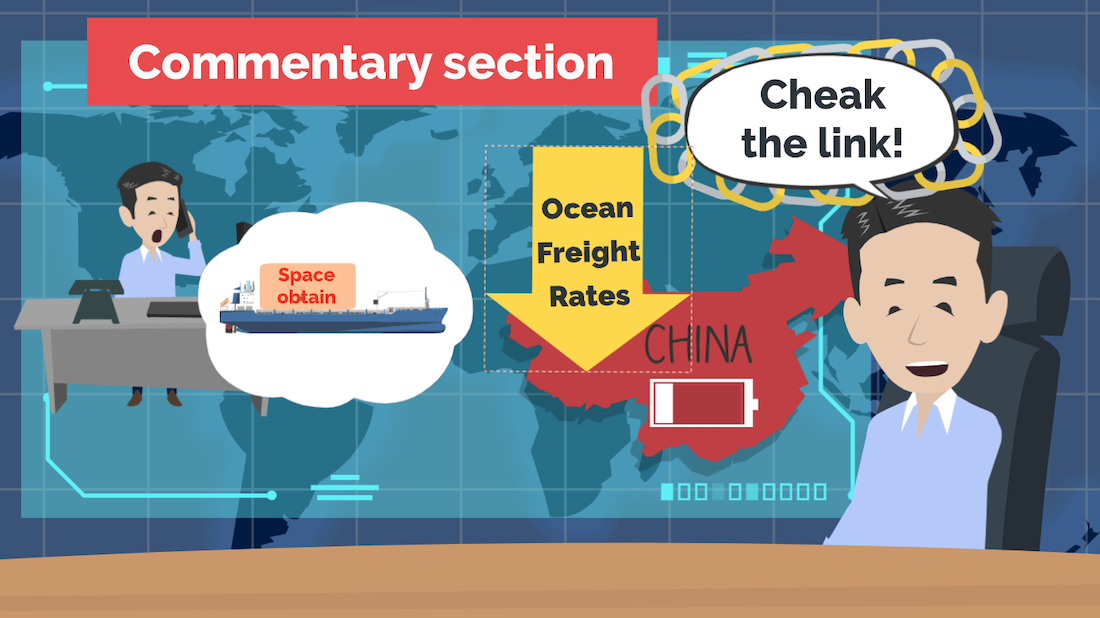 It was also surprising news that ocean freight rates plummeted around the National Day of China due to power shortages in China.

I, from a practice worker, remember being quite surprised that space suddenly became easier to obtain even if only temporarily.

About the detailed explanation of the impact of the Chinese power shortage on the supply chain is given, I talked on another video, which linked in the summary section.

Considerations for the Shipping Market Due to China’s Electricity Shortage 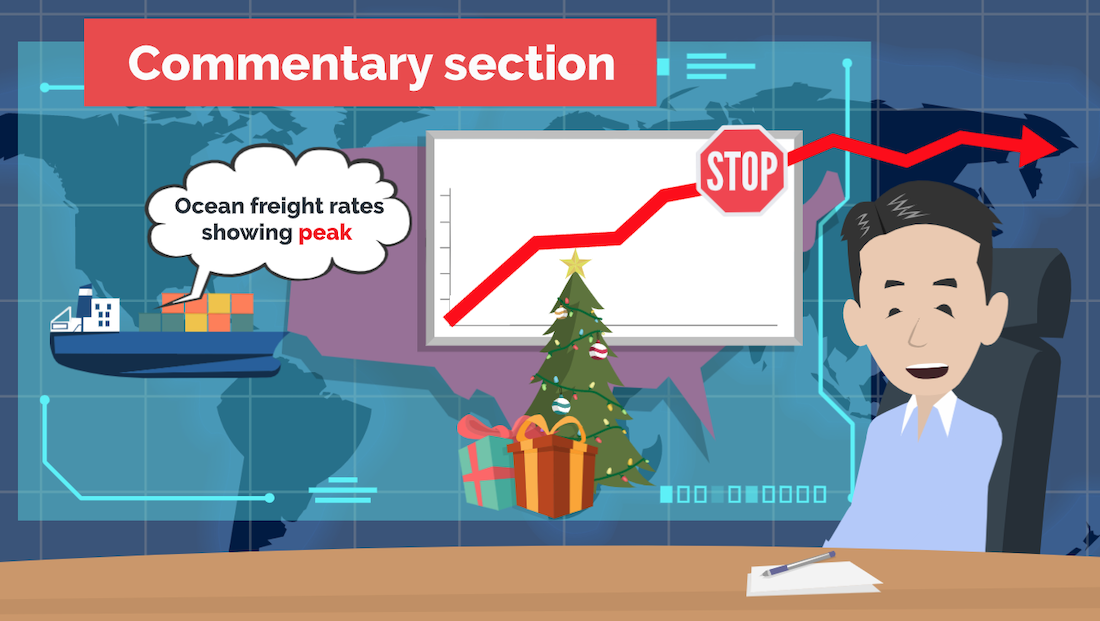 And since October, ocean freight rates to North America have been showing peak. In the past, we were worried about how long the price hikes would continue but it seems to had hit the ceiling finally.

Nevertheless, freight rates will remain high. Towards the end of the year, space will become even tighter and there may be a slight increase in freight rates. 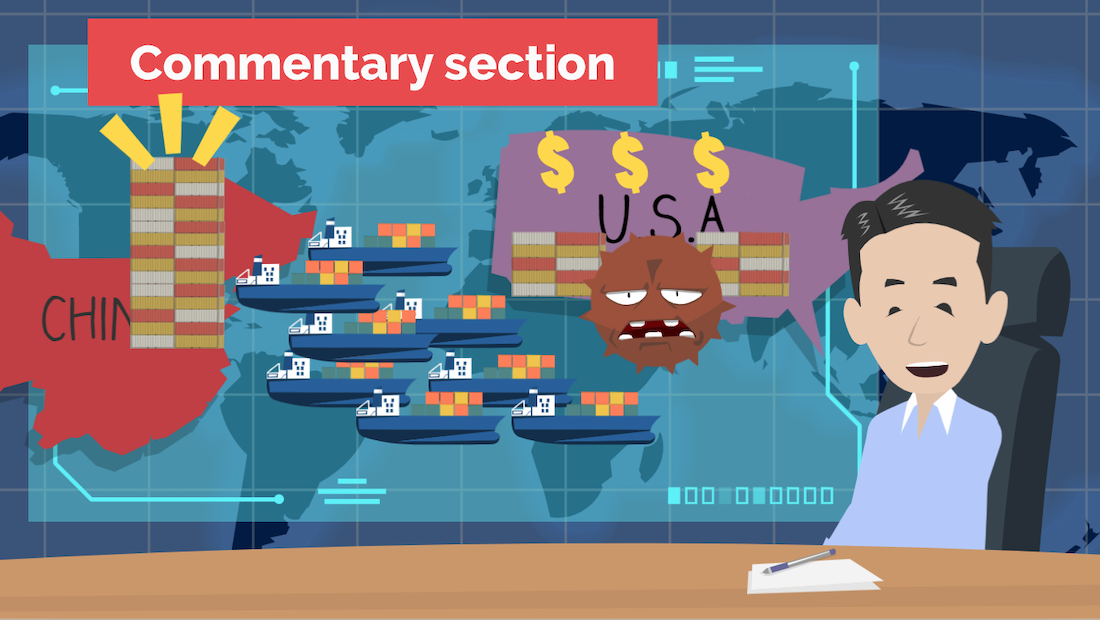 The news that record high container volumes being handled at Shanghai Port is largely due to the recovery of economic activity around the world especially in North America.

It is because not only there is a logistics congestion caused by Corona on the West Coast of North America and inland, but also the increase the volume of shipments was at an all-time high.

In order to break this logistics congesition, I think we need to pay attention not only to Corona, but also to the North American economy. 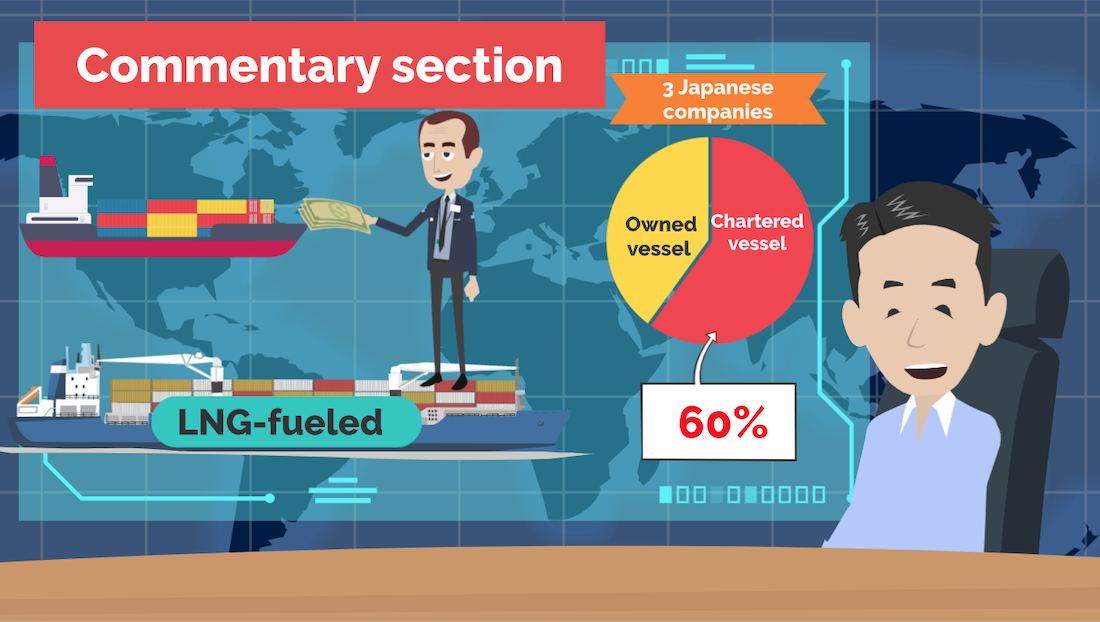 In 2021, shipping companies post record profits and investing its in their assets is noteworthy.

The three Japanese shipping companies so has been to use non-asset strategies to limit the percentage of vessels they own with 60% of chartered vessels.

However, they are investing in LNG-fueled container ships to make it easier to respond to changes in the chartering market and to decarbonize their operations.

By increasing the percentage of shipping companies owning their own vessels, I am also expecting a stabilization of ocean freight rates. 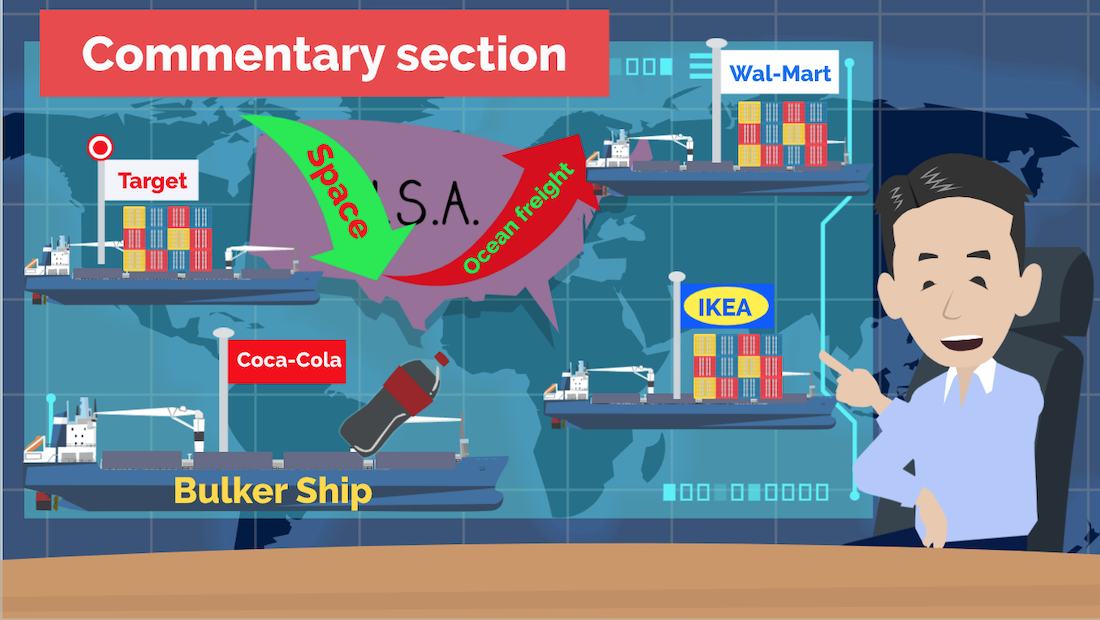 Lastly, it was noteworthy that Coca-Cola was transporting raw materials by bulker ships.

Due to the shortage of space on container ships bound for North America and soaring ocean freight rates, many major shippers have recently been chartering bulker ships to transport their products.

As far as I know, Wal-Mart, Target, Ikea and now Coca-Cola are using chartered vessels for transportation.

Wal-Mart, Target and IKEA have implemented a new method of transporting containers by balker ships. I believe that the demand for such chartered bulker ships will increase, if freight rates continue to rise. 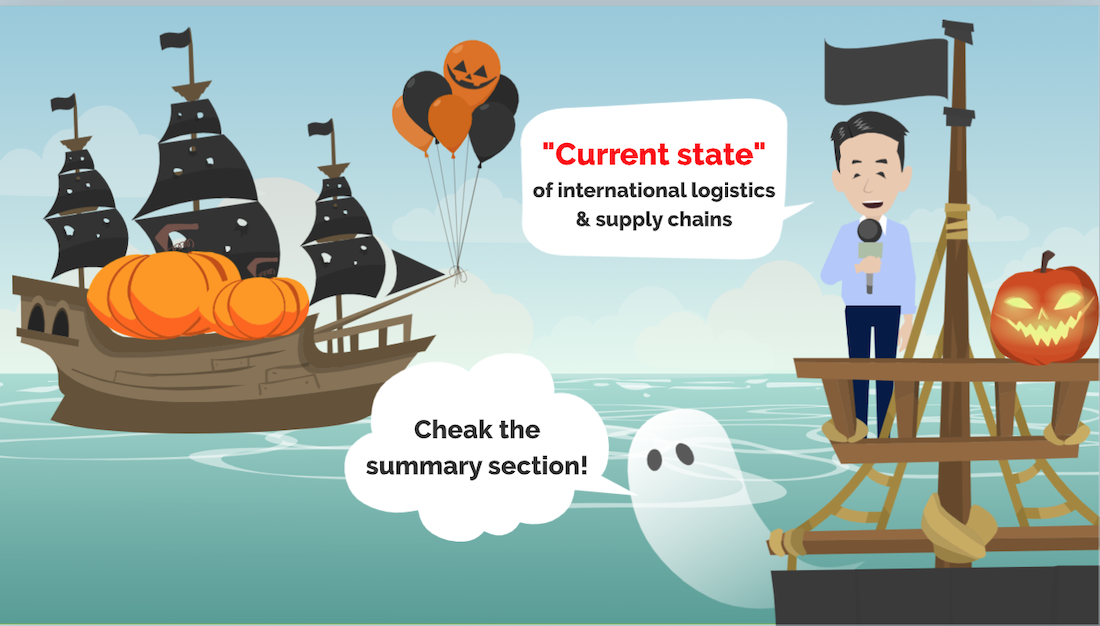 What did you think of Logistics News this time? I think you may have learned about the current state of international logistics and supply chains.

The sources of the news I referred to this time are linked in the summary section, so please refer to them for details.

That’s it from the field! Thank you very much for your time.