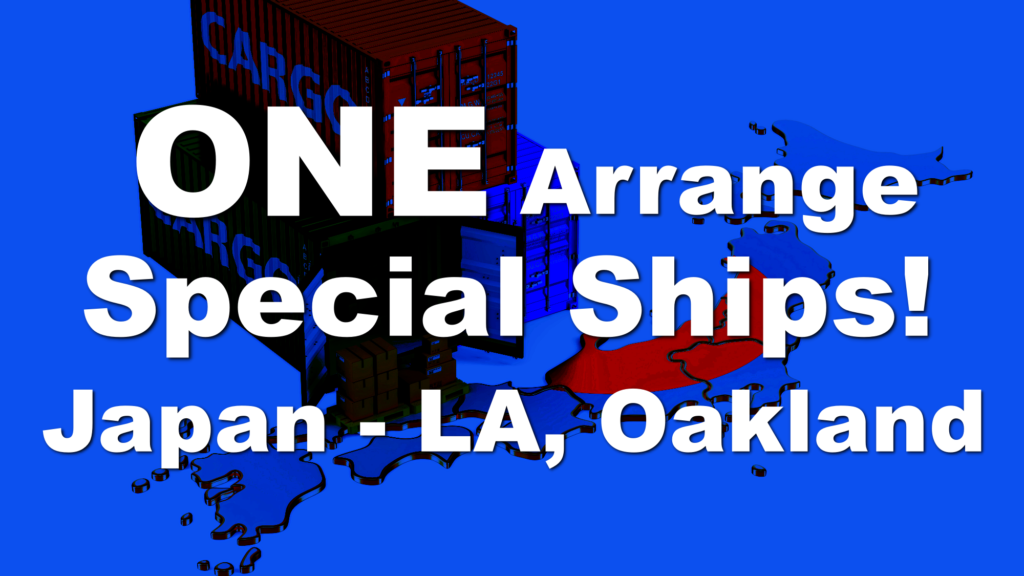 Today, I’d like to talk about, “ONE, special ships on Japan-North America West Coast.”

Ocean Network Express, ONE, will launch another special vessel on the Japan to North America West Coast route in late February.

Today, port congestion on the West Coast of North America is prolonged and service delays are the norm.

ONE’s vessels between Japan and the West Coast are also being cancelled due to significant schedule disruptions.

ONE is planning to launch additional special ships in early March in addition to this month.

A representative from ONE Japan said, “Depending on the situation in the West Coast ports, we will explore further temporary vessel and support them for our Japanese customers.”

The first temporary vessel to be deployed by ONE will be 2,500 TEU vessel with the following planned destinations.

This is the point. They plan to load only cargo originating from Japan.

Service between Japan and West Coast of North America

The normal Transit Time between Japan and the West Coast of North America is 35 days.

However, due to port congestion, it is now 70 days, double the normal time, and there have been many cancellations since the latter half of last year.

Since January of this year, service to North America has been virtually bi-weekly.

The worsening of the situation has been unstoppable, and there have been a number of cancellations here and there for the past two weeks.

ONE managed to decide on two temporary ships for North America after making adjustments with temporary diversions from other routes and ships after the regular inspection.

In addition to exports, the company will also transport as much as possible cargo imported from North America, which is directly connected to Japanese consumers.

Rail transportation to inland North America via the West Coast, which was greatly disrupted last summer, is now on an improving trend.

The loading of cargo to rail at West Coast ports has almost normalized to about two to three days after unloading.

The article also reported that the freight volume at Union Pacific Railroad’s Chicago Intermodal Facility Global 4, which is used by ONE, is also normalizing as it is now within its processing capacity.

I have the impression that one of the causes of congestion has been eliminated.

However, the port congestion, chassis shortage, driver shortage, and labor shortage have yet to be resolved.

In Japan, we have been unable to send to North America even if we wanted to. And as I mentioned earlier, ONE has been cancellations for the past two weeks.

I am glad that there is a Japanese shipping company. Thank you, ONE.