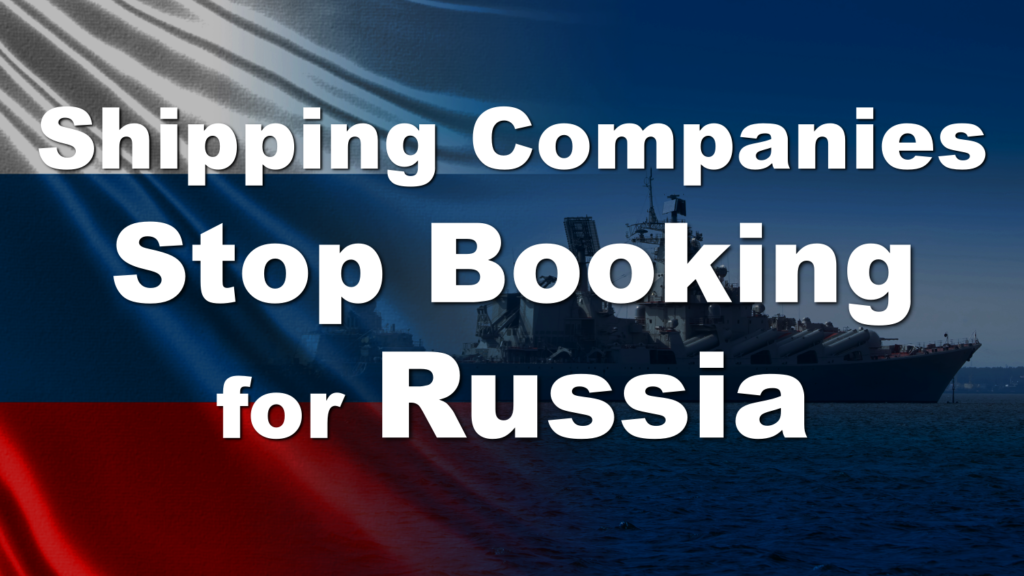 Today, I would like to talk about, “Container Shipping Companies Suspend Russian Shipments One after Another”.

Container Shipping Companies Halt Transport to and from Russia

In response to economic and other sanctions imposed on Russia by Western countries, container shipping companies are also moving to suspend shipments to and from Russia.

Maersk, MSC, CMA-CGM, ONE, Hapag-Lloyd, and others have successively suspended bookings for container services to and from Russia since March 1.

In addition, customs offices in Germany, the Netherlands and Belgium suspend customs clearance of cargo to and from St. Petersburg.

Trade with Russia is being blocked.

This means that no cargo will be sent to Russia and no cargo imported from Russia will be accepted.

Maersk announced that, “new bookings for sea, air and rail transport services to and from Russia will be temporarily suspended with the exception of food, clothing and humanitarian relief supplies.”

Daily necessities for Russian citizens are likely to be transported.

The exporter should be sorting the cargo by HS code. Perhaps there are alerts or automatic sorting for certain HS code.

Depending on the country, export customs clearance may take quite a long time.

Cargoes Bound for Russia in Transit

Shipping companies have stopped booking services to and from Russia, but are still coordinating which ports to land cargoes currently in transit.

However, it appears that some Nordic ports are refusing to temporarily unload cargoes bound for Russia.

They are concerned that if they allow temporary unloading, the cargo will stay in the ports for a long period of time, leading to port congestion.

Rail transport within Russia is still operating normally, but there are problems in connection with maritime transport.

This service combines Russian railroads with its own feeder vessels in the Baltic Sea to transport Far Eastern cargoes to Europe.

Suspension of Services by Japanese Distributor

Japan’s exclusive distributor, Trans Russia Agency Japan, notified its customers on March 2 that it will stop accepting shipments through this service.

This is a response to the suspension of customs clearance of import and export shipments to and from St. Petersburg by the German, Dutch and Belgian customs offices.

The Japanese distributor says, it will proceed with discussions with FESCO regarding the cargo in transit.

Rail Transportation of Other Forwarders

If rail service is suspended, there is a strong possibility that this volume will flow to ocean transport.

In the first half of last year alone, more than 300,000 TEU of containers were transported from China to Europe by rail.

However, I think we need to pay attention to the movements of forwarders from other countries.

I felt that the offshore waiting in North America was slightly better after the Chinese New Year, but this will certainly disrupt the shipping market again.

From a practical point of view, I think the situation has become quite severe.

I will update you with more information.