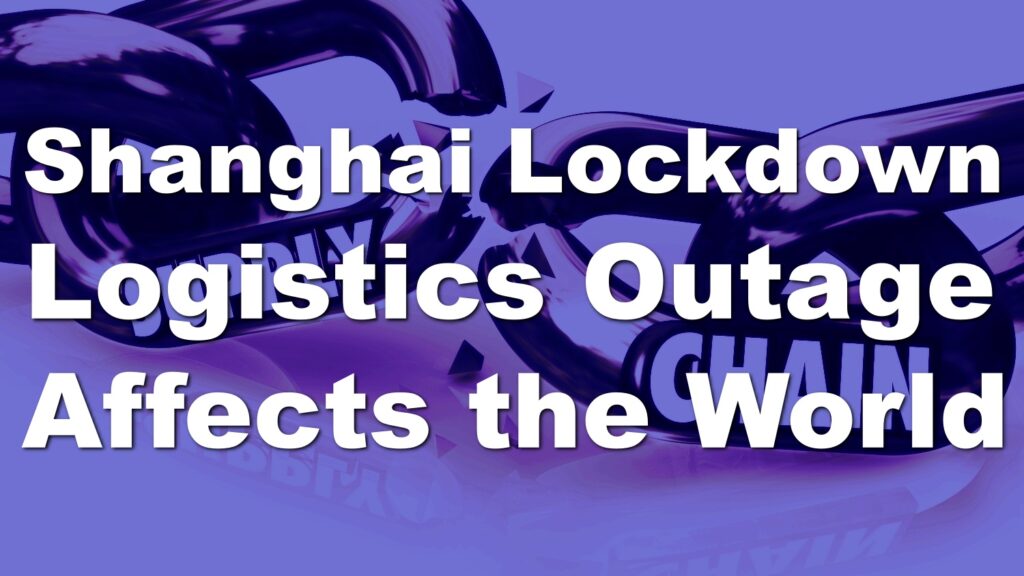 Today I would like to talk about, “Logistics in China is dysfunctional, 70% of Japanese companies in Shanghai are shut down”.

Logistics Dysfunction due to Shanghai Lockdown

The Shanghai lockdown has crippled logistics in and around Shanghai.

The Shanghai Japanese Commerce and Industry Club conducted a survey of approximately 70 member companies from April 9 to 12, and received responses from 53 of them.

There was response that “logistics between Shanghai and outside the city has been halted”.

Respondents indicated that a major factor in logistics stoppages is the shortage of truck drivers, PCR inspections and driver segregation when crossing provinces.

Even if trucks could be arranged, some said that district blockades and worker shortages made “shipping impractical.”

Many companies are unable to send or receive cargo, and their supply chains have been disrupted.

Due to the shortage of cargo handling workers as well as drivers, both the port and airport in Shanghai have experienced a significant drop in operations.

Some companies responded that domestic as well as international logistics in China have come to a complete halt.

Even when some operations are running, there are delays, and so on.

Some respondents to the survey were concerned that “if this situation continues, international logistics will come to a standstill, which will have a tremendous impact on trade.”

Air traffic has also been affected.

The space for air flights from Japan to Shanghai has been reduced to about half of its normal capacity.

It is difficult to carry cargo out of the airport and causing serious cargo backlogs in the sheds.

Impact on the Port of Shanghai

Furthermore, it appears that cargo is also continuing to be held up at the Port of Shanghai.

In some cases, arriving vessels are returning to the port of departure, and some respondents reported that the capacity of ports in the Shanghai vicinity is also limited.

In addition, customs clearance has also been suspended in some areas, and some are calling the current situation at the Port of Shanghai “practically closed.”

The article reports that the disruption of logistics functions is spreading across the country.

Some respondents to the survey indicated that their factories have suspended operations, and production in China and abroad has begun to be disrupted.

In some cases, sales channels have been lost to other companies in the same industry in other regions due to the inability to produce and deliver products.

In response, some companies are shifting production to other regions or outside of China.

The possibility of a second move to prepare for the China risk of a few years ago has also emerged.

Last time they moved production to Thailand, and I personally think Vietnam is next, since labor costs are higher in Thailand.

Once the lockdown in Shanghai is opened, maybe the halted cargo will start moving, production will start, and space will be harder to get.

I will continue to update as we get more information.