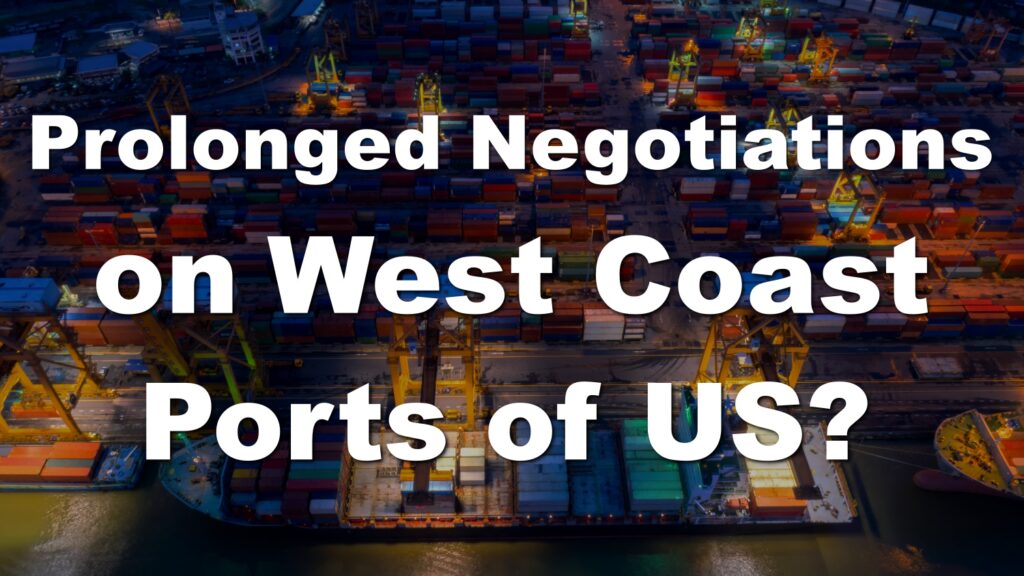 Today, I would like talk about, “Port Labor Negotiations on North America’s West Coast Bring New Complexities to the Supply Chain” from an article of Wall Street Journal.

Daily Logistics Radio by IINO san in 11th May 2022

Negotiations over a new contract for 22,400 dockworkers at 29 West Coast ports in North America reportedly could take months to resolve, raising additional concerns for U.S. importers and exporters.

Negotiations are set to begin this week. In the past, negotiations have been protracted, leading to major logistical disruptions and delays.

The article states that the risks are seldom as high as they are this year.

It has been two years since the tight supply chain caused by the Corona pandemic strained factory production, hampered retail sales, and pushed inflation to a 40-year high.

The current timing comes just as U.S. ports are clearing container ship backlogs and shipping freight rates, which had reached record levels, appear to be stabilizing.

Currently, with the Shanghai lockdown in place, the offshore waiting at ports of LA and LB is also being resolved and freight rates are softening.

However, according to shipping officials, the cargo transportation network remains fragile.

Talks could heat up and tensions could rise, especially since a new import rush is scheduled to hit ports at the peak season in this summer.

Generally speaking, July-September is the peak season in North America. There is a big movement of cargo before China’s National Day in October and Black Friday sales in November.

Importers of everything from furniture to toys and U.S. exporters of agricultural and other products are bracing for the potential impact, according to the report.

In two of the last three contract negotiations, in 2002 and 2014, labor and management disagreed, resulting in cargo delays.

It also caused individual manufacturers and retailers millions of dollars in lost revenue.

According to industry insiders and observers, the labor’s union will be in a stronger negotiating position than usual this time around.

The union’s workers continued to operate during the pandemic, handling record volumes of cargo.

Foreign-owned shipping companies, which own many of the port’s cargo handling facilities, cannot sue for lack of money because they made billions of dollars in a market where supply continues to outstrip demand.

The workers know the ports side are making money.

The White House, which has the authority to intervene if negotiations run into an impasse, is also seen as friendly to the labor side.

How Long Will Negotiations Last?

Few industry insiders believe that negotiations will be finalized before the current contract deadline of July 1.

However, there is optimism that an agreement will be reached by the end of the year, in part because of the narrow focus of the negotiations.

The last round of negotiations in 2014 took nine months to come together, with the White House eventually stepping in and resolving the issue over the course of the year.

As I mentioned in yesterday’s radio, shipping companies expect a 20-30% decline in profits for the current fiscal year.

The fact that profits are down 20-30%, even though freight rates are confirmed to be 2-3 times higher than the previous year, suggests that they are expecting a considerable drop in cargo volume.

The strike may have nothing to do with it, but we will not know the actual situation until we turn out the problem.

I am wondering if the decrease in profit is due to lower freight volume or if the supply chain will not be disrupted.

I will continue to confirm and disseminate information.