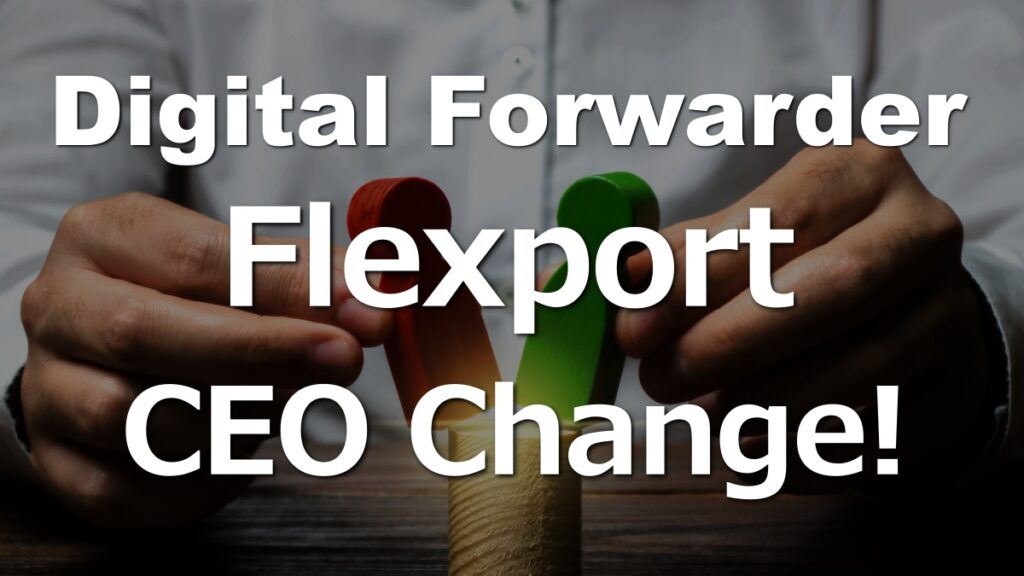 Today, I would like to talk about ‘Flexport’s CEO change doesn’t really progress much.’

There has been some big news in the U.S. logistics industry.

Flexport founder Ryan Petersen announced that he will step down as CEO of Flexport in March 2023 and will be replaced by former Amazon logistics head Dave Clark.

This unexpected CEO change seems to indicate that Flexport is attracting strong talent, but also that it has been slower than expected to gain market share, despite billions of dollars of venture capital backing.

Clark suggested that it will take five years to make Flexport “the best supply chain company in the world,” and in the process it will be pitted against the old Amazon.

Petersen said, “Dave excels at what it takes to win at the next stage.”

The current valuation of Flexport is estimated at $8 billion.

Privately held Flexport is expected to reach self-reported sales of $3.3 billion in 2021 and topline sales of nearly $5 billion in 2022 when it announced its latest round of financing on February 7.

The Forbes report on this management change also noted that of the $2.3 billion raised to date, at least $1 billion is “in the bank.”

In addition, Flexport has 3,500 employees worldwide. For reference, this is well below Kühne & Nagel’s 78,000 employees.

Flexport has a marketing presence rather than market share.

It is the 15th largest NVOCC in January-August on the Eastbound Trans-Pacific route, its main shipping lane, and has yet to achieve global status.

Handling volume for the period was up 37.6% year over year, and Flexport grew as other companies did, but it does not appear to be in a position to challenge for the top spot.

Other forwarders’ initial concerns about the threat of using software as a differentiator for Flexport has faded in recent years.

Various forwarders have stated that they do not encounter Flexport in the market very often, and it does not appear to be a competitor.

From these interviews with stakeholders, we can see that Flexport’s market share growth may still be behind schedule.

Founded in 2013, the company has grown revenue significantly over the past decade, but not to the point of providing paradigm-shifting technology to a market that is standing still.

Flexport faces not only the rise of Amazon, but also competition from digitally native forwarders in other regions, including European forwarders.

Mr. Clark, the Next CEO

Dave Clark, is a 23-year veteran of Amazon’s global logistics powerhouse and of serving the needs of Amazon’s marketplace sellers.

More recently, he has been involved in third-party logistics, including trucking, ocean freight, and trade compliance, serving shippers who do not sell on Amazon’s marketplace.

On social media, Flexport has been ridiculed for being only a standard forwarder, albeit a strong one in marketing.

And like other forwarders, it has to devote huge amounts of manpower to solving problems that cannot be solved by automation.

However, I feel that the confusion caused by the Corona disaster cannot be solved by automation.

Flexport has also become a flagship in the logistics technology space during this time, serving as a reference not only for existing forwarders, but also for other technology players.

Not a few mid-sized forwarders confide that the advent of Flexport has forced them to focus on technology.

It has helped small and medium-sized forwarders automate.

In addition, it has revitalized an entire industry of logistics technology providers dedicated to defending themselves against large, technologically advanced forwarders like Flexport.

Technology Alone is Not Enough to Survive

From this article, I felt I saw the reality of the start-up digital forwarders.

This industry is not one where you can get market share by adding technology.

As I broadcasted recently, Kühne & Nagel is, of course, developing technology, and the major Japanese forwarders are also developing platforms.

One of the key points is the relationship with the shipping companies to ensure space.

NVOCC do not have ships, so we need to be able to negotiate with shipping companies.

With Dave Clark at the top, I feel that the ability to build the entire supply chain is required of forwarders.

In the logistics industory, it will be difficult to go from being an unknown YouTuber or TikTok to the top player in the media world in one fell swoop.

Developing platforms alone will not cause a paradigm shift.