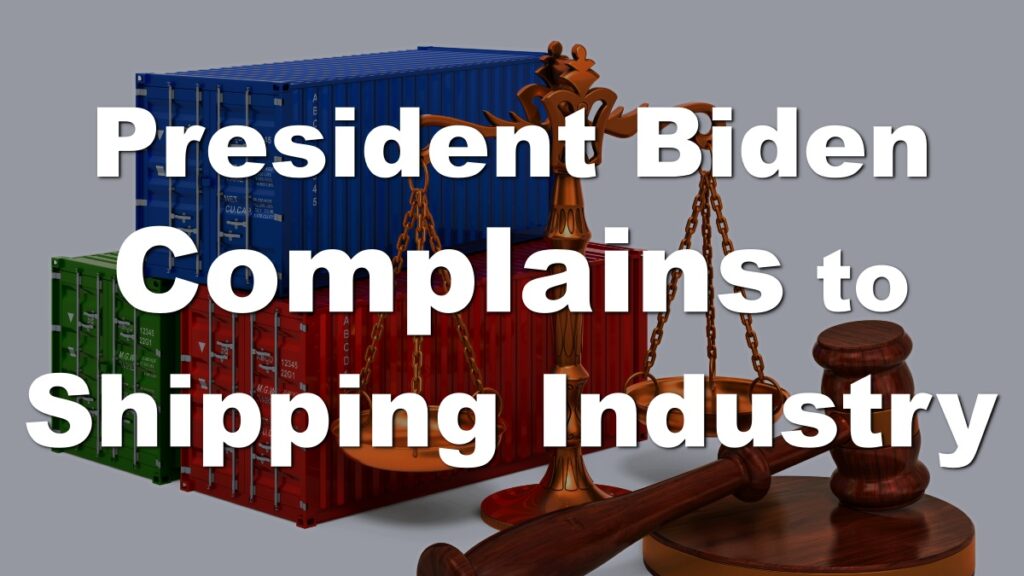 Today, I would like to talk about “Congress May Tighten Shipping Regulations as U.S. President Biden Complains about Shipping Industry.”

For the first time in 24 years, shipping regulations may be overhauled in North America as freight rates soar and supply chains are disrupted.

The White House and U.S. importers and exporters have noted that historically high freight costs are hampering business and accelerating inflation.

That’s why the U.S. Congress is about to take up a measure that would add new regulations to the shipping industry.

The measure would make it tougher for shipping companies to reject export cargo.

Why is this type of measure being taken up?

Because over the past two years shipping companies have been trying to quickly return empty containers back to Asia and profit from the Asian to North American dollar route.

It is faster and more profitable to return empty containers to China.

President Biden, however, emphasized the problem, calling on Congress to “crack down” on maritime shipping companies.

Biden, a Democrat, said that one of the main reasons shipping costs have risen is because nine shipping lines have taken control of the trans-Pacific market and “raised prices by as much as 1,000%.”

Speaking at the Port of Los Angeles on Friday, June 10, Biden said that it is time to let the ocean shipping companies “know that the rip-off is over.”

He continued, “One of the key ways to combat inflation is to lower the cost of moving goods through the supply chain.”

Measures to be Taken for Support

The shipping industry is completely under the radar.

Inflation measures will also have a significant impact on President Biden’s approval rating.

Since the U.S. midterm elections are scheduled to take place in November and President Biden’s approval rating has been falling since he took office.

Therefore, the shipping industry is being singled out as a cause of inflation as a way to counter inflation.

North American agricultural exporters say they missed out on billions of dollars in revenue last year because ocean carriers refused to transport their produce and rushed empty containers to Asia.

Importers say they were charged hefty penalties for failing to pick up and return containers, even on days when congested port facilities refused to handle them.

The shipping companies were relentless in charging demurrage.

In response to these kinds of things, North American regulators reached a $2 million settlement with Germany’s Hapag-Lloyd AG for improperly collecting such fees.

Is the Maritime Transportation Industry a Contributor to Inflation?

Biden blames the lack of competition in the maritime shipping industry for high costs in the supply chain, where inflation is at a 40-year high.

This is true if you only look at the last two years, but before Corona pandemic, there was a lot of competition and shipping companies were consolidating in order to survive.

The situation seems to completely ignore that.

This bill in Congress would be the biggest overhaul of ocean shipping regulations since 1998.

In response, Christine McDaniel, an international trade specialist at George Mason University, noted that the regulatory overhaul could have unintended consequences for the shipping industry’s financial base, which had been struggling for several years.

For example, provisions aimed at preventing ocean carriers from unduly reducing exports would have a negative impact on the financial base of shipping companies.

McDaniel said, “There is concern that the government will dictate to shipping companies what they can and cannot do, or what they must and must not do.”

If this bill passes, it will have a major impact on shipping company operations.

We do not know where, but there will be a container shortage in some areas.

President Biden may also be quick to enter into labor negotiations on the West Coast of North America to restore his approval ratings.

Depending on how the U.S. government comes out, supply chain disruptions may not be that disruptive.

Container shortages may be more pronounced in some regions, but I will continue to update you on U.S. developments.