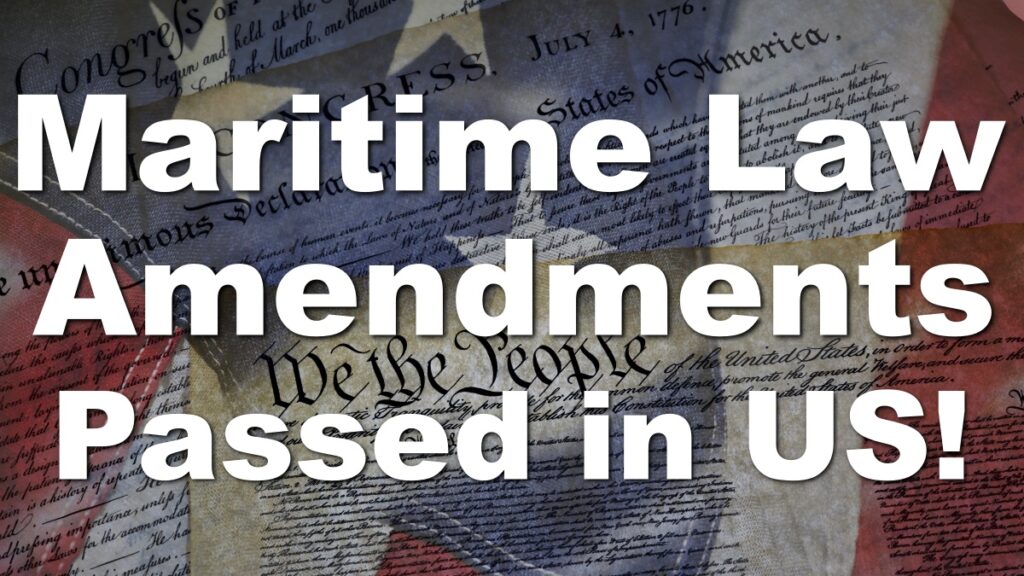 Today, I would like to talk about, “Maritime Law Amendment Bill Passed by the House of Representatives in the U.S., to be Passed by the End of the Month.”

A bipartisan group in the U.S. Congress submitted to the U.S. House of Representatives a bill to amend the Maritime Act, which was passed by a majority vote on March 13, 2012.

The proposed amendment to the Maritime Act is a revised version of a bill passed by the House of Representatives in December of last year.

White House welcomed the passage of the bill in a statement, and it is expected to be signed into law by President Biden within the month.

The newly enacted Maritime Law Amendment Bill is the same as the one passed by the Senate in March of this year.

Senate and House of Representatives

Incidentally, there is no difference between the U.S. Senate and the U.S. House of Representatives, but the formation of Congress is different.

The U.S. Senate has two elected representatives from each state to fill two seats, while the House of Representatives is a nationally elected body, regardless of state.

In this case, the House of Representatives passed the bill and now it is up to President Biden to sign it into law.

Contents of the Proposed Revision

The main item in the proposed revision is to strengthen the oversight of FMC, Federal Maritime Commission, and to require compliance with FMC with respect to the imposition of demurrage and detentions by shipping companies.

The demurrage and detentions from shipping companies during the turmoil of the Corona pandemic in North America may have been unwarranted.

While containers could not be removed due to a shortage of port workers and chassis, the shipping companies were relentless in their claims.

The original bill passed by the House of Representatives last December on other items was quite radical, requiring shipping companies to provide services to shippers and making it illegal for them to refuse to do so.

However, the revised proposal is vague, stating only that “unreasonable refusal or discriminatory acts are prohibited” with regard to the provision of services by shipping companies.

It is expected that FMC will compile the detailed regulations for actual operation in the future.

As I mentioned recently, the bill would restrict bookings from the U.S. because shipping lines wanted to return empty containers to Asia as quickly as possible.

WSC, World Shipping Council, the shipping lines’ organization, issued a statement regarding the passage of the bill, saying that it would like to promote a productive dialogue with FMC to minimize supply chain disruptions.

WSC, the shipping lines’ organization, then emphasized that since the Corona pandemic, container shipping companies have invested in meeting demand by ordering 555 vessels in 2021 and 208 vessels in 2022.

It also noted that ports and other land-based infrastructure cannot meet demand in its current state, and implicitly pointed out that the problems in the supply chain are on the land side.

Nevertheless, the bill is certainly on its way to passage.

Midterm elections are coming up in the U.S. in November, and inflation is affecting President Biden’s approval rating.

President Biden has attributed one of the factors for inflation to shipping company rip-offs, for more details, please listen to my recent radio.

What will happen to the supply chain this year as a result of the passage of this bill?

As I discussed in my previous radio, we do not expect early return of empty containers from North America.

It is also possible that White House will come in to mediate labor-management negotiations at West Coast ports before the midterm elections.

If that happens, the supply chain may not be so disrupted.

We don’t know what will happen yet, but I believe that the passage of the bill in the House of Representatives will be the catalyst for a different movement than last year.

I will continue to update you on developments in North America.