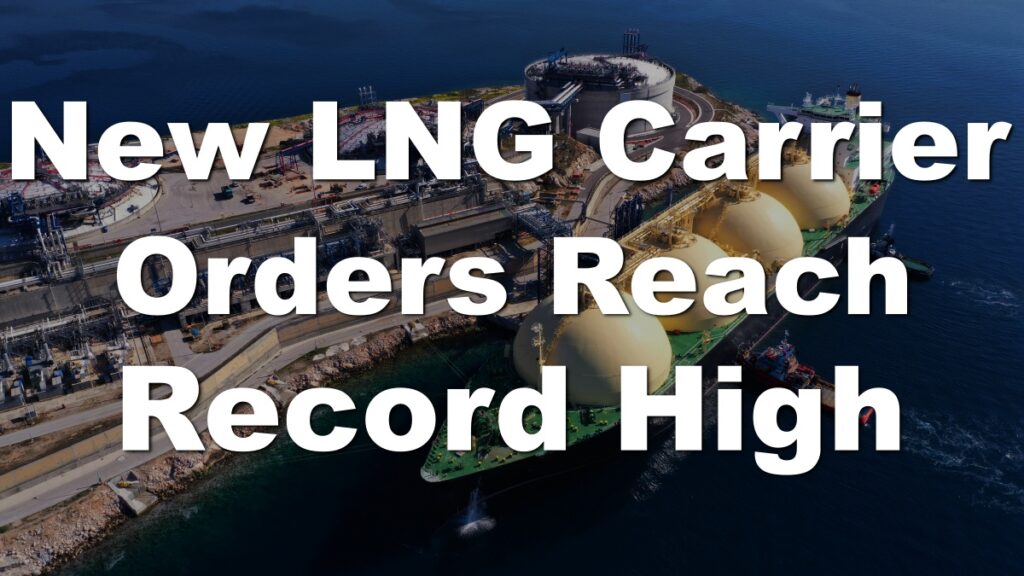 Today, I would like to talk about, “New LNG Carrier Orders Surge. Newbuild orders for LNG carriers reached a record high in six months.”

Surge in Orders for LNG Carriers

According to Clarkson Research from UK, the number of new LNG carriers ordered since the beginning of this year has reached 94, breaking the previous record of 86 vessels ordered for the first year of 2021 in just six months.

In addition to the materialization of a large-scale project by Qatar Energy, Qatar’s state-owned oil and gas company, orders for LNG carriers appear to be increasing in anticipation of increased cargo movement to Europe, which is becoming less dependent on Russia for its energy needs.

And the company plans to increase this capacity by 32 million tons per year through a series of facility start-ups beginning in 2026.

Another large-scale production increase project is also in the works and is scheduled to begin operations in 2027.

Once these two projects are completed, Qatar will have a domestic production capacity of 126 million tons per year.

It is more than the United States and Australia, which currently compete with Qatar as the top exporter.

It is said that the projects will inevitably have an impact on energy geopolitics.

Of the increased production, Qatar intends to sell half to Europe and half to Asia.

Europe is looking to procure LNG from Qatar as it seeks to move away from Russian LNG in the wake of the situation in Ukraine.

Qatar Energy is planning to increase its fleet of ships to transport LNG by about 100 vessels.

Other factors that appear to be prompting EU countries to order LNG carriers include a reduction in imports of Russian natural gas and an increase in imports of LNG from North America and other sources.

In order to switch to imports from North America, the Middle East, Africa, and other regions, LNG carriers for marine transportation will be needed.

Against this backdrop, the price of LNG carriers has also risen by about 10%.

In addition to higher prices for materials and equipment, shipbuilders are placing more orders for large container vessels, which compete with LNG carriers for ship orders.

Furthermore, there is less room for orders for LNG carriers, which is also pushing up prices.

With demand for LNG transport expected to rise, such as to Europe, some LNG carriers wanting to secure a stable means of transport are likely to sign long-term charter contracts with some companies for 7-10 years.

How Long will De-Russia Last?

The de-Russia has brought a lot of attention to LNG procurement, but what will happen in the medium to long term?

If there is a change of government in Russia, will LNG trade not return? There is also a question.

If LNG deal with Russia and the EU were to return, the price of LNG would plummet and ships would not be able to hold it.

By that time, other clean energy production might be on the rise.

This article made me realize that the market is changing dramatically because of the de-Russia.