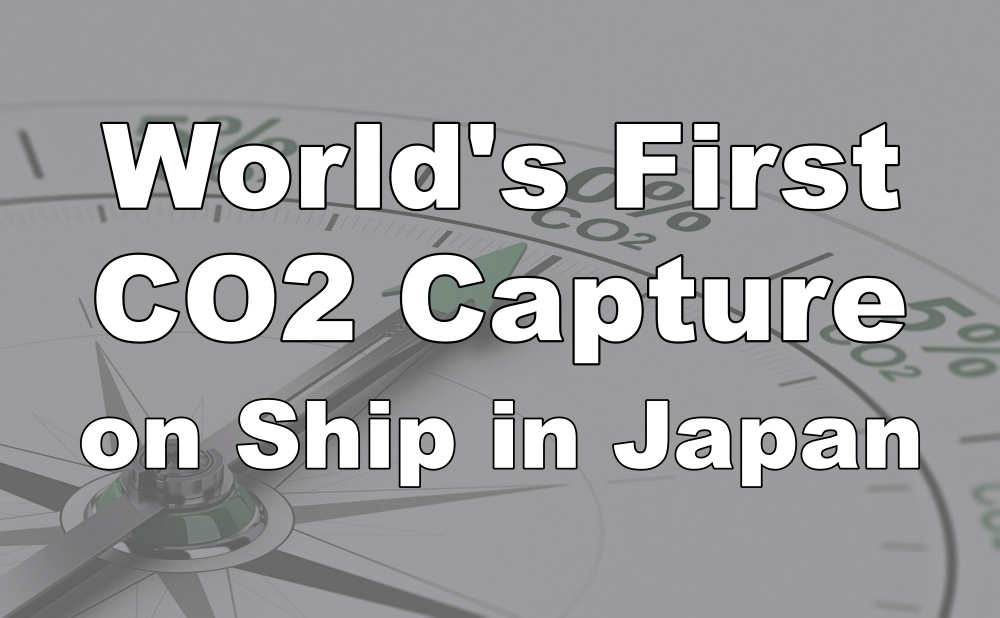 Today, I would like to talk about the theme, “Kawasaki Kisen Kaisha, Mitsubishi Shipbuilding and Class NK succeed in capturing CO2 on board for the first time in the world” with some discussion.

Successed Capture of CO2 on Ship in Japan

CO2 capture on land has already been established, but this is the first time in the world that CO2 has been captured at sea.

On October 20th, Kawasaki Kisen Kaisha, Ltd. and Mitsubishi Shipbuilding Corporation, in cooperation with Class NK, announced that they have successfully conducted a demonstration test of CO2 separation and capturing on board a ship.

It separates and captures 99.9% pure CO2 from the exhaust gas of the engine, and the company plans to focus on research, development and sorting out issues for commercial use.

How to Separate and Capture CO2

In decarbonization, our focus has been on not emitting CO2. But in reality, it is captured and stored. The Ministry of the Environment is currently working on Carbon Dioxide Capture, Utilization and Storage (CCUS).

At the first international conference on CO2 capture held in Amsterdam in 1992, there was already a movement for CO2 capture.

Since 2005, CCS (CO2 capture and storage) technology has become a reality.

As for the method of separation and capture, CO2 is soluble in water, so it can be separated and captured by heating it in a special liquid. Recently, a method of trapping it in a solid absorber has also emerged.

Mitsubishi Heavy Industries is well known for its CO2 separation and capture equipment. The company has installed recovery equipment in 14 locations around the world, and holds over 70% of the market share.

The captured CO2 is transported by pipeline and compressed, and stored in underground reservoirs.

However, there is a limit to where we can store it. At the current level of CO2 emissions, it is said that the world can store enough CO2 for 65 to 100 years.

In Japan, there is CO2 capture and storage facility in Tomakomai, Hokkaido.

Another option to store it is to liquefy CO2 and transport it by sea. It costs about USD30 per ton of CO2 to collect, pipe to the storage site, and inject it.

Also, as we talked about earlier, the area (geological formation) for storage is limited.

If the distance between the collection point and the storage area is far, marine transportation may be less expensive than pipelines.

There are only five liquefied CO2 ships in the world, and all are managed by the Norwegian shipping company Larvik Shipping.

Originally, the ships were operated for drinking gas and other purposes. With the recent commercialization of CCUS and CCS, there has been a lot of attention worldwide.

Mitsui O.S.K. Lines has invested in Larvik and entered the liquefied CO2 transportation business, and is also developing liquefied CO2 carriers in Japan.

When the distance from the CO2 capture point to the storage site is about 100 to 200 kilometers, the cost of marine transportation is lower than that of pipelines.

The average cost of CCS in the world is about USD80 to USD100 per ton of CO2 to get it into the ground. Of this, about USD60 to USD70 is accounted for by the separation and capturing process, and there is an urgent need to reduce the cost of this process.

Separation and capturing technologies are also being developed to reduce costs. Japan is now aiming for USD10 per ton by 2050.

Attention to Effective Utilization of CO2

In recent years, due to the development of technology, there is a movement not only to capture and store, CCS, but also to use it effectively, CCUS is also important.

CO2 can be used to feed plants and vegetables in greenhouses, and to produce basic chemicals (methane, methanol, olefins, etc.). Methanol has been attracting attention as a marine fuel, Maersk is also building methanol-fired ships.

In the future, the reduction of CO2 emissions will be even stronger.

In order to achieve this goal, corporations, venture capitalists, and other investors have begun investing in and partnering with CCUS companies. In 2021, CCUS companies are expected to triple their funding from the previous year, reaching USD1.1 billion.

In terms of decarbonization, capture and storage is taking place, but there is also a limit to where it can store.

As I said at the beginning of this video, we have succeeded in recovering them at sea, so I think we will have to pay attention to CO2 Capture in the future.