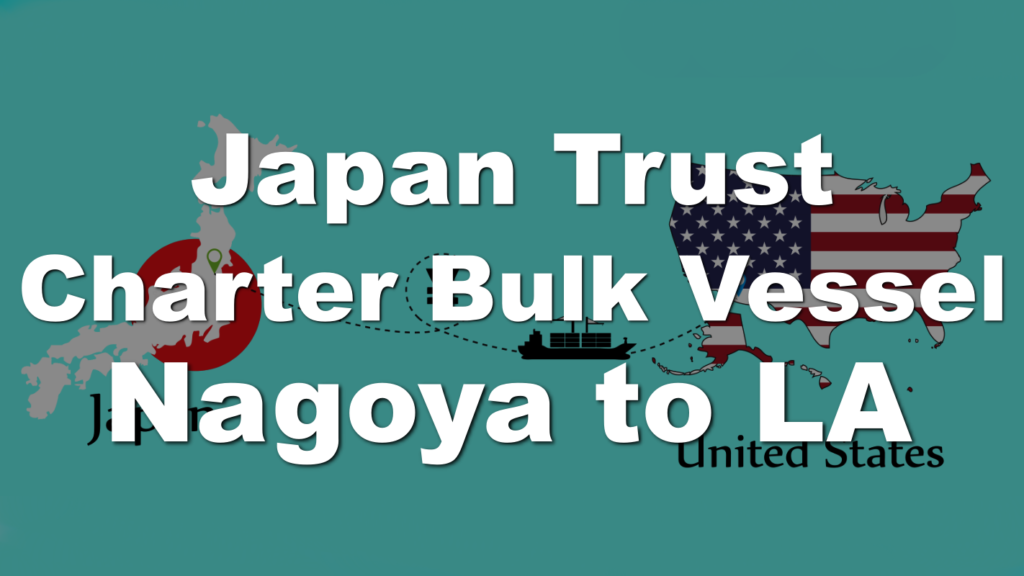 Today, I would like to talk about, “Japan Trust to transport cargo to the West Coast of North America by bulk vessel, loading in Nagoya in March”.

It is an independent forwarder that specializes in transporting mainly over-gauge cargo.

Mr. Suga is a very energetic president, and I have talked to him three times online.

I believe that we are similar in many ways, such as the structure of its websites and creating its own line stamps.

He is a president who is trying new things, such as doing crowdfunding.

Japan Trust is planning to transport cargo from Port of Nagoya to Port of Los Angeles by bulk vessel at the end of March.

The port congestion of LA is in a serious situation, and it was reported a while ago that there were 100 ships waiting offshore.

When I had a conversation with a person from Detroit the other day, she said that a 1-2 month delay is normal.

The transit time from Japan to port of LA is about 20 days.

In addition to heavy items and machine tools that require special containers, they also accept cargo that normally requires dry containers. They do not handle dangerous goods.

In addition, the company also handles door delivery, packaging, and storage, and SOC, shipper’s container, shipping is available upon request.

Experience of Chartering a Bulk Vessel

To date, the following three shipments have been transported to North America by charter on bulk vessels.

According to President Suga, in the midst of the container transportation chaos, “By creating space for us, we can avoid a situation where we are fighting for the limited capacity and someone else is in trouble.”

Bulk ships have less risk of waiting offshore, and the past three shipments have been smooth.

Taking advantage of the strength of an owner-operated company, it is also able to arrange risk-taking transportation.

Provide Services Even at High Risk

Recently, I’ve been introducing a lot of companies to you, but it is not corporate project.

I’m just introducing you to companies that I have connections with.

If they don’t get enough cargo, they will lose a lot of money, but even if they take that much risk, providing a service that is needed. I think they are a very dynamic company.

The shipping requirements for LA this time are to submit the packing list by February 15 and carry the cargo into the terminal by March 18.

If you are having trouble getting a space for LA, why not contact Japan Trust?

That’s all for today. Thank you!